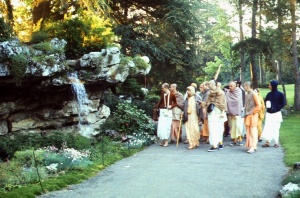 (translated into French throughout)

Prabhupāda: The original consciousness is that I am part and parcel of Kṛṣṇa. Just like at the present moment we are thinking, "I am Frenchman," "I am Englishman," "I am Indian," "I am American." Just like there are different consciousness, but the original consciousness is "I am Kṛṣṇa's." So the present civilization is missing a very important point. They are accepting this body as the self, but actually this is not the fact. I am spirit soul. I am Brahman, or part and parcel of Kṛṣṇa.

So this Movement is reviving the original consciousness. And by missing this consciousness—"I am the spirit soul"—I am transmigrating from one body to another. Today I am a Frenchman, but tomorrow I may be something else. There are 8,400,000 species of life. I can . . . after quitting this body I can be transferred to any one of the species of life. That point we are missing. So this process is to get out of the designation. Just like I am spirit soul, but due to my this body, I am thinking I am Indian. So this designation has to be changed. Then we are purified.

We are engaged in some sort of service, every one of us, but that service is now being rendered within that designation. But when we are freed from the designation, when we are purified, then our service to Kṛṣṇa becomes bona fide, and that is the real standard of peace.

The original Sanskrit words in this connection are as follows:

So by chanting this mantra . . . just like in India, still there are many snake charmers. They, by chanting mantra, they cure snake-bitten cases, although they're fatal. Of course they are now dwindling, but there are still. So if it is possible materially, then spiritually there is great possibility. And it is recommended in the śāstras, and actually it has happened.

Prabhupāda: (explains to the translator) Delivered from the mental platform. I think this is the explanation. Now if there is question.

Translator: (translating questions) You said that there's 8,400,000 species of living entities. He would like to have an explanation of it.

And this civilized form of life is especially meant for self-realization. This is a chance given by the nature to understand yourself. But if we don't understand—miss this point—again we go into the cycle of different species of life.

Just we can imagine if we get next life like a tree, we have to stand up for ten thousands of years. So we should be very careful not to miss this opportunity of getting civilized form of life, and try to understand what I am. All the śāstras, Vedas, they are meant for human being, not for the cats and dogs. If you don't take advantage of this great knowledge, then you are following the suicidal policy.

Therefore according to Vedic civilization there are four divisions. The most intelligent class of men, they are called brahmins; and the next intelligent class of men are called the kṣatriyas; and next the vaiśyas; the next, śūdras; and all others, they are caṇḍālas. This is according to the knowledge, advancement of spiritual knowledge, this division.

Kṛṣṇa says that anyone can come to Kṛṣṇa consciousness and thus elevated to the highest perfection of life. So it is the duty of persons, especially that is ordered by Lord Caitanya Mahāprabhu that Indians, they should purify first their life and then distribute this knowledge, Kṛṣṇa consciousness, all over the world.

It is said that that is first-class religious principle which teaches devotion to the Supreme Lord without any motive and without being hampered by any material condition. God consciousness is not such a thing that if a man is materially poor he cannot advance. Everyone can advance. Nothing material can check God consciousness, and any religion which teaches this principle, that is first class.

Question: (translated) Do you think that the Kṛṣṇa consciousness movement has anything particular to say to the society today?

Prabhupāda: Yes. We are saying that—I began—that unless you come to the point of Kṛṣṇa consciousness, you cannot be happy. Kṛṣṇa . . . when I say "Kṛṣṇa" it means God, God consciousness. You may say in another name; that does not matter. When I speak of Kṛṣṇa, Kṛṣṇa means God, the Supreme Lord.

So unless we are conscious of the Supreme Lord . . . in other religions they say "God is great," but how God is great? What is the name of God, and what other things? Just like if we know somebody, we must know very particularly what is his name, where is his residence, what does he do—so many things. Simply an idea of God is great, that is good, but how great He is, that is a science. That we have to learn from Vedic literature.

(break) . . . malinterpretation. Then we can understand the science of God very clearly. So we are teaching our Kṛṣṇa consciousness movement on the basis of Bhagavad-gītā As It Is. (break)

Question: (translated) One thing we're doing . . . we should think of people are very confusing in the idea of reincarnation. So how can you say that human intelligence and . . . a human being and human intelligence can reincarnate in a vegetable form or an animal form?

At the time of death, the subtle mentality which you develop, it is just like the air carries the flavor; similarly, that mental idea is being carried by the subtle mind, intelligence, and you are given chance of a particular body by which you can enjoy that mental position.

Question: (translated) What is the ideal of the . . . ideal result of the transmigration of the spirit soul?

Prabhupāda: The idea is to save yourself. Suppose I am now very happy Frenchman, but if next life I get another life, degraded life, then what is my position? Therefore one should understand, one should prepare his next body in this life. Just like a student studies very carefully to prepare his next life, similarly, this human form of life should be prepared to get next life.

Question: (translated) Therefore there exist a class of superior beings, spiritual, who are existing.

Question: (translated) He's saying maybe this is what the Christians call angels.

Prabhupāda: Yes. As soon as you become God conscious, that is the position of angel. This is confirmed in the Bhagavad-gītā—the exact verse is like this:

This brahma-bhūyāya means angels. They are not in this material world; they are transcendentally situated. Brahma-bhūyāya kalpate—anyone who is engaged in Kṛṣṇa consciousness, in devotional service:

So those who are not criminal, they are not controlled by the criminal department. So therefore, although the material nature, the laws are very stringent, still those who are Kṛṣṇa conscious, for them there is no such thing as law.

"Those who are surrendered to Me, they have already transcended the position of being controlled by material nature."

Question: (translated) Can you explain why this Kṛṣṇa consciousness has so much success among young people . . . (indistinct) . . .?

Prabhupāda: Not only young people. Old men are reluctant, and they are easily taken. If old men take, they will be also successful. It is not restricted to the younger generation—to everyone. But the younger generation, they are receptive, they are blank slate. The old men, they have got so many hodgepodge in their mind, therefore they cannot take easily. That is the difficulty. They have to forget all hodgepodge things, then they have to take. So the process of forgetting is there, but here they are new heart, and they see very nice thing, they accept it.

Prabhupāda: Well, they are searching because they are frustrated by seeing their parents' life, by their guardians' life. They are frustrated. So that is a good sign. One who is frustrated, he can take to Kṛṣṇa consciousness very quickly. I was just coming from Moscow. There are many young Russians, they are also very much prepared to take to this Kṛṣṇa consciousness. But there is so many restriction. We cannot preach very freely; that is our position.

So this Kṛṣṇa consciousness movement is now experimented that this movement can be accepted by anyone, any part of the world, and whoever takes it, he will be happy. That's all.

Prabhupāda: His idea is to surrender unto Kṛṣṇa. Punaḥ punaḥ means "again and again," and that we are preaching. And Kṛṣṇa also is speaking the same thing. Kṛṣṇa says: "Surrender unto Me."

Just like if somebody says . . . suppose I say: "Give me a glass of water." And if my disciple says, "Give a glass of water to Prabhupāda," the order is the same. But if somebody says that this Prabhupāda's words, "Give me a glass . . ." "me" can be changed to "milk," that is bogus. That is going on. It should be . . . Kṛṣṇa consciousness movement should be strictly on the principles of Kṛṣṇa's desire.

That was executed by Arjuna. He changed his own principle for the satisfaction of Kṛṣṇa. He did not want to fight; therefore Bhagavad-gītā was explained to him, and later on, when Kṛṣṇa enquired, "What you have decided?" he said, kariṣye vacanaṁ tava (BG 18.73): "Yes, I shall now fight." This is Kṛṣṇa consciousness. One has to change his concocted ideas and surrender to Kṛṣṇa. That will benefit; otherwise not.

Question: (translated) Are there other names than Kṛṣṇa?

Prabhupāda: Yes, there are many thousands and millions of names, but "Kṛṣṇa" is the chief name. (break)

Question: (translated) He'd like to know if there is actually a living representative of Kṛṣṇa here. And how do you become . . .

Translator: (asks Prabhupāda to explain what he said)

Question: (translated) Can you arrive at Kṛṣṇa consciousness without having any love for humanity?

Prabhupāda: It is the only process how to love humanity. It is the only process. When Rupa Goswami met Lord Caitanya Mahāprabhu, he designated Him namo mahā-vadānyāya (CC Madhya 19.53): "The greatest benefactor," kṛṣṇa-prema-pradāya te, "by Your distributing Kṛṣṇa consciousness." So to distribute Kṛṣṇa consciousness is the greatest welfare activity in the whole human society.

Question: (translated) Do you consider celibacy as superior to being married in our spiritual order?

Prabhupāda: Yes. Celibacy, that is the Vedic system. First of all students are taught not to live by theoretical—by practical. The students were living in gurukula to learn brahmacarya, celibacy, and if the master saw that he is complete in celibacy, he would not allow him to marry. But if he sees that he has got tendency to enjoy this material life, he says that "You go home and get married."

The idea was to avoid sex life. But if one cannot, then next automatically he is married. Not illicit sex life. That is most sinful life. Unrestricted sex life is visible just like the hogs, they have got unrestricted sex life; the monkeys. But that is not human life. Human life, even there is necessity of sex life, that should be regulated and restrained. That is human life.

Question: (translated) Do you think marriage is necessary?

Prabhupāda: Not necessary, but one who cannot avoid sex life, for him it is necessary.

Question: (translated) He's saying that do you mean you can have children and not be married?

Question: (translated) Does that mean you can have children but not be married?

Prabhupāda: Yes. We do our own duty, chanting Hare Kṛṣṇa mantra. Those who are kindly attracted we welcome; otherwise we go on doing our duty.

Question: What is the difference between our teaching and the teachings of Maharishi?

Prabhupāda: I do not know about Maharishi. We know about our own business. That's all.

That's all right. Thank you very much. (cut) (end)