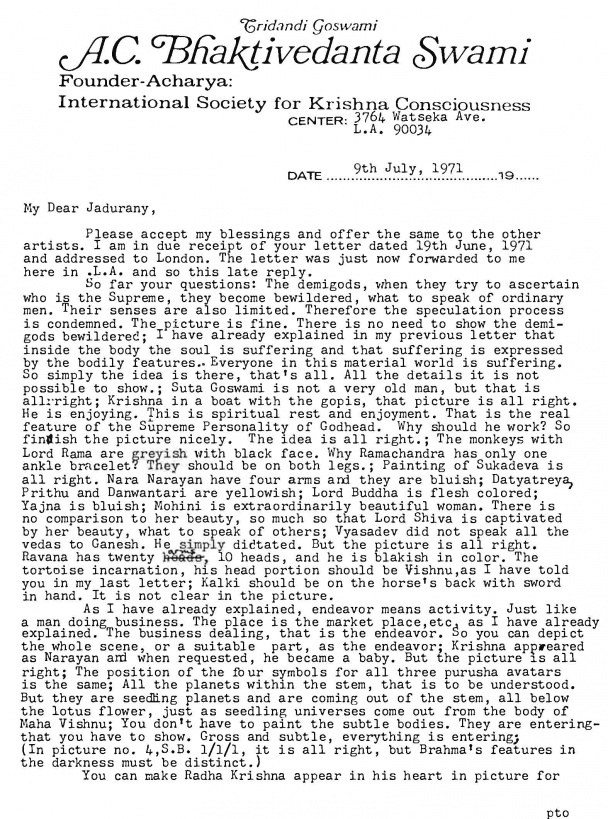 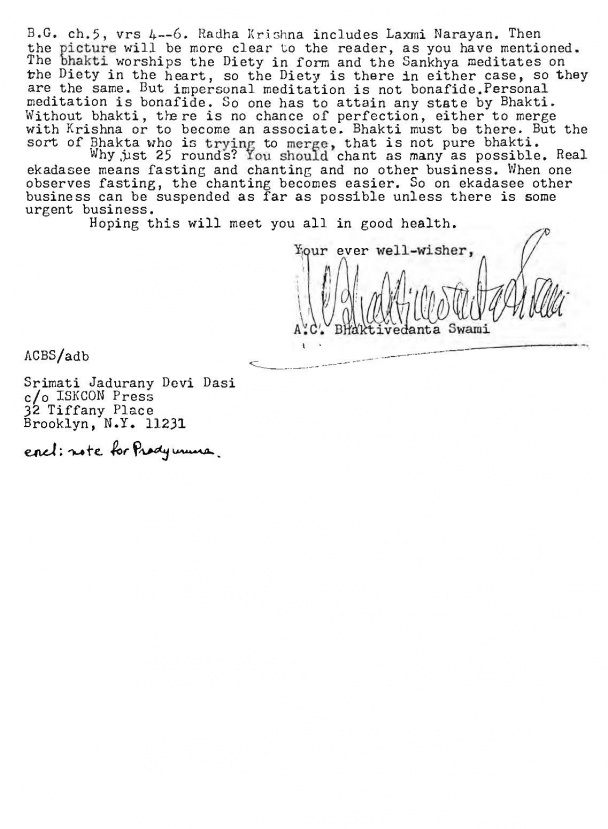 Please accept my blessings and offer the same to the other artists. I am in due receipt of your letter dated 19th June, 1971 and addressed to London. The letter was just now forwarded to me here in L.A. and so this late reply.

So far your questions: The demigods, when they try to ascertain who is the Supreme, they become bewildered, what to speak of ordinary men. Their senses are also limited. Therefore the speculation process is condemned. The picture is fine. There is no need to show the demigods bewildered; I have already explained in my previous letter that inside the body the soul is suffering and that suffering is expressed by the bodily features. Everyone in this material world is suffering. So simply the idea is there, that's all. All the details it is not possible to show. Suta Goswami is not a very old man, but that is all right. Krishna in a boat with the gopis, that picture is all right. He is enjoying. This is spiritual rest and enjoyment. That is the real feature of the Supreme Personality of Godhead. Why should he work? So finish the picture nicely. The idea is all right. The monkeys with Lord Rama are greyish with black face. Why Ramacandra has only one ankle bracelet? They should be on both legs. Painting of Sukadeva is all right. Nara Narayan has four arms and they are bluish; Datyatreya, Prthu and Dhanvantari are yellowish; Lord Buddha is flesh colored; Yajna is bluish; Mohini is extraordinarily beautiful woman. There is no comparison to her beauty, so much so that Lord Siva is captivated by her beauty, what to speak of others. Vyasadev did not speak all the Vedas to Ganesh. He simply dictated. But the picture is all right. Ravana has twenty arms, 10 heads, and he is blackish in color. The tortoise incarnation, his head portion should be Vishnu, as I have told you in my last letter. Kalki should be on the horse's back with sword in hand. It is not clear in the picture.

As I have already explained, endeavor means activity. Just like a man doing business. The place is the market place, etc., as I have already explained. The business dealing, that is the endeavor. So you can depict the whole scene or a suitable part, as the endeavor; Krishna appeared as Narayan and when requested, he became a baby. But the picture is all right; The position of the four symbols for all three purusa avataras is the same; All the planets within the stem, that is to be understood. But they are seedling planets and are coming out of the stem, all below the lotus flower, just as seedling universes come out from the body of Maha Vishnu; You don't have to paint the subtle bodies. They are entering—that you have to show. Gross and subtle, everything is entering; (In picture no. 4, S.B. 1.1.1, it is all right, but Brahma's features in the darkness must be distinct.)

You can make Radha Krishna appear in this in picture for B.G. Ch. 5, vrs 4-6 Radha Krishna includes Laksmi Narayan. Then the picture will be more clear to the reader, as you have mentioned. The bhakta worships the Deity in form and the Sankhya meditates on the Deity in the heart, so the Deity is there in either case, so they are the same. But impersonal meditation is not bonafide. Personal meditation is bonafide. So one has to attain any state by Bhakti. Without bhakti, there is no chance of perfection, either to merge with Krishna or to become an associate. Bhakti must be there. But the sort of Bhakta who is trying to merge, that is not pure bhakti.

Why just 25 rounds? You should chant as many as possible. Real Ekadasi means fasting and chanting and no other business. When one observes fasting, the chanting becomes easier. So on Ekadasi other business can be suspended as far as possible unless there is some urgent business.

Hoping this will meet you all in good health.