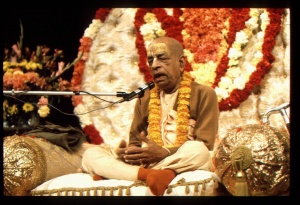 What is that? Bellevue? In your city?

There was a case in India, a murder case, and the murderer pleaded that he became mad—he was mad; therefore he . . . he did not know what did he do. So in order to test him, whether actually he, at that time, was lunatic or turned mad, the expert civil servant, psychiatrist, was brought to examine him. So the doctor gave his opinion that, "So far I have studied cases, all patients I've come in contact, they are more or less all crazy. So in that sense, if your lordship wants to excuse him, that is another thing."

So that is the fact. In a nice Bengali poetry, one great Vaiṣṇava poet has written:

The chemical composition of God's body and our body . . . not this body. This is material. I am speaking of our spiritual identification, that body. That is as good as God. The chemical composition is one. But similarly, as the rainwater falls down on the ground, similarly, as we come in contact with this material world . . . material world means it is being manipulated by the material energy of Kṛṣṇa, prakṛti, nature.

Nature means whose nature? As soon as we speak of nature, it must be inquired, "Whose nature?" God's nature. Nature is not acting independently. That is another foolishness. In the Bhagavad-gītā, it is clearly said that nature, this material nature, is not independent. Just like a foolish man, when he sees that machine is working automatically—machine is not working automatically, there is a driver. A foolish man cannot see behind the machine a driver. That is our defect in vision.

A machine, there is electronics working very wonderfully. But behind that electronic work, there is a great scientist who is pushing the button. It is very simple to understand. Machine is matter. It cannot work out of its own accord. It is working under some spiritual direction. Just like this machine, the tape recorder, is working, but it is working under the direction of a living entity, a human being. The machine is all complete, but unless it is manipulated by a spirit soul, it cannot work.

Similarly, take it for granted that the whole cosmic manifestation is a great machine, nature. But behind this material nature, there is God, Kṛṣṇa. And Kṛṣṇa says in the Bhagavad-gītā:

So there is supreme control. The modern civilization, they do not understand it, due to lack of knowledge. So our Kṛṣṇa consciousness movement is trying to enlighten people to come to this point of knowledge. They're all crazy, conducted by the influence of the three modes of material nature. They're not in normal condition.

But because it is very difficult subject, they set aside. They are busy for technology for eating, sleeping, mating and defending, that's all. Animal technology. The animals also trying their best how to eat nice, how to have nice sex life, how to sleep and how to defend. So what is the difference between man's knowledge and animals' knowledge. The man's knowledge should be developed to find out this technology, what is the difference between a living man and a dead man, a living body and dead body. That is spiritual knowledge.

That is . . . that was taught by Kṛṣṇa in the beginning of Bhagavad-gītā. Arjuna was talking as a friend, replying Him as a friend. Of course, he was . . . whatever he was talking, that was right, but that was right to a certain point. Beyond that point, there are other subject matter of knowledge, which is called adhokṣaja, where our direct perception of material knowledge fails to approach. Just like we cannot see. There are so many microscope, powerful microscope. But find out within this body where is the soul. No, there is no microscope. But soul is there. Soul is there. Bhagavad-gītā informs:

So you cannot search out by your material . . . that . . . therefore all these universities, they are setting aside—very difficult subject. They are very much proud by creating a horseless carriage. That's all. Formerly horses were drawing carriages, now there is motorcar. So they are very much proud: "We have invented horseless carriage." Or wingless bird. There is wing, imitation wing of the aeroplane. But you invent that a soul-less body, then there is credit.

That cannot be. No machine can work without a soul. I was talking of this computer. What is called? Computer? Eh? Computer. But still, a trained man requires to handle the computer. Then what is the meaning of this computer? Whatever machine you make . . . similarly, we should understand that this great machine, which is known as cosmic manifestation, material nature—there is a supreme spirit which is manipulating. That is Kṛṣṇa. And Kṛṣṇa says. It is confirmed.

So our process of knowledge is very easy and perfect. The scientists, they are searching out what is the ultimate cause or ultimate control of this material nature, and they are putting, theorizing different proposition. But our means of knowledge, very easy and perfect, because we are hearing from the perfect person, Kṛṣṇa. And He says, mayādhyakṣeṇa (BG 9.10). So immediately we know that all this cosmic machine, which is working so nicely and wonderfully, behind this machine the driver is Kṛṣṇa. Exactly behind a machine here, there is a machine driver, similarly, behind this big machine of material nature, there is Kṛṣṇa.

So there are many so-called "Gods" nowadays. Very . . . God has become very cheap, especially they are imported from India.They are not manufactured in here. You are fortunate. But India, they're coming out, "God," practically every day. They are . . . the other day Karandhara was telling me that some God was coming to Los Angeles, and they were requested to receive him. So Kṛṣṇa is not that kind of God. I mentioned in my introduction to Kṛṣṇa Book that Kṛṣṇa is not that type of God, manufactured in mystic factory. No. He is God. He was not made God, but He is God.

So the point is that behind this material . . . big material nature, cosmic manifestation, there is God. That is Kṛṣṇa, and accepted by all authorities. We have to accept things which is accepted by authorities. That is our education. We go to teacher. We go to school. We learn from father, mother. They're all authorities. And our nature is to learn . . . "Father, what is this?" in childhood. Father says: "This is this, pen. This is spectacle. This is table." So he learns from father, mother, "This is table. This is spectacle. This is pen. This is this. She is my sister. She is my brother."

So similarly, if we get information from the authority, and if the authority is not a cheater, then our knowledge is perfect, and very easy. Just like father, mother never cheats. When the son inquires from the parents, the parent gives exact information, right information. Similarly, if we get right information from the right person, that is perfect knowledge. If you want to reach to the conclusion by speculation, that is imperfect—inductive process. That will never become perfect. It will remain imperfect for all the time.

So we get information from the perfect person, Kṛṣṇa. Therefore whatever we speak, that is perfect, because we don't speak anything which is not spoken by Kṛṣṇa or authorities who have accepted Kṛṣṇa. That is called disciplic succession. So our process is, process of acquiring knowledge, is very easy and perfect. That is Kṛṣṇa consciousness. We cannot say anything which is not accepted by the authorities coming from Kṛṣṇa. And in the Bhagavad-gītā Kṛṣṇa recommends this process of knowledge—evaṁ paramparā-prāptam imaṁ rājarṣayo viduḥ (BG 4.2): "This knowledge, formerly, all the great saintly kings . . ."

There were many instances, the Vedic civilization, how the kings were perfect. You'll find from Dhruva Mahārāja's instances that Dhruva Mahārāja went to the forest to search out God, and he found out. By severe type of penances and austerities, he found out God within six months. How? He was a five-years-old boy, child. According to the direction of his spiritual master, Nārada, he went alone in the forest, although a king's son, very delicate body.

So in the first month he simply used to eat some vegetables after three days, each three days. One, two, three—then he eats something, some fruits, some vegetables. Then next three months, each six days he used to little . . . drink little water. And next month, in each twelve days he used to inhale some air. In this way, for six months he stood in one leg and executed these austerities, and at the end of six months, God became manifest before him eye to eye. So if we follow austerities, then it will be possible to see God eye to eye and perfection of life.

So this Kṛṣṇa consciousness movement, there is austerity, but it is not very difficult. We recommend our students not to have illicit sex. We don't stop sex, but regulate. We don't stop eating, but regulated, kṛṣṇa-prasādam, no meat-eating. No . . . we don't say: "No eating," but "No meat-eating." So what is the difficulty? Now see. In our kṛṣṇa-prasādam, we have got so many varieties of fruits, vegetables, nicely cooked. What is the difficulty? "No illicit sex" means don't be cats and dogs. Be married man and have one wife, one husband, and be satisfied.

So unless we regulate, unless we undergo austerity . . . we cannot undergo such severe type of austerity as Dhruva Mahārāja went, that every three days a little fruit or vegetable, then every six days little water. That is not possible in these days. If you want to imitate Dhruva Mahārāja, it will be impossible. So we don't prescribe any impossible method, but possible method.

But these students, they can very easily say what is next life, what is God, what I am, what is our relationship. This knowledge you'll find perfectly, because they are reading perfect book of knowledge, Bhagavad-gītā, Śrīmad-Bhāgavatam. So this is our process, very easy. Anyone can adopt and make his life perfect. And if somebody says that "I am not educated. I cannot read book," still, there is possibility, you simply chant Hare Kṛṣṇa.

So you have got tongue. You have got ear. Kṛṣṇa has given you. And you'll be surprised to know that Kṛṣṇa is realized through tongue, not through eyes, not through ears. Tongue. Of course, after tongue, the other senses are following. Tongue is the chief. So we have to control the tongue. How to control? Chant Hare Kṛṣṇa and taste kṛṣṇa-prasādam. That's all.

Sevonmukhe hi jihvādau svayam eva sphuraty adhaḥ. Ataḥ śrī-kṛṣṇa-nāmādi na bhaved grāhyam indriyaiḥ (CC Madhya 17.136). You cannot understand Kṛṣṇa by exercising your sensual perception, speculation. It is not possible. Kṛṣṇa is so great that He is not within your sensual exercise. No. He can be understood by surrender. Kṛṣṇa therefore recommends this process, sarva-dharmān parityajya mām ekaṁ śaraṇaṁ vraja (BG 18.66). Because our disease is rebellious, no authority.

So the best authority is Kṛṣṇa. If we . . . after all, we have to accept authority. So why not best authority, Kṛṣṇa? Then your life becomes successful.

Nanda-kiśora: What happens to a person if we just give him out on the street one Simply Wonderful or some prasādam, one piece of prasādam?

Prabhupāda: Oh, that is wonderful, simply wonderful. (laughter) (chuckles) He has not tasted such wonderful sweet in his life. Therefore you give him wonderful, and because he's eating that wonderful sweet, one day he'll come to your temple and become wonderful.

Prabhupāda: That's all right. (chuckles) You can become, everyone. Hmm. All right, have kīrtana.