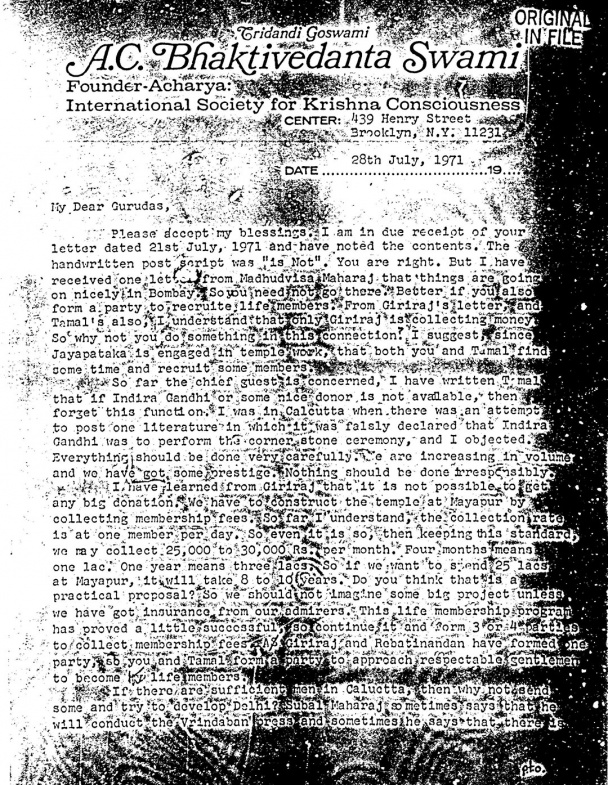 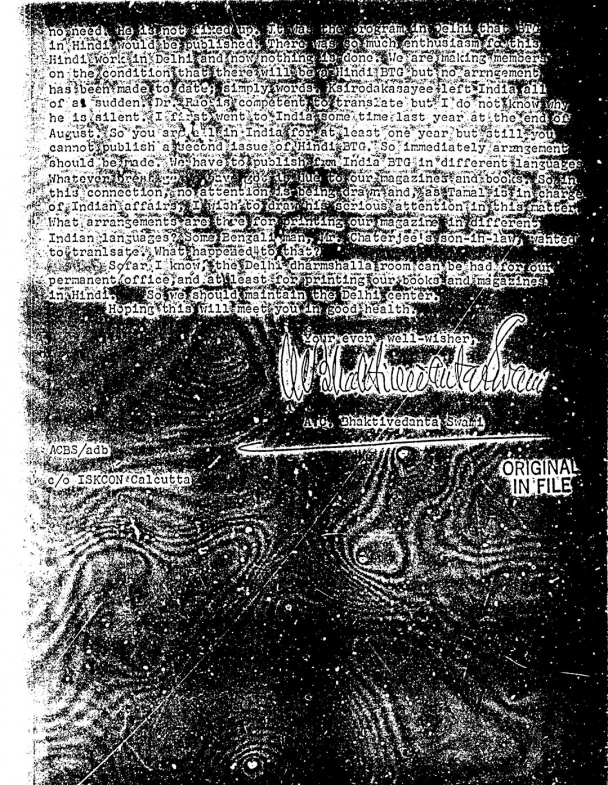 Please accept my blessings. I am in due receipt of your letter dated 21st July, 1971 and have noted the contents. The handwritten postscript was "is Not". You are right. But I have received one letter from Madhudvisa Maharaj that things are going on nicely in Bombay. So you need not go there. Better if you also form a party to recruite life members. From Giriraj's letter, and Tamal's also, I understand that only Giriraj is collecting money. So why not you do something in this connection? I suggest, since Jayapataka is engaged in temple work, that both you and Tamal find some time and recruit some members.

So far the chief guest is concerned, I have written Tamal that if Indira Gandhi or some nice donor is not available, then forget this function. I was in Calcutta when there was an attempt to post one literature in which it was falsely declared that Indira Gandhi was to perform the corner stone ceremony, and I objected. Everything should be done very carefully. We are increasing in volume and we have got some prestige. Nothing should be done irresponsibly.

I have learned from Giriraj that it is not possible to get any big donation. We have to construct the temple at Mayapur by collecting membership fees. So far I understand, the collection rate is at one member per day. So even it is so, then keeping this standard, we may collect 25,000 to 30,000 Rs. per month. Four months means one lakh. One year means three lakhs. So if we want to spend 25 lakhs at Mayapur, it will take 8 to 10 years. Do you think that is a practical proposal? So we should not imagine some big project unless we have got insurance from our admirers. This life membership program has proved a little successful, so continue it and form 3 or 4 parties to collect membership fees. As Giriraj and Revatinandana have formed one party, so you and Tamala form a party to approach respectable gentlemen to become life members.

If there are sufficient men in Calcutta, then why not send some and try to develop Delhi? Subal Maharaj sometimes says that he will conduct the Vrindaban press and sometimes he says that there is no need. He is not fixed up. It was the program in Delhi that BTG in Hindi would be published. There was so much enthusiasm for this Hindi work in Delhi and now nothing is done. We are making members on the condition that there will be a Hindi BTG but no arrangement has been made to date; simply words. Ksirodakasayi left India all of a sudden. Dr. Rao is competent to translate but I do not know why he is silent. I first went to India some time last year at the end of August. So you are all in India for at least one year but still you cannot publish a second issue of Hindi BTG. So immediately arrangement should be made. We have to publish from India BTG in different languages. Whatever prestige we have got is due to our magazines and books. So in this connection, no attention is being drawn and, as Tamal is in charge of Indian affairs, I wish to draw his serious attention in this matter. What arrangements are there for printing our magazine in different Indian languages? Some Bengali man, Mr. Chaterjee's son-in-law, wanted to translate. What happened to that?

So far I know, the Delhi dharmasala room can be had for our permanent office, and at least for printing our books and magazines in Hindi. So we should maintain the Delhi center.

Hoping this will meet you in good health.