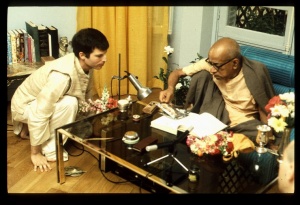 Devotee: (introducing recording) Discussion between His Divine Grace and Apa Pante, A-P-A-P-A-N-T-E, High Commissioner for United Kingdom, 4th August, 1971, noon. The recording is not very clear, from being copied from a cassette tape recorder. Please make it out as best as possible. Hare Kṛṣṇa.

Prabhupāda: . . . in India by nature they are Kṛṣṇa conscious, but by artificial means they have been . . . (Apa Pante laughs) . . . trained to forget Kṛṣṇa. Like that.

Prabhupāda: I think you understand some Bengali. There is a verse in Caitanya-caritamṛta,

Prabhupāda: It is not an artificial imposition. So everyone is Kṛṣṇa conscious.

Prabhupāda: That is another thing. But the process recommended in this age by Caitanya Mahāprabhu:

So harer nāma—Hare means the Supreme Personality of Godhead, Kṛṣṇa—that simply chanting harer nāma one can be entirely Kṛṣṇa conscious. And actually it is happening. These European and American boys and girls, especially the young men, four years ago they did not know what is Kṛṣṇa, but now they are so serious . . .

Prabhupāda: . . . about Kṛṣṇa consciousness. We have got many Muhammadans, Parsis, yogīs, everywhere . . . (indistinct) . . . but nitya siddha kṛṣṇa. Nitya siddha. That means eternally.

Prabhupāda: (indistinct) . . . so far my belief is that . . . why my belief? It is the belief of the authority, Lord Caitanya. He said that this movement will spread, and people will be happy. So it is a great movement. Every thoughtful man, scientist, philosopher and follower should try to understand. It is authorized, based on Bhagavad-gītā, Śrīmad-Bhāgavatam: śrīmad-bhāgavataṁ amalaṁ purāṇam (SB 12.13.18).

So I have already established fifty branches. Now in Calcutta, Bombay also we have got. Now recently we have got a big program to start an institution, kṛṣṇa-bhakti, on the first five forms Lord Caitanya. So I have already purchased land, but we have to purchase more land. Now . . .

Apa Pante: Is it in Bengal?

Prabhupāda: It is in Bengal. So my only . . . (indistinct) . . . is that Śrīmatī Indira Gandhi, I was hoping if she can authorize something. We don't want any monetary help from anyone; simply by supporting. So kindly help me, for that purpose.

Apa Pante: (laughs) How right you are.

Prabhupāda: I don’t want anything. Another thing, I see you have got my first book, Kṛṣṇa.

Apa Pante: Yes. Is this the second part?

Prabhupāda: No, all our literature is coming out very successful.

Apa Pante: This is all your literature?

Prabhupāda: (indistinct) . . . you order and bless the program . . . we are blessed if you order the program. Back to Godhead.

Apa Pante: (laughs) It would be much better to have the God order.

Prabhupāda: If you hold up Back to Godhead . . . people are trying to forget God. Without God. Kingdom of God without God.

Prabhupāda: So I want to have in India a nice center so that foreign students will go. That . . . what you call it? They were regular students, college for students from America who travel . . . (indistinct) . . . so I want to keep at least one hundred students here. For that purpose also we want some facilities. Because as soon as foreigners go, especially these boys . . . I am very much anxious to help them . . . (indistinct) . . . I do not know why.

Apa Pante: When will you go to India?

Prabhupāda: After I've been to festival. I want the festival, then go.

Prabhupāda: No, that will not be . . . if you kindly say yes to this proposal, then I shall arrange.

Prabhupāda: I don't ask you officially to execute it; I simply request you that you also request on behalf of Kṛṣṇa consciousness movement. She knows us. She knows us. But if you request her, then she'll . . . she knows about our activities. Some of our boys in Delhi met her when she . . . (indistinct) . . . and she promised also that when I go to Bengal . . . now I want to fix up, and then I go and arrange . . . (indistinct)

Apa Pante: I would like to. I don't know when I may get an answer, but after I get the answer I will let you know. Are you happy?

Prabhupāda: Then I shall wait here.

Apa Pante: It is in the hands of God. I will do the writing, but the end result is not in my hands.

Devotee: (indistinct) . . . went from here, and they got a visa for three months and then they extended it six months. So after six months the visa was expired, then I approached the Home Minister at the time, and he said: "Well you must go back." So on a special condition they are extending the stay, and we requested that the people who have come from America, from France, from Europe, they applied the missionary visa from there end and they get it from there. Not that you can extend the missionary visa. We wanted a missionary visa granted from here.

There must be some advice in the scripture to follow these principles. Caitanya Mahāprabhu says, śrīmad-bhāgavataṁ amalaṁ purāṇam. Amalaṁ means without any material contamination. And similarly, devotional service mixed with material purpose, or jñāna . . . Jñāna means to merge into the existence of the . . . (indistinct) . . . Jñāna, that is the target of jñāna. And karma, karma means to take benediction from God . . . (indistinct) . . . everyone is trying to be very, very big man, in general, in this material world. That is karma.

Real bhakti . . . anyābhilāṣitā-śūnyaṁ jñāna-karmi vibhājitam ānukūlyena kṛṣṇānu-śīlanam (Brs 1.1.11). Simply serve Kṛṣṇa favorably . . . (indistinct) . . . just like Arjuna did. This is the . . . (indistinct) . . . nephews, grandfather. He did not like, but when he saw that Kṛṣṇa wants it, then ānukūla, favorably. If Kṛṣṇa wants it, then he wants it. Ānukūlyena kṛṣṇānu-śīlanam.

(indistinct) . . . if you simply concentrate on Kṛṣṇa . . . of course, in our Hindu system there are so many other things recommended, but in the Bhagavad-gītā, sarva-dharmān parityajya mām ekaṁ: a clear fact, that Kṛṣṇa is the Supreme . . . (indistinct) . . . in the Bhāgavatam it is said by Devahūti, who instructs Kapiladeva, bhāgavata bāṇam. Bhāgavata bāṇam. Bāṇam means arrow, the arrow which has got established. So if this process is controlled by Kṛṣṇa, kṛṣṇas tu bhagavān . . . bhagavān svayam (SB 1.3.28) . . .

Other methods, they may lead to the Absolute, but with vague ideas. Absolute means ānukūl, in three phases: Brahma, Paramātmā and Bhagavān. Brahmeti paramātmeti bhagavān iti śabdyate (SB 1.2.11): the Absolute Truth is understood in three ways. You can see that the jñānīs, Parabrahma. Not Parabrahman, Brahma, Brahma effulgence. But for the yogīs, Paramātmā, antardhyāna, and the bhaktas, the Supreme Personality of Godhead.

So this movement is ānukūlyena kṛṣṇānu-śīlanam. Bhakti-yoga, first class. And similarly in the Nārada-pañcarātra it says:

Prabhupāda: Actually, our senses, they are not our senses . . . (indistinct) . . . so these hands and legs are belonging to Kṛṣṇa. . . . (indistinct) . . . so when these senses are engaged in the service of the proprietor of the senses, that is called bhakti. You cannot engage . . . just like your senses are part and parcel of the human body if they are engaged in the service of the body. You cannot apply your senses for any other . . . that makes you real, a part and parcel.

Prabhupāda: At the present moment, in the materialistic way of life, people are conscious to use their senses for a particular designation, "I am American," "I am Hindu," "I am Muslim." So here he has accepted a particular type of designation. He is neither Hindu, nor Muslim, nor Indian, nor American. He is brahmacārī, real brahmacārī: ahaṁ brahmāsmi. Brahma—part and parcel of the Parabrahma. Mamaivāṁśo jīva-loke (BG 15.7). That realization is required. Unless that realization is there, then, I mean, then your human life is . . . (indistinct) . . . Athāto brahma jijñāsā (Vedānta-sūtra 1.1.1): one should be inquisitive to know what is the science of Brahma. That is the real function of human life. So, so long we are not engaged in our real function, then it is śrama eva hi kevalam.

Everyone has got some particular duty. He may perform very nicely his particular designated duty, but if he does not have any Kṛṣṇa consciousness, then śrama eva hi kevalam. So people should, in the midst of his variegated duties . . . in another place it is said:

Not ordinary man. Because he is the king, he is the right person. If you understand this nicely . . . (indistinct) . . . this is how we follow.