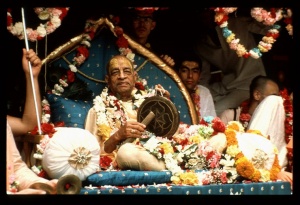 Translation: "Śrīla Sūta Gosvāmī said: Let me offer my respectful obeisances unto that great sage Śukadeva Gosvāmī, who can enter the hearts of all. When he went away to take up the renounced order of life (sannyāsa), leaving home without undergoing the sacred thread ceremony, his father, Vyāsadeva, cried out to him, 'O my son!' Indeed, only the trees echoed in response to the begrieved father."

Prabhupāda: Hmm. So the question raised by the sages and saintly person in Naimiṣāraṇya as, "After departure of Kṛṣṇa, unto whom the charge of religious principle depended?" So Sūta Gosvāmī, who is a disciple of Śukadeva Gosvāmī . . . Śukadeva Gosvāmī is his spiritual master. Therefore it is the etiquette, before speaking anything, the disciple should first of all offer respect to the spiritual master.

What is the activities of your spiritual master? He's simply preaching the message of Lord Caitanya. That is his business. What is the message of Lord Caitanya? Lord Caitanya's message is that you go and speak everyone about Kṛṣṇa and Kṛṣṇa's message. This is called paramparā system. Caitanya Mahāprabhu, as disciple of Īśvara Purī, He is preaching Kṛṣṇa consciousness. And similarly, in the disciplic succession of Lord Caitanya Mahāprabhu, the Gosvāmīs, ṣaḍ-gosvāmī: Śrī Rūpa, Sanātana, Bhaṭṭa Raghunātha, Śrī Jīva, Gopāla-bhaṭṭa, Dāsa Raghunātha. Vande rūpa-sanātanau raghu-yugau śrī-jīva-gopālakau.

Then we go to Caitanya Mahāprabhu's status: sa-advaitaṁ sāvadhūtam. That is also . . . first of all, Advaita Gosāñi, then Nityānanda Mahāprabhu, Prabhu. Mahāprabhu is applicable only to Śrī Caitanya Mahāprabhu. Others, all prabhus. Ekale īśvara kṛṣṇa āra saba bhṛtya (CC Adi 5.142). Kṛṣṇa, and He has got innumerable servant. Kṛṣṇa is Mahāprabhu, and all others, they are prabhus. And the spiritual master who has got many prabhus to abide by his order, he is addressed as Prabhupāda. This is the system.

So sādvaitaṁ sāvadhūtaṁ parijana-sahitaṁ kṛṣṇa-caitanya-devam. After offering all these obeisances to Gosvāmīs, to guru and Advaita, Nityānanda, then you come to Śrī Caitanya Mahāprabhu. Then Śrī Rādhā. Not Kṛṣṇa directly. Śrī-rādhā-kṛṣṇa-pādān saha-gaṇa-lalitā-śrī-viśākhānvitāṁś ca. Rādhā-Kṛṣṇa means They are always associated by the gopīs, of whom Lalitā-Viśākhā are the chief out of the aṣṭa-sakhīs. So this is the paramparā system.

So here also, we see, mahājano yena gataḥ sa panthāḥ (CC Madhya 17.186). We have to accept the path of the authorities. Here is authority, Sūta Gosvāmī. He is offering his respect to his spiritual master, Śukadeva Gosvāmī. As soon as you offer . . . just like we sung this Gurvaṣṭaka. Gurvaṣṭaka, vande guroḥ śrī-caraṇāravindam. Vande guroḥ śrī-caraṇāravindam. You can say simply, "I offer my respectful obeisances to my spiritual master." No. You must describe his activities. What is the activity of spiritual master?

This is describing the quality. Otherwise, everyone will become spiritual master. That quality, the activity, will support the bona fide spiritual master. Guṇa-karma-vibhāgaśaḥ (BG 4.13). There must be quality and action. So the spiritual master's action is that he is to deliver his disciple from the blazing fire of this material existence. Saṁsāra-dāvānala.

The comparison is therefore with the forest fire. Forest fire takes place without anyone's attempt. Simply by collision of two dry wood, there is friction, electricity is produced, and the dry leaf immediately catch hold of the electricity and it becomes fire. So this material world, everyone is trying to be peaceful, happy, tranquil. No. There must be fire. Exactly like that. The fire brigade is always ready, because they know that at any moment there will be fire.

So as it is statewise fire brigade is ready, similarly, universally this material world is also, there is chance of fire at any moment. We do not want it, but it will take place. Therefore this material existence is called saṁsāra-dāvānala-līḍha-loka. And the forest fire is compared, especially mentioned, this fire cannot be extinguished by your fire brigade. You cannot send fire brigade to the forest. I've seen in Nainital. From Kathgodam station, about, oh, one mile up in the hill there is fire. So, long ago. So I asked the man, "What is that?" "That is fire."

That means this is the indication that this fire of this material world can be extinguished through the exigency of spiritual master, because he has received the mercy, cloud. Cloud. Just like cloud has taken water from the sea, similarly, the spiritual master takes mercy, receives mercy, from the ocean of mercy, Kṛṣṇa, and he pours it over this saṁsāra-dāvānala.

This example is very nice, that you cannot extinguish by your plans the blazing fire of this material existence. That is not possible. This is foolishness. Andhā yathāndhair upanīyamānāḥ (SB 7.5.31). The so-called rascal leaders, they are making plan, lifelong. The United Nation making plan to stop war, fighting. They cannot do it. It is not possible. You have to take mercy from Kṛṣṇa. Then it is possible to extinguish. We have to seek mercy.

But the demons, they don't care for Kṛṣṇa, or God. They think that, "We shall do. I am God. I shall do it." Na māṁ duṣkṛtino mūḍhāḥ prapadyante narādhamāḥ. Because they are narādhama, lowest of the mankind. Why it is called? Kṛṣṇa says. We are not manufacturing this word. Kṛṣṇa says, "lowest of the mankind." Āsuri bhāvam āśritāḥ.

Those who are demons, those who have developed this asuric bhāva . . . asuric bhāva means denying the existence of God. That is asuric bhāva. There are two kinds of men: asura and devatā. Those who are accepting the authority of the Supreme Lord, they are called devatā. And those who are denying the existence of God . . . now such demons are prevalent everywhere, especially the Communist. And others, they write, of course, on the note, "We Trust In God," but practically does not do anything. That is also another edition of demons: under the garb of believing in God, doing all nonsense. You see?

So na māṁ duṣkṛtino mūḍhāḥ prapadyante narādhamāḥ. Human life is meant for understanding what is God, what is my relationship with Him. And when he understands the relationship is there, "God is great, I am very small . . ." No. The rascal says: "No, I am God." And what . . . in which way you become God? God is great. Are you great? If I give you any slap, you immediately cry, and you're claiming God? You see? But these rascals are doing nicely, and fools are following, "Here is a God, incarnation of God." You see?

So God is not so cheap. God . . . our conception of God . . . just like Kṛṣṇa. Kṛṣṇa is so powerful. It is stated in the Vedic literature, yasyaika-niśvasita-kālam athāvalambya jīvanti loma-vilajā jagad-aṇḍa-nāthāḥ (Bs. 5.48). Simply by the breathing of Mahā-Viṣṇu, innumerable . . .

Just like Prahlāda Mahārāja: he learned all about God consciousness from the . . . within the womb of his mother. Nārada Muni was teaching Prahlāda Mahārāja's mother. Because she was pregnant and she was being taken away by Indra and others, Nārada Muni rescued her, and because her husband was defeated and he fled away . . . he underwent severe austerities, "How to defeat these demigods?" So Nārada Muni took compassion upon this lady, and he told, "My dear daughter, you come with me. You live with my . . . in my hermitage until your husband comes back."

He has admitted. When his friends inquired from him, "My dear Prahlāda, you are the son of a king, and you do not go outside your palace, and we are sent here in this school, teaching. Our teacher is the same. How you have learned all these nice things?" Then he said: "My dear friends, these nice things I learned from Nārada, the same spiritual master. You require spiritual master." He then described that, "The instruction was actually meant for my mother, but being woman, she has forgotten." (laughter) This is the qualification of . . . don't be sorry. (laughter)

But Kṛṣṇa says . . . Kṛṣṇa says, striyaḥ śūdrās tathā vaiśyās te 'pi yānti parāṁ gatim. By Kṛṣṇa's mercy, even if (s)he's woman, striya . . . woman is considered to be less intelligent, but Kṛṣṇa is so merciful that:

"It doesn't matter whether he is woman or śūdra or a vaiśya. If he takes shelter of My lotus feet, according to the regulative principle, te 'pi yānti parāṁ gatim, they also go back to home, back to Godhead."

Kiṁ punar brāhmaṇāḥ puṇyā bhaktā rājarṣayas tathā (BG 9.33). Then what to speak of the persons who are born in brahmin family and those who are devotee? They must go, provided he takes shelter of Kṛṣṇa. Even striyaḥ śūdrās tathā vaiśyāḥ, who are considered less intelligent or born in lower degrade species of life, still, they can go. And what to speak of the persons who have taken in high family, devoted family? They must go.

Anityam asukhaṁ lokam imaṁ prāpya bhajasva mām (BG 9.33). This world is anityam. Anityam means temporary; asukham, and full of miseries. Imaṁ prāpya . . . if you want to get relief from this temporary world and the distresses within this world, then bhajasva mām: "Just become a devotee of Me."

(aside) What is the time?

So the activities of Śukadeva Gosvāmī that he purposefully remained within the womb of his mother for sixteen years, and as soon as he got out, immediately he left home. Immediately. Anupeta. Anupeta. Because according to Vedic system there is upanayana, upeta. Upanayana. Upa means near, and nayana means bringing. When the spiritual master brings the disciples nearer by giving him gāyatrī-mantra, that is called upanayana-saṁskāra.

So taṁ sarva-bhūta-hṛdayaṁ munim ānato 'smi (SB 1.2.2): "I am offering my respectful obeisances unto the great sage, Śukadeva Gosvāmī, whose activities is like that. Immediately coming out of the womb of his mother he left home without being . . . undergoing any saṁskāra." So saṁskāra is required who is impure. So we should not imitate, neither it is in our capability that as soon as we get out of the womb of mother we can walk.

No. That is not possible. It is special. It is special. Therefore everything is special. Even without taking any initiation . . . he was initiated by his father, Vyāsadeva, but he left immediately home, and Sūta Gosvāmī is describing the wonderful activities of his spiritual master and offering obeisance. Taṁ munim ānato 'smi: "That great sage," ānato 'smi, "I humbly bow down on his lotus feet."