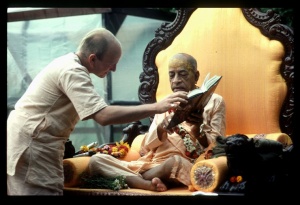 Prabhupada: . . . sung by Narottama dāsa Ṭhākura, a great ācārya of the Gauḍīya-sampradāya. You know in the Bhagavad-gītā, Kṛṣṇa says:

First of all, long, long ago Kṛṣṇa says: "I spoke this yoga system to the sun-god, millions of years ago." If you take . . . calculate the age of Manu, it comes forty millions of years. If you believe Bhagavad-gītā, as Kṛṣṇa says, that "First of all I spoke to Vivasvān . . ." Vivasvān is the name of the sun-god who is now predominating there. In every planet there is a predominating deity, just like in this planet we have got president.

So Kṛṣṇa says, sa kāleneha yogo naṣṭaḥ parantapa (BG 4.2). In due course of time that yoga system is now lost. Why? The paramparā system is lost. Learning the system, the Bhagavad-gītā yoga system, from the master to the disciple, when Kṛṣṇa was present personally, it was lost. He says, yogo naṣṭaḥ parantapa. Therefore Kṛṣṇa says: "The same yoga system, Arjuna, I shall inform you." Why? "I am not a Vedāntist." Kṛṣṇa was speaking to Arjuna. Arjuna was not a Vedāntist; he was a military man. A military man is not expected to become a Vedāntist. He knows his military art. Why Kṛṣṇa decided to preach Bhagavad-gītā to Arjuna?

In spite of Bhagavad-gītā being popular in the Western countries, in spite of our so many svāmīs from India went to preach Indian culture or the Hindu culture, before this movement of Kṛṣṇa consciousness, not a single person became a devotee of Kṛṣṇa. That is a fact. It was simply armchair discussion of Bhagavad-gītā.

But why at the present moment these youngsters, Europeans and Americans, Australians, Canadians, Japanese, why they are taking to Kṛṣṇa consciousness? Because this Bhagavad-gītā is presented as it is, without any adulteration. That is my point. Bhagavad-gītā is not meant for anyone else except the devotee. Bhagavān Śrī Kṛṣṇa could explain this Bhagavad-gītā to the jñānīs, to the yogīs, to the karmīs. But why he selected Kṛṣṇa . . . why He selected Arjuna? This is the secret of Bhagavad-gītā: bhakto si, priyo si. And the whole Bhagavad-gītā is taught to make everyone devotee of Kṛṣṇa.

Now on account of the microphone being disturbed we could not speak from the very beginning. Tomorrow I shall speak, if the microphone is all right. Today I have given you some introduction about this Kṛṣṇa consciousness. My students have already spoken.

So there is a nice song of Narottama dāsa Ṭhākura. He says, hari hari! bifale janama goṅāinu: "My Lord Kṛṣṇa, I have simply wasted my time and life." Bifale janama goṅāinu. Bifale means uselessly, "I have simply passed my life uselessly." Why? Manuṣya-janama pāiyā, rādhā-kṛṣṇa nā bhajiyā. I got this human form of life, but I did not take care to worship Rādhā and Kṛṣṇa.

Hari! Hari! bifale janama goṅāinu, "My dear Lord Kṛṣṇa, I have uselessly wasted my time." Manuṣya-janama pāiyā, rādhā-kṛṣṇa nā bhajiyā jāniyā śuniyā biṣa khāinu. "I have drunken poison knowingly." He regrets. Everyone should regret who is not becoming devotee of Rādhā and Kṛṣṇa. Everyone should regret like Narottama dāsa Ṭhākura is showing us the way.

Pāpī tāpī jata chilo, hari-nāme uddhārilo: "These two brothers, Lord Caitanya and Lord Nityānanda, is delivering all kinds of sinful persons," pāpī tāpī jata chilo. Jata chilo means forcing. Harinama is that. Simply by chanting this Hare Kṛṣṇa mantra, everyone is being delivered. It was done during the time of Lord Caitanya, and it is also being done at the present moment.

Tāra śākṣī jagāi and mādhāi. There are two brothers, Jagāi and Mādhāi. They were born in brahmin family, but due to bad association they became drunkards, woman hunters, murderers . . . (indistinct) . . . so they became great devotees. So there were two Jagāis and Mādhāis during Caitanya Mahaprabhu's time, but at the present moment there is unlimited numbers of Jagāis and Mādhāis, and they can be delivered simply by chanting this Hare Kṛṣṇa mantra. This is a fact.

Therefore Narottama dāsa Ṭhākura prays, hā hā prabhu nanda-suta, vṛṣabhānu-sutā-juta: "Here is Lord Kṛṣṇa, Nanda-suta, and His consort, eternal consort, Śrīmatī Rādhārāṇī." Rādhārāṇī is the daughter of Vṛṣabhānu, King Vṛṣabhānu. Therefore, Kṛṣṇa and Rādhārāṇī, They like very much to have Their eternal means of . . . (indistinct) . . . therefore Narottama dāsa Ṭhākura is not asking Kṛṣṇa but asking Nanda-suta, the son of Nanda.

Kṛṣṇa likes to be the son of His devotee. Kṛṣṇa as the Supreme Personality of Godhead has no father. He is the original father. Bījo 'haṁ sarva-bhūtānām.

So, today's time is almost finished. I request you all Indians in this foreign country, Nairobi, to take part in this Kṛṣṇa consciousness movement very seriously. It is India's gift to the whole world. If India is actually serious to become glorious, they cannot become glorious by imitating technology of the Western world. They remain behind hundred years for this technological development. Learn this technology of Kṛṣṇa consciousness and distribute throughout the whole world. They are in need of it. So Caitanya Mahāprabhu says:

So my request to you, those Indians here in Nairobi, please try to understand this Kṛṣṇa consciousness movement seriously and take it, and you have got immense opportunity to spread among the Africans. Just like our student Śrīmān Brahmānanda was speaking. He went to preach on the street this Kṛṣṇa consciousness movement, and many hundreds of these Africans joined, and they chanted.

So, ceto-darpana-marjanam: if you want to live with the Africans very nicely, friendly, try to introduce this Kṛṣṇa consciousness movement amongst them. They will be happy and you will be happy.