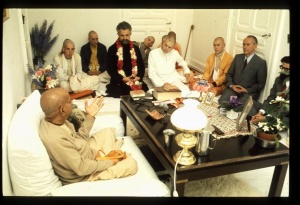 Prabhupāda: This kīrtana will go on nicely. So only you have got only mṛdaṅga? Why?

Tamāla Kṛṣṇa: I think more are coming from Calcutta.

Prabhupāda: Oh, that's nice. At least four khols you have to have. Four khols and sixteen men, that is party. Yes. And one leading singer and one dancer. That makes complete party. Twenty, twenty-two men. So where is Śyāmasundara?

Devotee: I didn't find him.

Devotee: I didn't find him anywhere.

Prabhupāda: He is not here?

Lady devotee: He just wanted to finish that . . . (indistinct) . . . He was trying to finish the Māyāpur thing.

Prabhupāda: Oh. Oh, that's all right.Then he may not come. So you can speak some discussion from our books? You can see, he is very great speaker, Viṣala prabhu.

Viṣala: I've been reading the Brahma-saṁhitā, and uh, by His Divine Grace Śrīla Bhaktisiddhānta Sarasvatī, and he mentions that to receive the mercy of . . . Kṛṣṇa's mercy, one has to be free of all mundane desires, and also he has to receive the grace of God at the same time. So it's all . . . it's like the son, he mentions . . .

He doesn't know how wealthy his father is, but by the grace of his father, he says, "My dear son, I have a lot of money and I . . . you will be in my will, and you will have this all, and I will give you all these instructions."

So similarly, by finally, gradually becoming free of all mundane desires and completely being influenced by the cit potency, by the superior cognitive energy of Lord Kṛṣṇa, one will receive the mercy of Rādhā and Kṛṣṇa. But the most important thing is to receive the mercy of the spiritual master, because only by the guru's mercy can one be blessed by God. So that means we have to . . . (break)

Tamāla Kṛṣṇa: Should I get a copy of that?

Prabhupāda: So here is a microphone. You did not know? Śrīmatī has brought two microphones.

Prabhupāda: Yes. Whenever somebody comes from there, something must be brought, because these things are not available. (break) . . . Indian, you cannot excel in mechanical knowledge than the Europeans, American. That is not possible. We will always remain hundred years back.

Everyone has got some special talent given by God. We should cooperate. That's it. Just like the hand can work in this way. We cannot walk with hands. That is the business of the hand. Similarly, I cannot cut the papers with leg.

So all living entities are endowed with special . . . we should cooperate. The hand and leg should cooperate for maintaining the whole body. Similarly, everyone should use his talent for satisfaction of Kṛṣṇa. That is perfection. Not compete with one another. That is mistake. No (laughs).

Śyāmasundara: (unwrapping package) It's not the microphone.

Śyāmasundara: I don't think it's the microphone. (break) So should we send these . . . (break)

Lady devotee: We can show that one copy of that letter, and what can they do to us?

Lady devotee: If they try to stop us from printing, we can show them the copy of that letter that says they do not publish, and then what can they do? We have a copy of . . .

Prabhupāda: I think we can publish all books here, because the agreement is made in USA. It has nothing to do within India. Indian law is different.

Śyāmasundara: I think it's a world copyright, or else we could publish in Japan also.

Śyāmasundara: I think this is a world copyright, or else we would be able to publish in Japan, in . . .

Prabhupāda: So Japan is out of world?

Śyāmasundara: It's out of US.

Śyāmasundara: It's out of the USA.

Śyāmasundara: I think their copyright . . .

Śyāmasundara: . . . is binding around the world.

Prabhupāda: If they want to publish, let them publish.

Prabhupāda: That I offered them that, "We are going to publish." So there was no reply.

Tamāla Kṛṣṇa: Should we go chant our rounds now?

Indian Guest : His sister had also come from Los Angeles, my elder brother had met you in Calcutta, he . . . (break) . . . if your grace permits (break)

Prabhupada: (indistinct Hindi) . . . but one thing is that, all right, he can go as my relative, because as visitor if he goes, then he cannot be admitted in school.

Prabhupāda: But if he goes as my unmarried grandson . . .

Prabhupāda: . . . then he can get. So that will be done. You pass this (indistinct) So your sons are very good sons. I have got all blessings for them. Now when will you become good, I don't know.

Lalaji: I am your only son . . . you have so many grandsons, but I am the one erratic son, bad son.

Prabhupāda: What is that problem?

Lalaji: These material problems like getting my daughters married, you know how Hindu Community how it works.

Prabhupāda: No, no . . . I never told you that you give up your family life, but in family life you just chant Hare Kṛṣṇa.

Lalaji: That I do little bit, Prabhupāda.

Prabhupāda: Not little bit, it has to be done full (laughs). Is he your father or are you his father.

Prabhupāda: What is your opinion (Hindi). There, there was a similar case in Lord Caitanya's time. The son became first a great devotee. So when the father came, then Caitanya Mahāprabhu, then . . . (indistinct) . . . Then father said: "No. He is my father." (laughs). So what subject matter are you studying. BMA?

Prabhupāda: that's nice. So their work is proposed to . . .

Lalaji: I think he should go there to study something, earn some money. That's all. If you say then I can also go.

Lalaji: If you say, if you permit then I can also go for helping Nandani with cooking of Prasad . . . (indistinct) . . . but whatever you feel right.

Lalaji: I love the land of Mother India a lot

Lalaji: I really love the land of Mother India.

Prabhupāda: You are Congress Party member that is why.

Lalaji: (laughs) I just work to maintain my living hence I work for Congress, this you already know.

Prabhupāda: How much the land has changed that also should be known, today or for the past ten, twenty or fifty years we are in this land but previous to that who knows we were in which land. This is all illusion. This jananī janma bhūmi, huh?

Lalaji: That is my contention.

Prabhupāda: Not, not as nationality.

Lalaji: Not as nationality. There are more . . .

Prabhupāda: But the land where Lord Kṛṣṇa came, Lord Rāma came, Lord Caitanya came, that land is certainly worshipable. That is another thing. In that way . . .

Lalaji: In that way I was saying that more essential that we talk more of spiritualism here. I don't know whether they talk it in other countries or not. But we do here more of it.

Prabhupāda: No, no. Other countries all they have got high respect for India as spiritual land. But we are killing, our present government and so-called leaders, killing that state. This is regrettable. They could hold this Bhārata-varṣa to the topmost summit all over the India if after Independence they would have organizedly preached Bhagavad-gītā and the Vedic culture. That is my mission. Now, whatever you may think of Bhārata-varṣa, outside, India is known as a poor . . . poorest country, because our ministers go there to beg.

Prabhupāda: Yes. They asked me; I said.

Lalaji: That's what we want to hear now, you know.

Prabhupāda: So these messages are very nice? (laughs)

Devotee (3): What did you say to them, Śrīla Prabhupāda?

Prabhupāda: What was the language?

Lalaji: If it's a just war, you have to fight.

Lalaji: So that if it's a just war, we are going to fight. And the war is coming, Prabhupāda.

Prabhupāda: So that's all right. Why should we be afraid of fighting?

Lalaji: We are not afraid of fighting.

Prabhupāda: We never . . . the Bhagavad-gītā never says that when enemy attacks, you become nonviolent. No, no. Never says. Rather, Gandhi said that, "Yes, I shall . . ." Somebody asked Gandhiji that "If in your presence your wife or your daughter is ravaged, what you will do?" That question was there, actually. But he said that "I shall nonviolence upon . . ."

Prabhupāda: He said that.

Lalaji: He said: "If a duṣṭa does that to you, you hit him back."

Prabhupāda: Who sets fire in my home and who wants to kill me, they're called ātatāyinaḥ. So they should be immediately killed. There's no question of nonviolent. And if the Vaiṣṇava is insulted, he should be killed immediately. That is also . . . Caitanya Mahāprabhu, who advised that we should be humbler than the grass, but practically when Nityānanda Prabhu was insulted, He immediately wanted to kill Jagāi and Mādhāi. So these messages . . .

Lalaji: This has touched people.

Lalaji: This is what they're worried about. Did you know last time there were these signals practicing black-out and all that sort of thing? So now whole country is full of it.

Lalaji: After the festival, Prabhupāda, are you going to Vṛndāvana?

Prabhupāda: Yes, I am thinking of. I have not gone for many years.

Lalaji: Your room is very well kept there. I have been to that place myself.

Lalaji: We have seen that your room is kept well.

Prabhupāda: Yes. Gurudāsa is keeping? So I can go and live in my rooms. The difficulty is that whenever I go, at least another half-a-dozen, one dozen will go.

Prabhupāda: (laughs) So what shall I do? Therefore, otherwise I liked Rādhā-Dāmodara temple, but . . .

Lalaji: We can find a place for them.

Lalaji: We can just go and arrange it if you allow us.

Lalaji: If we go while the festival is on, we can arrange for your place for you and for devotees . . .

Prabhupāda: All right. So, what is your name?

Lalaji: Daughters, they will be bringing with them this evening also, the two daughters.

Prabhupāda: Oh. So how old they are?

Lalaji: One is about seventeen.

Prabhupāda: One I think came yesterday.

Lalaji: Yesterday the two younger ones came. Of the two elder ones, we'll bring this evening. They are eighteen . . . seventeen, eighteen.

Prabhupāda: You are trying to find out some groom? Not yet.

Lalaji: Not yet. I have not done anything.

Prabhupāda: I think you can get them married if you find out good boy.

Prabhupāda: You should see that he is good health and working. That's all. Not idle.