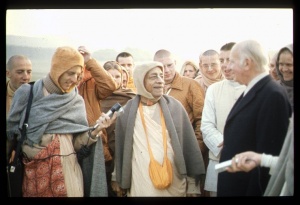 Prabhupāda: The height has been confusing.

Guru Dasa: Yes in rich man's house they have library with books every place, and chairs.

Prabhupāda: And lamps. And go there and sit down on the floor . . . (indistinct)

Guru Dasa: (laughs) even the devotees were having difficulty, I mean Birla . . .

Guru Dasa: This is what we need. That's a very good idea. All over India.

Prabhupāda: Bombay we will have more Diety worship. Everywhere . . . here also Deity worship must go on.

Prabhupāda: Schools and colleges it is recommended that this should be read by the college students.

Guru Dasa: And we will get devotees, many devotees.

Prabhupāda: As soon as they read our books they will come.

Prabhupāda: No. Because they have no clear idea. Vague idea.

Guru Dasa: And people will . . . foolish men will accept it, "Oh he knows so much." Because I don't understand but why not let them understand something. You've seen some of the type of books that?

Guru Dasa: One night in Bombay. When many our students are attracted to look at another book. I tell them the story that one night in Bombay someone gave you a set of his books and you used them as plates for sweets. And handed them back to the devotees.

Prabhupāda: I was thinking of leading a saṅkīrtana party provided I get some. At least half a dozen educated . . . (indistinct) . . . (break)

Prabhupāda: So did you talk with Ramānanda?

Guru Dasa: I sent a telegram and I followed up with a letter, explaining. (break)

Brahmānanda: No. We can have tent.

Prabhupāda: (indistinct) . . . also and in the evening kīrtana.

Prabhupāda: . . . and you will have no expenditure you will go to village and village as you like..

Prabhupāda: If you prepare well.

Guru Dasa: They said they will go from village to village ahead of us.

Prabhupāda: Only thing is four men should go ahead, one village to bring on . . . (indistinct) . . . another some men another village he must hand out special leaflets. Or second batch of tents arranged . . . (indistinct)

Prabhupāda: And this man goes next. They go next.

Prabhupāda: In this way you make nice preparation. Every day new village or a new students. And when . . . (indistinct) . . . take their men travel to the center and go on with saṅkīrtana . . . we have got Hindi books Gita Press we don't require to publish. Gita Press is called Bhāgavata dharma but they are sometimes talking nonsense. Still in the village whenever there is question of Bhāgavata class, oh hundreds and thousands people.

Prabhupāda: Hundreds and thousands of them. (break) there are many temples (break) in the western countries . . . (indistinct)

Prabhupāda: We have to fight with these demons, we have . . . (indistinct)

Brahmānanda: We had that program in Africa.

Brahmānanda: We would go from town to town to town. They would arrange in advance for us and we would just. We didn't even know where we were going, we'd just go. And then we would find out who was in the next town and the next town.

Brahmānanda: Yes and we didn't have to worry about any. Because they would give us all accommodations.

Brahmānanda: No no the Indians, they would give us accommodations booked. We would arrange programs for both Africans and Indians. For the Indians we would arrange either in some big man's house or in some temple and for the Africans (break) halls, they have these halls . . . social halls where they meet. And we did every village and we never had a . . . spend anything. Our food was . . . everyone . . . everything was taken care of. And we collected tons of money, distributed tons of books.

Prabhupāda: Then go on with that. That we need.

Guru Dasa: Did somebody went ahead or not?

Brahmānanda: No they would telephone ahead and they would arrange. They would always know the people in the next town who to contact.

Brahmānanda: Yes, it is very cold.

Prabhupāda: (indistinct) . . . because it is made of earth better arrangement (break) well, new well water . . . (indistinct)

Prabhupāda: Like underneath the tree during winter it is warm and during summer it is cold. I have seen practically in London in Regent's Park there is a small lake. Everything in it . . . what's it called? It becomes . . . ice, the water, what's it called?

Prabhupāda: Frozen, yes. The water is frozen but in parts when there is a tree above the water that wasn't frozen. I marked it, that means it gives warmth.

Prabhupāda: Except that part everything is frozen but the . . . underneath the tree it is not.

Prabhupāda: This I have marked whilst walking. Other parts the seagulls, seagulls?

Prabhupāda: They are walking.

Brahmānanda: But not in that part?

Prabhupāda: That part . . . it's solid for swimming.

Guru Dasa: Yes. Yes, the children they used to also walk and where it gets near the tree they could not walk, the ice would become thin so you don't walk.

Prabhupāda: And rainy season also, the storm, the rain will not keep. The leaves will cover it and give you shelter. In a great storm if you remain underneath the tree you don't feel anything. The tree will do like this (laughs) you remain safe and then if the tree falls down. Generally it does not but sometimes an old tree will displace.

So any amount of wind or storm may go on if you are under the tree you don't feel anything. And if a small canopy underneath the tree will protect you from rain and there rain with full strength cannot, everything falls on the leaves tuk, tak, tuk, tak. On a small canopy . . . nature's way of giving protection not only to the birds, towards the human beings. In Africa when I saw they prepare regular cottage up upon the hill.

Brahmānanda: Yes . . . well when we were in Florida, Gargamuni Svāmī, Viṣṇujana Svāmī and myself we were sometimes staying in a house in a tree.

Prabhupāda: Was it comfortable?

Brahmānanda: Well it was a little small. (laughs) But it was nice.

Brahmānanda: We would sleep there.

Brahmānanda: No no one would come.

Prabhupāda: Even that animals, tigers cannot get up.

Prabhupāda: Snakes may get up.

Prabhupāda: Snake or, or other wild animals.

Guru Dasa: If leave a kerosene lamp and they won't come.

Prabhupāda: Yes, there is light they won't.

Guru Dasa: Very comfortable living in a tree. Simply you make a platform, tie it on, you don't even have to nail, on the branches.

Prabhupāda: Yes, very nice . . . and passing urine and stool that is also not difficult.