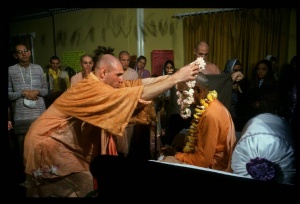 And without marriage, that is not civilized life. Because in the animal society there is no marriage, but in any form of civilized society there is marriage. Everyone has got sex appetite. Therefore, marriage is allowed by the Vedic system. And Kṛṣṇa says in the Bhagavad-gītā that dharmāviruddho kāmo 'smi: "Kāma, lust, which is not against religious principles, that is I am."

So marriage is essential. So far our Society is concerned, we don't allow anybody to remain in our Society as friends, girlfriend or boyfriend. No. They must be married. And these boys and girls, after being married, they are preaching nicely Kṛṣṇa consciousness. All my students who are married, they are doing preaching work more than sannyāsī. Yes. In the Kali-yuga, practically it is forbidden. Sannyāsaṁ pala-paitṛkam kalau pañca vivarjayet, aśvamedhaṁ gavālambhaṁ . . .

Formerly there was a system: if the husband is unable, then a son can be begotten by the husband's younger brother, devareṇa. But in this age, Kali-yuga, that is forbidden. Similarly, aśvamedha yajña, gomedha yajña is also forbidden, because there is no yajñic brāhmin. Formerly, when an animal was put into the fire, sacrificed, and by Vedic mantra it was given a new, fresh life. That was the test of Vedic mantra pronouncing. But that is not possible nowadays. In the Kali-yuga, the only yajña is the sañkīrtana yajña.

Those who are highly intellectual, su-medhasaḥ, they perform the saṅkīrtana yajña, and by that saṅkīrtana yajña, the Lord, whose complexion is not black and who is always chanting Hare Kṛṣṇa mantra and is accompanied by His associates, sāṅgopāṅgāstra-pārṣadam, yajñaiḥ saṅkīrtana-prāyair yajanti hi su-medhasaḥ.

So in this Kṛṣṇa consciousness movement, everything is being performed according to the scriptural injunction. It is not that we are manufacturing something.

So our initiation, our accepting a disciple as brāhmin, they are all strictly according to Vedic injunctions. In this Kali-yuga, there is no vaidika dīkṣā, because vaidika dīkṣā depends on the persons being a, I mean to say, sanctified brāhmin. A sanctified brāhmin means that before his birth, the garbhādhāna-saṁskāra is observed. If it is not observed, then he immediately falls down to the category of śūdra. Kalau śūdra sambhava.

But there is pāñcarātrikī-vidhi given by Nārada, who said that one should be accepted in the category of brāhmin, kṣatriya, vaiśya and śūdra according to symptoms. Yasya hi ya svabhāvasya.

So this Kṛṣṇa consciousness movement, the initiation ceremony, the marriage ceremony, the sacred thread ceremony, whatever we observe, they are strictly according to the śāstra. That is our point.

So for spiritual progress of life, it is necessary that all kinds of sinful activities must be stopped. Without being freed from contamination of sinful life, nobody can make progress in spiritual life. Therefore, who is strictly observe these four principles to avoid, I mean to . . . sinful life. One of them is avaida stri saṅga. Therefore marriage is necessary.