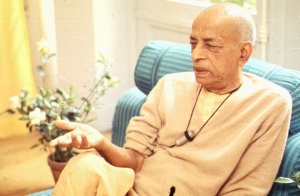 Prabhupāda: These, they do not leave the control. They sell things, and they catch some leaders, they take loan from them, and they take it, and eighty percent for themselves and twenty percent for so on. This is going on, the so-called independent country. In India also, that is being done. America is loaning, and these, ah, those who are in charge of the government, they're spending money in their way . . . (break) . . . purchasing weapons from them.

Actually, the development, and these Britishers and Americans, they're constantly engaging Pakistan in fighting spirit and supplying them ammunition and supplying here. Their business is going on, taking loan from them and paying to them, and they remain debtor perpetually. You give me money, purchase from me, and in books you are debtor. I take your money by supplying some goods. So my money comes back, and you remain a debtor in the book, perpetually. (guest laughs)

Guest: The public did the dee . . . the date, 3-04-80. The interest is calculated every fortnight. So though it is two or three percent, but it works out about eighteen percent in a year.

Guest: You see, it's a sort of, I don't know how to call it. It's . . . not only compound interest, but super-compound interest. Every fifteen days or a month something is added to the capital. So things are . . . but I think Kṛṣṇa consciousness is better for them as well as for us. (laughs). So I will take leave and come tomorrow at four o'clock. Hmm? Dalmiyaji . . . dalmiyaji has been here? Jai Dayal Dalmiyaji?

Prabhupāda: Give him that prasādam.

Gurudāsa: Even the security governments know us. One time there was this Mr. Fugarty from Florida. Remember, Mahā-puruṣa went to see him? First Dayā . . .

Gurudāsa: So he came to London, and he wanted to meet with us. But he didn't know our address, so he looked in the Central Intelligence files, and they had our address, and he came to see us. (laughs)

Gurudāsa: He was cryptologist, code . . . code breaker, for the government.

Gurudāsa: When secret codes would come in, he would decode them by formula. That was his job.

Prabhupāda: But . . . do it . . . (indistinct) . . . with enthusiasm. In this way simply this advertisement goes out, village to village. And at least, you become popular in the world.

Tamāla Kṛṣṇa: But we should leave at least one devotee in each village.

Prabhupāda: But difficulty is you do not know the local language.

Gurudāsa: Hmm. When Caitanya Mahāprabhu was here, there was one language? Because the . . .

Gurudāsa: There was that nice story, that one person was coming to defeat one of the associate of Caitanya Mahāprabhu—it was Narottama dāsa Ṭhākura. So his disciples, he said: "If they want me to leave, I will leave." So his disciples posed as a cobbler and a betel-seller, and when they came to . . . a potter and a betel-seller. When they came to buy betel they spoke Sanskrit. And they thought, "Oh, Narottama dāsa Ṭhākura is teaching the common betel-seller Sanskrit, then how can we compare with this?" It's a very nice story. (break)

Prabhupāda: Then give another one.

Prabhupāda: And whatever things we require, you give him a list and they'll supply. So if you cook, that's all right; otherwise they have got their cooks. So take that advantage. You talked with Nārāyaṇa dāsa?

Prabhupāda: But at that time he did not give us some facility.

Gurudāsa: At that time he was sick in bed.

Gurudāsa: Blood pressure, high. So he said: "Arrange with these other people, then I will come and see that it is all right."

Prabhupāda: Oh. So when he came, he was informed that I had left. So somebody said: "No, he's upstairs," and he came to see me. (Gurudāsa laughs)

He's my old friend. He knows me.

Prabhupāda: Not League of, but he knew me when I was there. Wherever my books were published, he came to purchase one.

Gurudāsa: I spoke to them about putting some books in that shelf, they said yes.

Prabhupāda: Not shelf, they purchase.

Prabhupāda: Ask them to purchase.

These, all the gosāis and bābājīs, they're actually sinful. And some of them are . . . those who are sincere, they're surprised, that "We are so long in Vṛndāvana, we cannot have saṅkīrtana like that. What is the reason?" They're searching. I told them, "You do not follow the rules and regulation." First of all I told them that, "You have no bona fide guru."

Prabhupāda: Or you're not bona fide student. There must be some defect. Anandamayi's men also came to invite me.

Gurudāsa: She was there, yes.

Prabhupāda: She's . . . she has got some party for saṅkīrtana.

Gurudāsa: Yes. She was in Calcutta, she told me.

Prabhupāda: She has become something, incarnation, like that. That is his proposal. And she cries.

Prabhupāda: She is simply exploiting some women's sentiments, by giving them some deity and crying. And woman, they're simple. This way, she wanted to captivate donors. I know that. She has got some foolish woman, innocent woman. I say foolish, innocent. And naturally their husbands become inclined.

Prabhupāda: Actually she has no . . . she is not a preacher. She is a sentimental so-called religionist among some women, and naturally their husbands . . . and she has no objection. Whatever you do, it doesn't matter. Therefore she is getting some followers, and posing herself as . . . she's opening hospital. That means she has no asset.

Prabhupāda: We are going without opening hospital and school, rather challenging . . . (Gurudāsa laughs) . . . and diminishing everything, decrying. We do not agree with anyone, and still people like us. Is it not?

Prabhupāda: Our first proposition is that, "You do not know anything." (Gurudāsa laughs) (laughs) And still they agree to come to us.

Prabhupāda: Yes, yes. Walking in the morning, and someone came to me, "Ah, we thought that somewhere you have gone." When we have got regular center here, they should come.