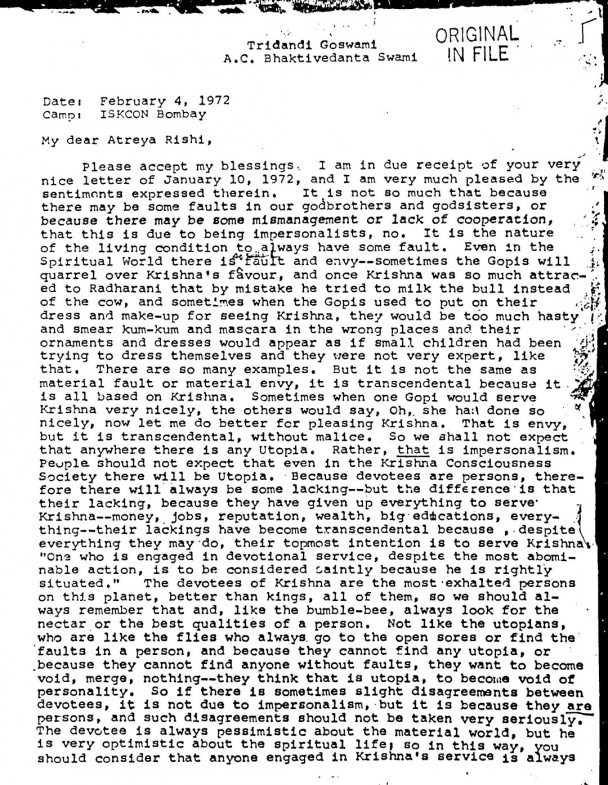 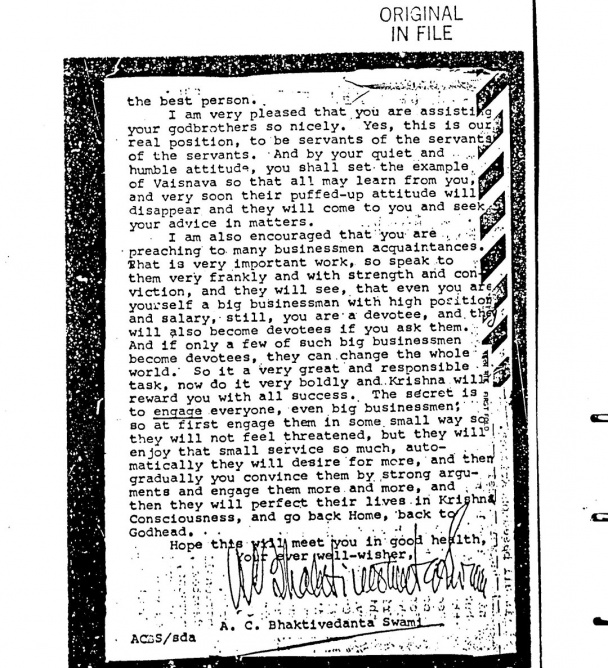 Please accept my blessings. I am in due receipt of your very nice letter of January 10, 1972, and I am very much pleased by the sentiments expressed therein. It is not so much that because there may be some faults in our godbrothers and godsisters, or because there may be some mismanagement or lack of cooperation, that this is due to being impersonalists, no. It is the nature of the living condition to always have some fault. Even in the Spiritual World there is some [handwritten] fault and envy--sometimes the Gopis will quarrel over Krishna's favor, and once Krishna was so much attracted to Radharani that by mistake he tried to milk the bull instead of the cow, and sometimes when the Gopis used to put on their dress and make-up for seeing Krishna, they would be too much hasty and smear kum-kum and mascara in the wrong places and their ornaments and dresses would appear as if small children had been trying to dress themselves and they were not very expert, like that. There are so many examples. But it is not the same as material fault or material envy, it is transcendental because it is all based on Krishna. Sometimes when one Gopi would serve Krishna very nicely, the others would say, Oh, she has done so nicely, now let me do better for pleasing Krishna. That is envy, but it is transcendental, without malice. So we shall not expect that anywhere there is any Utopia. Rather, that is impersonalism. People should not expect that even in the Krishna Consciousness Society there will be Utopia. Because devotees are persons, therefore there will always be some lacking--but the difference is that their lacking, because they have given up everything to serve Krishna--money, jobs, reputation, wealth, big educations, everything--their lackings have become transcendental because, despite everything they may do, their topmost intention is to serve Krishna. "One who is engaged in devotional service, despite the most abominable action, is to be considered saintly because he is rightly situated." The devotees of Krishna are the most exalted persons on this planet, better than kings, all of them, so we should always remember that and, like the bumble-bee, always look for the nectar or the best qualities of a person. Not like the utopians, who are like the flies who always go to the open sores or find the faults in a person, and because they cannot find any utopia, or because they cannot find anyone without faults, they want to become void, merge, nothing--they think that is utopia, to become void of personality. So if there is sometimes slight disagreements between devotees, it is not due to impersonalism, but it is because they are persons, and such disagreements should not be taken very seriously. The devotee is always pessimistic about the material world, but he is very optimistic about the spiritual life; so in this way, you should consider that anyone engaged in Krishna's service is always the best person.
I am very pleased that you are assisting your godbrothers so nicely. Yes, this is our real position, to be servants of the servants of the servants. And by your quiet and humble attitude, you shall set the example of Vaisnava so that all may learn from you, and very soon their puffed-up attitude will disappear and they will come to you and seek your advice in matters.
I am also encouraged that you are preaching to many businessmen acquaintances. That is very important work, so speak to them very frankly and with strength and conviction, and they will see, that even you are yourself a big businessman with high position and salary, still, you are a devotee, and they will also become devotees if you ask them. And if only a few of such big businessmen become devotees, they can change the whole world. So it a very great and responsible task, now do it very boldly and Krishna will reward you with all success. The secret is to engage everyone, even big businessmen; so at first engage them in some small way so they will not feel threatened, but they will enjoy that small service so much, automatically they will desire for more, and then gradually you convince them by strong arguments and engage them more and more, and then they will perfect their lives in Krishna Consciousness, and go back Home, back to Godhead.
Hope this will meet you in good health,
Your ever well-wisher,