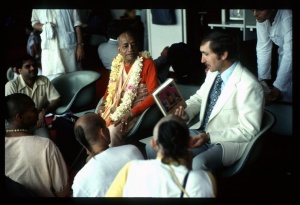 Devotees: All glories to Śrī Guru and Gauranga.

But gradually—this is a long history—in a very short time this movement has spread all over the world by the cooperation of my American disciples, both boys and girls. Now we have got more than ninety branches all over the world, and we have come here in Bombay to open this center in this place where we are now sitting. So by your cooperation we wish to develop this center into a very large institution for spreading Kṛṣṇa consciousness.

This Kṛṣṇa consciousness movement is very important at the present moment. It is important in this sense, that throughout the whole world, I have traveled, everyone is practically without God consciousness. This means that this human form of life, which is achieved after many, many births, labdhvā su-durlabhaṁ bahu-sambhavānte (SB 11.9.29).

Bahu-sambhavānte: after many, many births. There are 8,400,000 species of life—aquatics, then plants, trees, insects, birds, bees, then uncivilized human being, then civilized human being. In this way, especially in India we are considered to be very advanced in culture and religion, still. I read one book written by one Chinese gentleman. It is recommended in the New York University for studies in comparative, philosophical and religion class. In that book this Chinese gentleman writes that "If you want to know about religion and culture, then you have to go to India."

So our background, this Vedic civilization, is very great. We should remember it always. Now these boys, American boys, European boys, they have come to India not to see your industrial improvement or economic development. They have seen enough of these things in their own country. They are highly economically developed, industrially, so they have nothing to learn about these things from India. They have come here to understand Kṛṣṇa consciousness, or God consciousness. Even the yogic activities, aṣṭa-siddhi-yoga, practically by mechanical arrangement they almost come to the perfection of yogic principles. Just like the yogī, by his laghimā-siddhi he can fly in the space.

But they are also flying by sputniks and other aeronautics. But that is not very important. Real important thing is God consciousness. That is the present necessity throughout the whole world, because by nature's own way this human form of life is offered to understand, "What I am? What is God? What is this material world? What is our interrelation? Why I am suffering threefold miserable condition of life? Whether there is any remedy?" Of course, everyone is trying to mitigate the miserable condition of life, but it is being attempted not in the right way. In Bhagavad-gītā it is said:

This akhilam jagat, entire cosmic manifestation, is the resultant action of two energies of the Supreme Personality of Godhead. That is explained in the Bhagavad-gītā: prakṛti. One prakṛti means material energy; another, spiritual energy. Bhūmir āpo analo . . . bhinnā me prakṛtir aṣṭadhā (BG 7.4). Aṣṭadhā, eight . . . (indistinct) . . . eight kinds of energies: earth, water, air, fire, ether, mind, intelligence, ego. These are inferior energies of the Supreme Lord, and the superior energy we are—the living entity.

In the Vedas also it is stated:

So there is a great science, and we have got this in India. And in the Bhagavad-gītā everything is very nicely explained, and for further understanding there is Śrīmad-Bhāgavatam. So Bhagavad-gītā is spoken by Kṛṣṇa, and Śrīmad-Bhāgavatam is spoken by Vyāsadeva about Kṛṣṇa. Vyāsadeva begins Śrīmad-Bhāgavatam, oṁ namo bhagavate vāsudevāya (SB 1.1.1). This vāsudevāya means Kṛṣṇa. That is explained by Śrīdhara Svāmī. We shall take up this explanation from tomorrow. We shall begin Śrīmad-Bhāgavatam from the beginning, janmādy asya yataḥ: the original source of all emanations, as it is stated, described in the Vedānta-sūtra, janmādy . . . athāto brahma jijñāsā (Vedānta-sūtra 1.1.1).

So these kṛṣṇa-kathā, knowledge about Kṛṣṇa, is very wide and vast, so one should try to understand Kṛṣṇa. And especially in India we can understand it, because culturally we are Kṛṣṇa-ites, but we have forgotten. We are not forgetting our culture, but it is so nice that foreigners in Europe and America, Canada, Japan, Australia, they are taking it very serious, Kṛṣṇa consciousness.

So this is an attempt, this camp is an attempt to invite our countrymen. We have already done such festival in the Cross Maidan, and I was very glad to see twenty to thirty thousand people were daily assembling for ten days, and they were very kind upon us. In spite of all inconveniences they used to come, and they wanted that the program should have been extended. But we could not do so, we were searching after some place. So Kṛṣṇa somehow or other has given us this place. So let us cooperate to understand Kṛṣṇa, that's all.

But we have to understand Kṛṣṇa in truth, not by fiction or imagination or concoction. In truth what is Kṛṣṇa.

If you understand Kṛṣṇa, then after leaving this body no more transmigration to another material body. Punar janma . . . janma, birth, takes place of this material body, not of the soul. The soul, na jāyate na mriyate vā: the soul never dies or takes birth. The so-called birth is the birth of this body. Therefore anyone who understands Kṛṣṇa, he does not take anymore this material body, tyaktvā dehaṁ punar janma naiti. Then where does he go? Because soul is eternal, I am eternal, you are eternal. We are passing through different phases of material body. So by understanding Kṛṣṇa, tyaktvā dehaṁ punar janma: no more material birth. Then where does he go? Mām eti: he goes back to home, back to Godhead.

This is the sum and substance of Kṛṣṇa consciousness movement. The idea is that the living entity, this part, part and parcel of the Supreme Lord, he is in contact of this material world, and the disease is:

Because we are in this material body there is birth, there is death, there is disease and there is old age. So our advancement of education has not discovered anything which can stop birth, death, old age and disease. That is not possible. Not only in this planet, but you go even to the higher planet, there is no excuse from this material condition.

That is stated. Even if you go to the Brahmaloka:

So try to understand that this human form of life is especially meant for stopping this botheration of repeated birth, death, old age and disease. You cannot stop it by so-called material advancement of knowledge. That is not possible. So this prerogative of the human being must be given to them. That is the greatest welfare activities. People do not know how to do good to others. They temporarily, they get some relief; but that will not give him actually comfort of life. Here is the greatest relief, Kṛṣṇa consciousness. If anyone simply understands Kṛṣṇa, he gets relief from all botheration.

Just make . . . make your life successful. We have got all the Vedic literatures how to make our life successful. So unfortunately we are neglecting our great spiritual assets, and we are enamored by the so-called material civilization. That is the present condition of India. But I see after traveling three times all over the world, I see that there is a great demand for Kṛṣṇa consciousness all over the world. They are no more interested in so-called gloss of yoga-siddhi and so-called Vedānta-siddhi. They want something factual.

So I request that those who are intelligent persons, especially Indian, especially young men, they should come and join this Kṛṣṇa consciousness movement and spread this Indian culture, or Vedic culture, throughout the whole world. That will enhance the glories of India. You cannot compete with the Western countries by so-called industrialization or economic development. You will always be hundred years back from their advancement. But if you want some credit of your country, then try to spread this Kṛṣṇa consciousness movement.

Make your life first of all successful by understanding what is Kṛṣṇa consciousness movement, and then hundreds of you may go to the foreign countries outside India to preach this great philosophy. You will be honored; your country will be glorified. So single-handed I have tried a little, and I am very glad to inform you the response is very great. So similarly you should go, many of us. Then India's glories will be very much magnified, that I can assure.

So how to make your life successful by understanding our Vedic culture we shall present as far as possible from the Bhagavad-gītā and Śrīmad-Bhāgavatam. I have been honored by the managing committee of this festival that I shall speak in Hindi in the morning and I shall speak in English in the evening. And if so . . . in the Cross Maidan, also Calcutta, Madras, Delhi, our festival, this Hare Kṛṣṇa movement festival, was very, very successful in all these cities. In your city also it was very successful in last May.

Now we have come to this place. It is not very, I mean to say, exposed, just like Cross Maidan, it is written in the name. But you can come here very easily and encourage us to explain what is Kṛṣṇa consciousness. And from tomorrow regular meeting work will begin, and we shall be very much thankful to you if you come and cooperate with us.