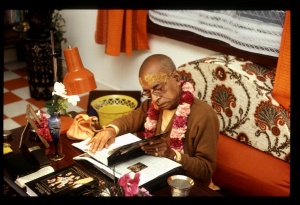 Prabhupāda: . . . for your kindly participating in this great movement coming from India. So we are discussing the answer given by Sūta Gosvāmī to the saintly persons, brāhmin, who assembled at Naimiṣāraṇya to have a discourse on Śrīmad-Bhāgavatam.

So when the question was there that after departure of the Supreme Personality of Godhead, Kṛṣṇa, from this planet to His abode. That we have already described, what is Kṛṣṇa's abode. Kṛṣṇa's abode is there in the spiritual world. Just like we have got various types of planets within this universe, and there are innumerable universes, and in each and every one of them there are millions and trillions of planets. This is only one-fourth manifestation of Kṛṣṇa's creation, including all these universes. That is stated in the Śrīmad Bhagavad-gītā:

This whole material world is one-fourth manifestation of one-fourth energy of Kṛṣṇa. The three-fourths energy is exhibited in the spiritual world. Here, the living entities in all these universes, they are very minority. Just like in the prison house you cannot expect the majority of the population. The majority of population is outside the prison house. Only a few number of criminals, they are in the prison house. Similarly, all these living entities who are within this material world . . . it is called durga. Durga, durga means fort, and the superintendent of this durga is called Durgā, durga-śakti:

So Kṛṣṇa's opulence is unlimited, ananta. Therefore His another name is Ananta. Advaitam acyutam ananta. There is . . . this is the description of the Brahmā-saṁhitā:

He is advaita. Advaita means He is not different from anything, because anything we see, that is energy of Kṛṣṇa: parasya brāhmaṇaḥ śakti tathaiva akhilaṁ jagat. In the Viṣṇu Purāna (1.22.52) it is said:

Akhilaṁ jagat: all these universes are exhibition of the energy of Kṛṣṇa, just like the fire can distribute its heat and light from one place. The example is the sun—the great fire, the greatest fire within this universe, it is distributing the heat and light from one place. You can see, everyone, the sun globe. It is lying in one corner of this universe. Although the sun globe is fourteen hundred times . . . fourteen hundred thousand times bigger than this earth, still you can see that it is lying in one corner.

We do not know how much powerful, omnipotent is Kṛṣṇa. Without knowing His power, we treat Him as ordinary person—maybe very big person or great person. No. That is our poor fund of knowledge. Avajānanti māṁ mūḍhā, paraṁ bhāvam ajānanto (BG 9.11). Such persons, such mūḍhās, they do not know what is Kṛṣṇa. Therefore Kṛṣṇa says, manuṣyāṇāṁ sahasreṣu kaścid yatati siddhaye (BG 7.3). Siddha means one who is factually in knowledge of everything. He is called siddha. And yatatām api siddhānāṁ kaścin: there are many jñānīs, yogīs, they are called siddhas, but out of many millions of such siddhas, one may or may not understand Kṛṣṇa. Therefore He says, avajānanti māṁ mūḍhā . . . paraṁ bhāvam ajā.

So here Sūta Gosvāmī says, munayaḥ sādhu pṛṣṭo 'haṁ: "Oh, your question is welcome." Sādhu. When there is something very glorious, we welcome by saying, "Sādhu, sādhu," "It is very nice, very nice," sādhu. Amongst the learned scholar, Vedic scholar, when they approve something they say, "Sādhu, sādhu," "Very good." So when Kṛṣṇa question was asked by the audience, "After departure of Kṛṣṇa, the knowledge and dharma," dharma jñāna . . . these two things are very essential things in the human society.

Without dharma and without jñāna it is animal society. Jñāna means to know, self-realized, what I am. That is jñāna. And after jñāna there is dharma. Dharma means occupational duty. If you do not know what is your constitutional position, then how your occupational duties can be ascertained? Therefore dharma-jñāna-ādibhiḥ saha. So that is jñāna. When we understand that we are part and parcel of Kṛṣṇa, we are eternal servants of Kṛṣṇa, that is jñāna. And after having this jñāna in full, then our dharma—actual dharma—begins.

So Kṛṣṇa directly says, sarva-dharmān parityajya mām ekaṁśaraṇaṁ vraja (BG 18.66). This surrender unto Kṛṣṇa is dharma. Other things, which does not teach how to surrender to Kṛṣṇa, that kind of dharma is called kaitava-dharma, cheating dharma. Therefore Bhagavata says, dharmaḥ projjhita-kaitava atra: all cheating type of religious principles are completely rejected. Cheating type, kaitavo, this very word. And Śrīdhara Svāmī comments on this that liberation, mokṣa-vāñchā, to become one with the Supreme, that is also another type of cheating. Why it is cheating, that is explained. We have discussed all these points.

Now here Sūta Gosvāmī says that, "Your question about Kṛṣṇa is very, very nice. It is welcome." Why it is very, very nice? Munayaḥ sādhu pṛṣṭo 'haṁ, bhavadbhir—by you; loka-maṅgalam. If Kṛṣṇa questions and answers are discussed simply, all over the world, everything will be nice, peaceful, loka-maṅgalam. People are anxious for peace, tranquillity, all over the world, but they do not know how to establish it. That secret . . . (break) (end)