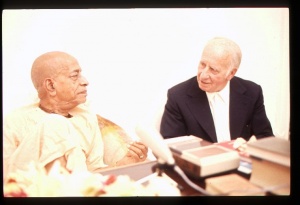 Prabhupāda: . . . or one is situated in his external existence, if he happens to remember Kṛṣṇa or Viṣṇu, puṇḍarīkākṣam, sa bahyābhyantara-śuciḥ (Garuḍa Purāṇa), he immediately becomes purified internally and externally.

So you are getting initiation in this auspicious day when Lord Kṛṣṇa and Rādhārāṇī, His eternal consort, is now being situated, er, established, installed, on this auspicious moment, and you will be initiated to chant the Hare Kṛṣṇa mantra in the beginning:

As it is indicated in this verse, one who remembers the Supreme Personality of Godhead always, he remains always purified, śuci. Śuci. Śuci means . . . another meaning of śuci is brāhmaṇa, purified.

A brāhmaṇa . . . according to nature's division, there are four classes of men: the brāhmaṇa, the kṣatriyas, the vaiśyas and the śūdra. Brāhmaṇa means the intellectual class of men who knows hygienic rules, keeps himself always purified and engaged in studying Vedic literatures for understanding this world, God, himself, the interrelation. They are called brāhmaṇa. And the kṣatriya means those who live their life under the instruction of the brahmin but they are engaged in administration of the state, they are called kṣatriyas. Then vaiśyas, still less intelligent class.

So śuci means the first-class intellectual class of men. So anyone who is always chanting the holy name of God and keeps himself purified, he is śuci. Śuci means the first-class purified intelligent class of man. So they are called brāhmaṇas in Sanskrit. So it is not that the brāhmaṇas are to be found in India only. Any intelligent class of men, anyone who takes to Kṛṣṇa consciousness, he is brahmin.

So a brahmin is, the qualification of brahmin is:

So a brahmin should be truthful in any circumstances. He will never speak lie. Truthful, satya. Śama. Śama means keeping the mind always in equilibrium. And dama, dama means keeping the senses under control. Śama dama titikṣa. Titikṣa means toleration. There may be so many tribulations, but a brahmin is supposed to be very, very tolerant. Toleration.

The first-class example of toleration in the Western country: Lord Jesus Christ. He was being crucified; still, he did not take any steps. If he wanted, he could take steps, but he was tolerating. So this is the sign of brahminical symptom. Titikṣa ārjava. Ārjava means simplicity. A brahmin is not supposed to be crooked and duplicity. No. Simple.

So our this Kṛṣṇa consciousness movement is the greatest welfare activity for the human society because this movement is educating everyone how to fulfill the aim of life. The purport of the verse:

Hare Kṛṣṇa. Now give them beads.

Devotee (1): They were for the wedding.

Prabhupāda: Wedding? There is wedding also? All right. Keep it.

Devotee (2): I have some flowers for the temple room.

Prabhupāda: So you know the rules and regulations? What is that?

Prabhupāda: What is his original name?

Prabhupāda: Dhaumya. Your name is Dhaumya dāsa, Dhaumya dāsa, one of the commander in the battlefield of Kurukṣetra, Dhaumya. (laughter) Don't laugh. Hare Kṛṣṇa. Now bow down here. (japa)

John: No intoxication, no meat-eating, no gambling and no illicit sex life.

Prabhupāda: So how many rounds you will chant?

Prabhupāda: Yes. What is the name?

Prabhupāda: Your name is Jayadharma dāsa. Yes. He is one of the ācāryas in the Madhva-Gauḍīya sampradāya. Bow down and take. Hare Kṛṣṇa. Go on chanting. Go on like this. (japa)

You know the rules? Yes.

Cheryl: No meat-eating, no intoxication, no gambling and no illicit sex.

Prabhupāda: And how many rounds you will chant?

Prabhupāda: Minimum, yes. What is your name?

What is it? What is it you have got? Do you know rules?

Mignonne: No meat-eating, no illicit sex, no gambling, no intoxicants.

Prabhupāda: What is your name?

Mix it nicely and distribute. (japa) You wait. Stop. I have sent this. You have not signed? If it is difficult, there is no . . . yes. All right.

What is your name? You know the rules?

Della: No meat-eating, no illicit sex, intoxication and no gambling.

Prabhupāda: So your name is Devadarśana dāsī, "who can see all the demigods." Right hand. (japa)

Give them garland. After initiation they'll exchange it. Give them. Give them on the . . . yes. On their neck? You can sit down here. Where is that red powder? Get some. You sit there. He sits here. After changing garlands they will change place, and the bride will give the powder and cover her head. No, the bride, bridegroom, yes.

Prabhupāda: Sanaka dāsa. Know rules and regulations? What is that?

Sanaka: No meat-eating, no illicit sex, no gambling and no intoxication.

Prabhupāda: That's good. And how many rounds?

Śyāmasundara: "Henceforward from this day . . ."

Prabhupāda: Why you are laughing? It is laughing thing? I told you first, don't take anything very lenient. Very serious.

Śyāmasundara: "I, Sanaka dāsa, (Sanaka dāsa repeats) do hereby promise from this day henceforward to always protect and take for my wife Devadarśana dāsī."

Śyāmasundara: Now, "I, Devadarśana dāsī, (Devadarśana repeating) do from this day henceforward, I do promise to always serve and obey my husband, Sanaka dāsa."

Prabhupāda: Now change the garland. Now give her the vermilion, red powder. Cover her head.

Prabhupāda: Do like that. Now you come this side.

Even if you fight, you can remain in one temple, he can remain, but there is no question of divorce. So take in mind. That's all. Now have this . . .

Śyāmasundara: They have a gift for you. Shall I give it now?

Have you got little straw?

Prabhupāda: Yes, that will help. Ohhh, you do not know. You never done it.

Devotee Priest: Should I begin to chant?

Prabhupāda: Go on. Go on.

Prabhupāda: Now stand with banana, all. Take the banana and stand up. You also take.

Svāhā. Now put. Put those bananas one after another. Put. Put that stick also.

Now, you changed your cloth? You chant,

Devotee: Shall I put a shirt on?

Devotee: Some Gāyatrī mantras for some brāhmaṇas.

Prabhupāda: All the initiated they should take and correct them. (japa)

So, nothing prepared? Heh?

Devotee: It's not quite finished yet.

Prabhupāda: (indistinct) . . . after bhoga ārotika, has to be performed. So bring bhoga. (japa)

Translation: "I shall cross over the insurmountable ocean of darkness of ignorance simply by taking shelter of the lotus feet of Lord Mukunda, who gives all kinds of liberations and was worshiped by many great previous ācāryas."

Purport. "There are sixty-four kinds of rendering service to the Supreme Personality of Godhead, out of which, to accept the uniform dress of a tridaṇḍī-sannyāsa is also an important item. One who accepts this order of life, surely by rendering service unto the Supreme Lord, becomes eligible to cross over the insurmountable ocean of ignorance. All previous sages used to accept such order of life, and later ācārya, Viṣṇu Svāmī, adopted this order of life and firm conviction in the matter of devotional service."

"Those who are unalloyed devotees, they add one more staff along with the original three. This extra one is representation of the living entity. There is another sect who are known as ekadaṇḍī sect. They misunderstand the purpose of tridaṇḍa,"

. . . and by such deviation, Śrīvāsa Swami sannyāsa, who proclaimed to belong to the Viṣṇu Svāmī sect, turned to be impersonalists and follow the footsteps of Śaṅkarācārya, accepting only the ekadaṇḍa.

Instead of naming themselves out of the 108 names of Vaiṣṇava sannyāsīs, this Śrīvāsa Swami sect accepts ten names of the sannyāsī, following Śaṅkarācārya. Lord Caitanya, although in terms of the practice at that time, accepted ekadaṇḍī sannyāsa order, but He acceptance the tridaṇḍi sannyāsa is understood.

This mantra was first chanted by a learned brāhmaṇa of Avantipur after being very much disgusted in this materialistic way of life. This happened long, long years ago because it is mentioned in the Bhāgavatam, which was composed by Vyāsadeva at least five thousand years ago. So it is to be concluded, therefore, that this tridaṇḍī sannyāsīn order is coming down since a time long, long years ago. And within five hundred years of time Lord Caitanya adopted this order of life.

And in the latest years His Divine Grace Bhaktisiddhānta Sarasvatī Thakur Prabhupāda adopted it personally and he made many of his disciples tridaṇḍī sannyāsīs. We are also following his footsteps, and the purport of this mantra is that the ekadaṇḍī sannyāsī is devoid of paramaṁ niṣṭha, which is explained above. In other words, impersonalists cannot have any faith in the Supreme Personality of Godhead, and they prefer to merge into the impersonal Brahman effulgence.

They have no inclination to render service unto the Supreme Personality of Godhead. Being very much disgusted by the materialistic way of life, they do not understand the purpose of the sannyāsa order. Those who are strictly followers of the Vaiṣṇava principles, they do not accept the Māyāvādī way of sannyāsa. In the sect of Lord Caitanya, the most venerable learned scholar known as Gadādhara Pandit Gosvāmī accepted this tridaṇḍī sannyāsa order, and he offered this facility to his disciple known as Śrī Mādhava Upadhyaya.

This Mādhava Ācārya is the origin of the Vallabhācārya sect. One of the Six Gosvāmīs, Gopāla Bhaṭṭa Gosvāmī, who is the authority of Vaiṣṇava regulations, was initiated by another tridaṇḍī sannyāsī known as Prabodhānanda Sarasvatī. Therefore this sannyāsī order is completely in pursuance of Vaiṣṇava authority.