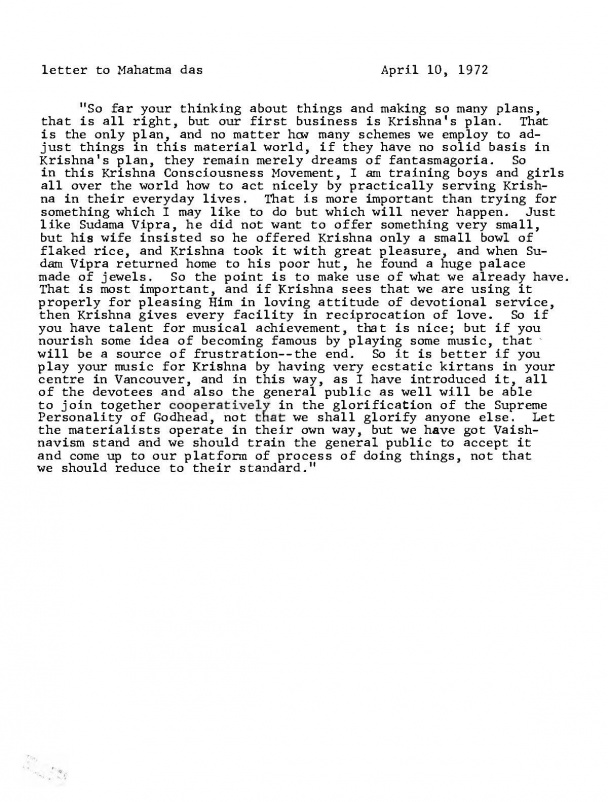 "So far your thinking about things and making so many plans, that is all right, but our first business is Krishna's plan. That is the only plan, and no matter how many schemes we employ to adjust things in this material world, if they have no solid basis in Krishna's plan, they remain merely dreams of phantasmagoria. So in this Krishna Consciousness Movement, I am training boys and girls all over the world how to act nicely by practically serving Krishna in their everyday lives. That is more important than trying for something which I may like to do but which will never happen. Just like Sudama Vipra, he did not want to offer something very small, but his wife insisted so he offered Krishna only a small bowl of flaked rice, and Krishna took it with great pleasure, and when Sudama Vipra returned home to his poor hut, he found a huge palace made of jewels. So the point is to make use of what we already have. That is most important, and if Krishna sees that we are using it properly for pleasing Him in loving attitude of devotional service, then Krishna gives every facility in reciprocation of love. So if you have talent for musical achievement, that is nice; but if you nourish some idea of becoming famous by playing some music, that will be a source of frustration--the end. So it is better if you play your music for Krishna by having very ecstatic kirtans in your center in Vancouver, and in this way, as I have introduced it, all of the devotees and also the general public as well will be able to join together cooperatively in the glorification of the Supreme Personality of Godhead, not that we shall glorify anyone else. Let the materialists operate in their own way, but we have got Vaishnavism stand and we should train the general public to accept it and come up to our platform of process of doing things, not that we should reduce to their standard."