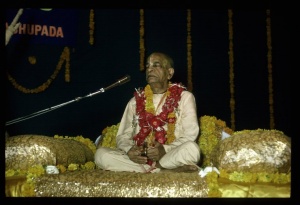 Prabhupāda: . . . gītā. Unfortunately, there are so many interpretations by so many unscrupulous persons, so-called scholars and philosophers, that they have spoiled the precept of Bhagavad-gītā. So we are just trying to present Bhagavad-gītā as it is to the world, and I am very happy to inform you, you know, that all over the world, wherever I am going, I am preaching this philosophy, they are being accepted. So I am also very glad that in this distant place, Hong Kong, from India, you are training your children in Kṛṣṇa consciousness. It is a very good sign. Their life will be very happy. So continue this process, try to understand the Kṛṣṇa philosophy, try to help this movement.

I may refer in this connection that Subhas, you know Netajī, he organized his Indian National Army outside India, because in India he was unable to organize. The circumstances were so awkward, even Mahatma Gandhi would not allow him. That was his position. So you know very well how Subhas Chandra Bose came out of his country and organized the INA movement, and practically India's got independence due to Subhas Bose's INA movement, not Gandhi's non-cooperation movement. That is a fact.

Actually they are being benefited. All these boys from Europe and America, how they are making advancement in spiritual consciousness you have seen, one or two examples. There are many thousands, and they are accepting it very seriously. So this movement is very important movement, and it is India's gift, and I would request you all Indians present here to support this movement:

This body, to make this body successful, this human form of body is meant for making our life success. Otherwise, if you remain like cats and dogs, that is not success. The success is:

You may remain a Brāhmin, varṇāśrama, varṇa and āśrama, as I have already explained. Whatever you may be, you must be within this one category, either Brāhmin or Kṣatriya or Vaiśya or Śūdra or brahmacārī, gṛhastha, vānaprastha or sannyāsī. In whichever classification you may remain, it doesn't matter, but try to see that your life is successful.

There are divisions of social order or spiritual order, but one should try to see . . . (indistinct) . . . he must try to see that his life is successful. And what is that life is successful? Varṇāśrama-vibhāgaśaḥ. Svanuṣṭhitasya dharmasya saṁsiddhir hari-toṣaṇam: you have to see whether by your activities, by your behavior, by your actions Kṛṣṇa is satisfied. That is all. If you try to understand this only one point, that by your work Kṛṣṇa is satisfied . . . just like Arjuna satisfied Kṛṣṇa by fighting. Similarly, by your whatever occupation you are doing, if you try to satisfy Kṛṣṇa, that is perfect.

So our Kṛṣṇa consciousness movement is meant for that purpose, and we . . . you are already helping, and we shall be very glad if you cooperate and push this movement all over the world. Thank you very much.

Prabhupāda: They have not yet come?

Prabhupāda: They have come?

Prabhupāda: No, they have come?

Śyāmasundara: Yes, they have come . . . (indistinct)

Prabhupāda: If there is any question you can ask, on the subject matter on which we . . . eh?

Devotee: This is Larry Mack.

Prabhupāda: What is that? Oh. This is for sannyāsī, or for lady? (laughter)

Devotee: It is for the health.

Prabhupāda: Oh, thank you very much. I am very glad that you have trained, so many boys. Undo this. Hmm. Yes?

Devotee: We read them Kṛṣṇa book and we ask them questions at the class.

Prabhupāda: Hmm. Forest fire, nobody goes to set fire in the forest, but it takes place. Therefore this material world is compared with forest fire. However you may try to keep yourself in peace and tranquility by your dealings with one another, there will be misunderstanding, and both the parties will suffer.

Just like we tried to become independent out of the hands of the Britishers, to live peacefully, but the Pakistan and the Hindustan is still going on and fighting. Formerly the fighting was not organized; somewhere in the cities in some quarters there was fight. Now it is organized fight with lethal weapons. This is the position of the world.

The United Nation is trying to stop war, but the war is increasing. They could not stop the Vietnam War. It is going on for the last fifteen years. So this forest fire example is there: nobody wants to set fire in the forest, but automatically, by nature's way, this world is such that there will be fire in the forest, and all the living entities within the fire, they will suffer. Similarly, this whole material world is just like a forest fire. But if we take the shelter of Kṛṣṇa, then He will swallow up the fire.

Prabhupāda: You have seen the picture, Kṛṣṇa is eating.

That is stated in the Bhagavad-gītā.

So long you do not surrender to Kṛṣṇa, there will be forest fire always within your heart. Saṁsāra-davanale, divā-niśi hiyā jvale (Gītāvalī). The heart will be burning always. Any big man or small man who has no information of Kṛṣṇa, his heart is always burning. Sadā samudvigna-dhiyām asad-grahaḥ (SB 7.5.5). This forest fire is like that. Nobody wants forest fire, but it takes place.

Therefore the forest fire is going on, and we are trying to draw the cloud of Kṛṣṇa and pour water on it. That is our mission.

Śyāmasundara: There is a man here from a radio station. He would like to have a short interview with you if possible.

Prabhupāda: Yes. I have already spoken. (break) Have you taken it?

Devotee: You have a question?

Reporter: Could you explain the Hare Krishna movement briefly to our listeners?

There are multi-energies of the Supreme Lord. They are practically working everywhere. Just like fire, fire . . . in one place there is fire, but it is distributing the energy. Just like in one place there is sun planet, and the heat and light is being distributed. The heat and light is sun, at the same time not sun. So there is energy of the Supreme Lord, Kṛṣṇa. Those energies, spiritual energy and material energy, they are working.

And another advantage is God is absolute. There is no difference between His name and God. Just like here, there is difference. If you want water, simply "water, water" will not act. You must have the substance water, because it is relative world. But in the absolute world, Kṛṣṇa and His name, Kṛṣṇa the person, Supreme Person, and His name is the same.

Reporter: One often hears about the difference between Western and Eastern philosophy and religion. Why do you think that Hare Kṛṣṇa movement attracted so many followers in the West?

Reporter: How can Hare Kṛṣṇa help us solve our very difficult . . .

Prabhupāda: Because if you are purified . . . the whole difficulty is that we are not purified. We are impure. Impure means we are thinking in bodily concept of life. "I am Indian," "I am American," "I am Hindu," "I am Muslim," "I am Christian," "I am white," "I am black," these are all designation of the body. We have to transcend the position of the body:

We have to become nirmalam, purified pure soul. Ahaṁ brahmāsmi. This understanding, when I shall come to the stage, "I am pure soul, Brahman."

So if you become purified, you understand everything. Just like if you are in delirium out of strong fever, you cannot see things what they are, talk so many nonsense things. So similarly, we being enchanted by this material energy or this material body, we are identifying with this body and we are unhappy. As soon as we are purified—we understand that, "I am not this body; I am pure soul"—then my happiness is guaranteed.

Reporter: Can we reach this stage of purification?

Prabhupāda: Yes. So many are reaching. Why not? You see these American boys and European boys, they have reached purification. They are, from the very beginning of their life, they were meat-eaters and so many things. Illicit sex life, meat-eating, intoxication and gambling, they are daily affairs. But they have given up everything. Are they not purified? They are being purified from sinful activities, actually, simply by chanting this Hare Kṛṣṇa mantra. This is practical. Practical example. Thousands and thousands of boys and girls, they are becoming purified simply by following the rules and regulations.

So this is practical. If you do, you also become purified. Anyone will do. There is no question of "East" or "West," "Hindu," "Muslim." We have got students from all camps. The Africans, they are also dancing, chanting Hare Kṛṣṇa. We have got branches in Africa and Canada, in Europe, in America, in Australia. I am just coming from Australia. We have got two temples, one in Melbourne, one in Sydney, and just yesterday we established another temple, in New Zealand, Auckland.

So we have got ninety-five centers all over the world, and each center you will find not less than twenty-five, up to two hundred students like this, like Bhūrijana Prabhu. They are very happily living. Bhūrijana's wife, she was a very famous actress, but she has given up everything. Now she is chanting Hare Kṛṣṇa, you see. Thank you.

Prabhupāda: Come on. Who is Lalu?

Prabhupāda: So come on. You take. Take.