720509 - Letter to Bhavananda written from Honolulu 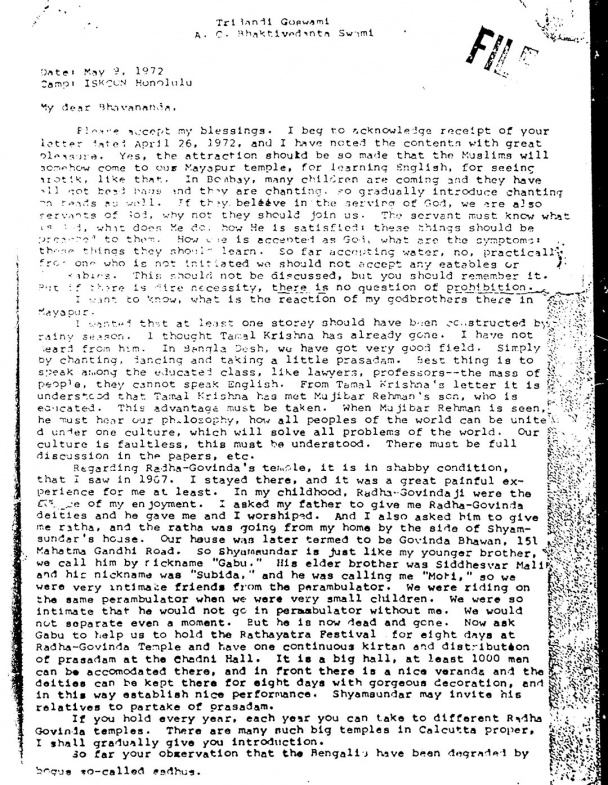 Letter to Bhavananda (Page 1 of 2) 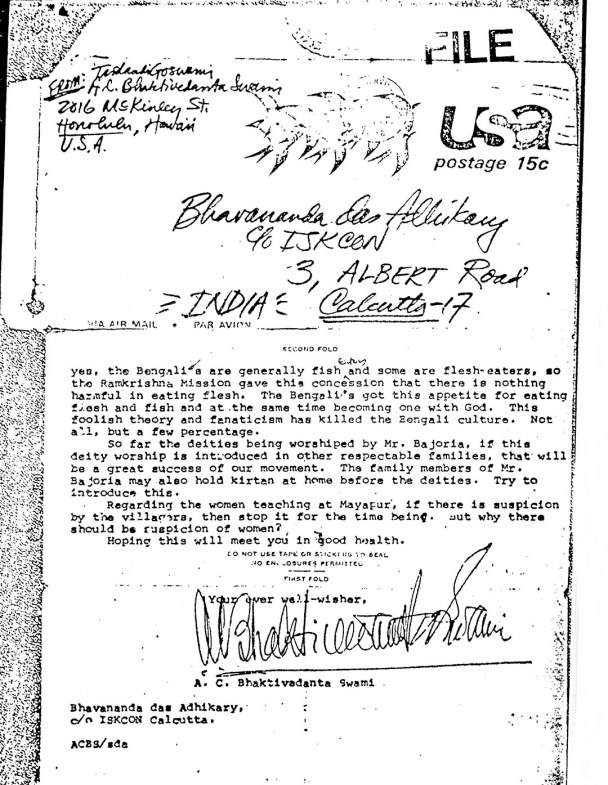 Letter to Bhavananda (Page 2 of 2)

Please accept my blessings. I beg to acknowledge receipt of your letter dated April 26, 1972, and I have noted the contents with great pleasure. Yes, the attraction should be so made that the Muslims will somehow come to our Mayapur temple, for learning English, for seeing arotik, like that. In Bombay, many children are coming and they have all got bead bags and they are chanting, so gradually introduce chanting on beads as well. If they believe in the serving of God, we are also servants of God, why not they should join us. The servant must know what is God, what does He do, how He is satisfied: these things should be preached to them. How one is accepted as God, what are the symptoms: these things they should learn. So far accepting water, no, practically from one who is not initiated we should not accept any eatables or drinkables. This should not be discussed, but you should remember it. But if there is dire necessity, there is no question of prohibition.
I want to know, what is the reaction of my godbrothers there in Mayapur.
I wanted that at least one story should have been constructed by rainy season. I thought Tamal Krishna has already gone. I have not heard from him. In Bangladesh, we have got very good field. Simply by chanting, dancing and taking a little prasadam. Best thing is to speak among the educated class, like lawyers, professors--the mass of people, they cannot speak English. From Tamal Krishna's letter it is understood that Tamal Krishna has met Mujibar Rehman's son, who is educated. This advantage must be taken. When Mujibar Rehman is seen, he must hear our philosophy, how all people of the world can be united under one culture, which will solve all problems of the world. Our culture is faultless, this must be understood. There must be full discussion in the papers, etc.
Regarding Radha-Govinda's temple, it is in shabby condition, that I saw in 1967. I stayed there, and it was a great painful experience for me at least. In my childhood, Radha-Govindaji were the source of my enjoyment. I asked my father to give me Radha-Govinda deities and he gave me and I worshiped. And I also asked him to give me ratha, and the ratha was going from my home by the side of Shyamsundar's house. Our house was later termed to be Govinda Bhawan, 151 Mahatma Gandhi Road. So Shyamsundar is just like my younger brother, we call him by nickname "Gabu." His elder brother was Siddhesvar Mali and his nickname was "Subida," an he was calling me "Moti," so we were very intimate friends from the perambulator. We were riding on the same perambulator when we were very small children. We were so intimate that he would not go in perambulator without me. We would not separate even a moment. But he is now dead and gone. Now ask Gabu to help us to hold the Rathayatra Festival for eight days at Radha-Govinda Temple and have one continuous kirtan and distribution of prasadam at the Chadni Hall. It is a big hall, at least 1000 men can be accommodated there, and in front there is a nice veranda and the deities can be kept there for eight days with gorgeous decoration, and in this way establish nice performance. Shyamsundar may invite his relatives to partake of prasadam.
If you hold every year, each year you can take to different Radha Govinda temples. There are many such temples in Calcutta proper, I shall gradually give you introduction.
So far your observation that the Bengalis have been degraded by bogus so-called sadhus, yes, the Bengali's are generally fish-eaters [handwritten] and some are flesh-eaters, so the Ramakrishna Mission gave this concession that there is nothing harmful in eating flesh. The Bengalis got this appetite for eating flesh and fish and at the same time becoming one with God. This foolish theory and fanaticism has killed the Bengali culture. Not all, but a few percentage.
So far the deities being worshiped by Mr. Bajoria, if this deity worship is introduced in other respectable families, that will be a great success of our movement. The family members of Mr. Bajoria may also hold kirtan at home before the deities. Try to introduce this.
Regarding the women teaching at Mayapur, if there is suspicion by the villagers, then stop it for the time being. But why there should be suspicion of women?
Hoping this will meet you in good health.