720509 - Letter to Rupanuga written from Honolulu 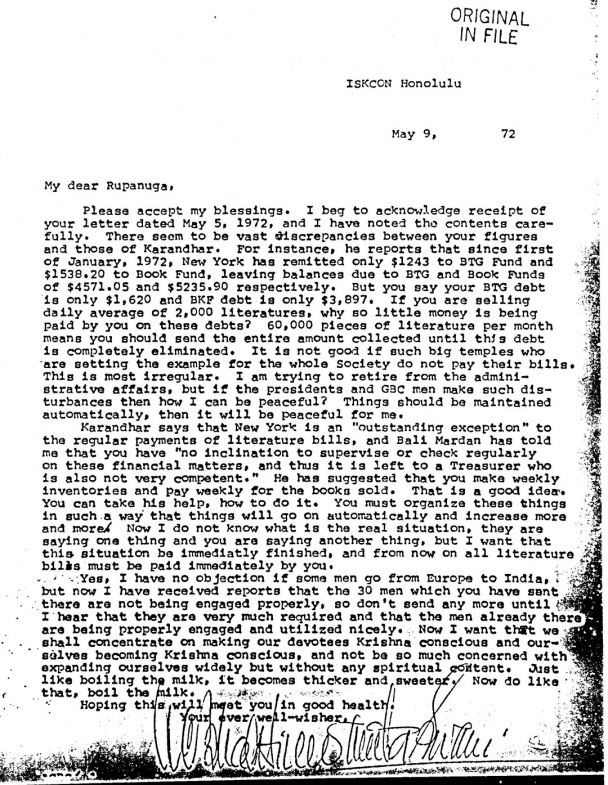 Please accept my blessings. I beg to acknowledge receipt of your letter dated May 5, 1972, and I have noted the contents carefully. There seem to be vast discrepancies between your figures and those of Karandhar. For instance, he reports that since first of January, 1972, New York has remitted only $1243 to BTG Fund and $1538.20 to Book Fund, leaving balances due to BTG and Book Funds of $4571.05 and $5235.90 respectively. But you say your BTG debt is only $1,620 and BKF debt is only $3,897. If you are selling daily average of 2,000 literatures, why so little money is being paid by you on these debts? 60,000 pieces of literature per month means you should send the entire amount collected until this debt is completely eliminated. It is not good if such big temples who are setting the example for the whole Society do not pay their bills. This is most irregular. I am trying to retire from the administrative affairs, but if the presidents and GBC men make such disturbances then how I can be peaceful? Things should be maintained automatically, then it will be peaceful for me.
Karandhar says that New York is an "outstanding exception" to the regular payments of literature bills, and Bali Mardan has told me that you have "no inclination to supervise or check regularly on these financial matters, and thus it is left to a Treasurer who is also not very competent." He has suggested that you make weekly inventories and pay weekly for the books sold. That is a good idea. You can take his help, how to do it. You must organize these things in such a way that things will go on automatically and increase more and more. Now I do not know what is the real situation, they are saying one thing and you are saying another thing, but I want that this situation be immediately finished, and from now on all literature bills must be paid immediately by you.
Yes, I have no objection if some men go from Europe to India, but now I have received reports that the 30 men which you have sent there are not being engaged properly, so don't send any more until I hear that they are very much required and that the men already there are being properly engaged and utilized nicely. Now I want that we shall concentrate on making our devotees Krishna conscious and ourselves becoming Krishna conscious, and not be so much concerned with expanding ourselves widely but without any spiritual content. Just like boiling the milk, it becomes thicker and sweeter. Now do like that, boil the milk.
Hoping this will meet you in good health.
Your ever well-wisher,