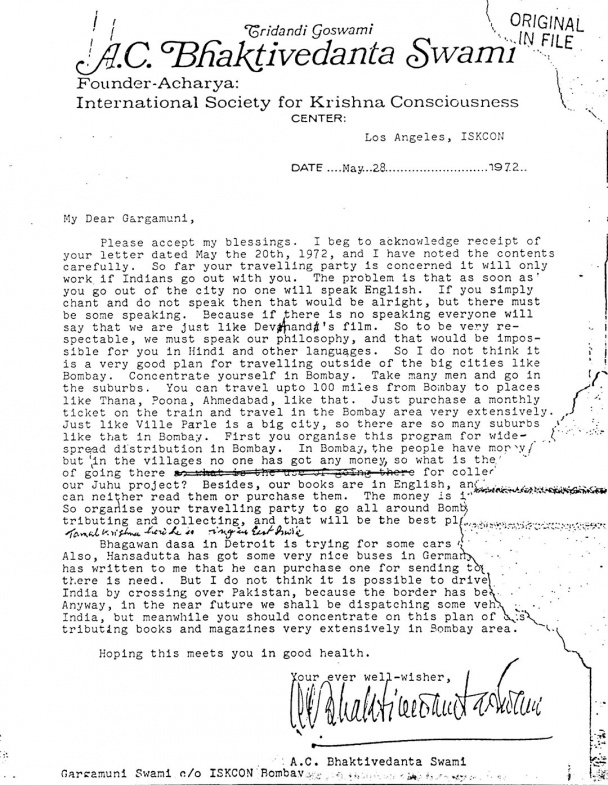 Please accept my blessings. I beg to acknowledge receipt of your letter dated May the 20th, 1972, and I have noted the contents carefully. So far your travelling party is concerned it will only work if Indians go out with you. The problem is that as soon as you go out of the city no one will speak English. If you simply chant and do not speak then that would be alright, but there must be some speaking. Because if there is no speaking everyone will say that we are just like Devanand's film. So to be very respectable, we must speak our philosophy, and that would be impossible for you in Hindi and other languages. So I do not think it is a very good plan for travelling outside of the big cities like Bombay. Concentrate yourself in Bombay. Take many men and go in the suburbs. You can travel up to 100 miles from Bombay to places like Thana, Poona, Ahmedabad, like that. Just purchase a monthly ticket on the train and travel in the Bombay area very extensively. Just like Ville Parle is a big city, so there are so many suburbs like that in Bombay. First you organize this program for widespread distribution in Bombay. In Bombay, the people have money but in the villages no one has got any money, so what is the ___ use of going there for collecting ____ for our Juhu project? Besides, our books are in English, and ____ they can neither read them or purchase them. The money is in ___. So organize your travelling party to go all around Bombay ___ distributing and collecting, and that will be the best place ___. Tamal Krishna how he is doing in East India. [handwritten]
Bhagawan dasa in Detroit is trying for some cars ___. Also, Hansadutta has got some very nice buses in Germany ___ has written to me that he can purchase one for sending to ___ there is need. But I do not think it is possible to drive ___ India by crossing over Pakistan, because the border has been ___. Anyway, in the near future we shall be dispatching some vehicle ___ India, but meanwhile you should concentrate on this plan of distributing books and magazines very extensively in Bombay area.