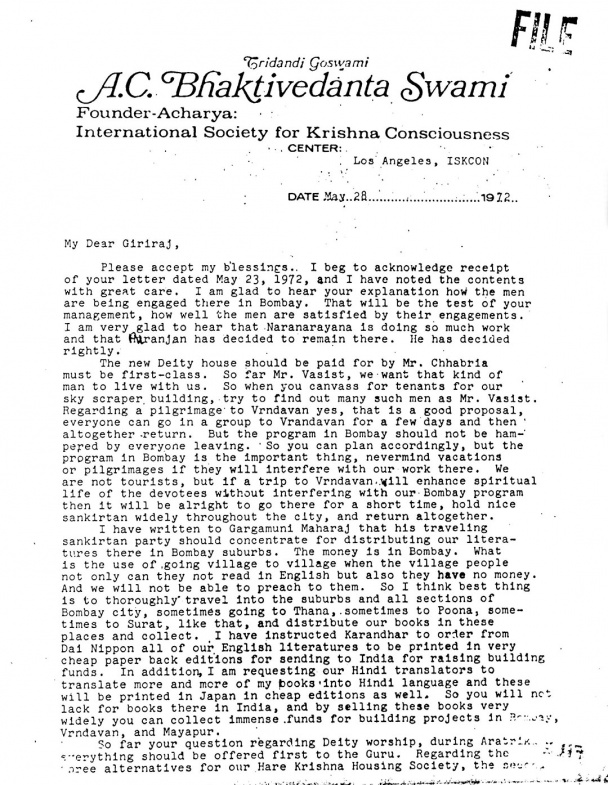 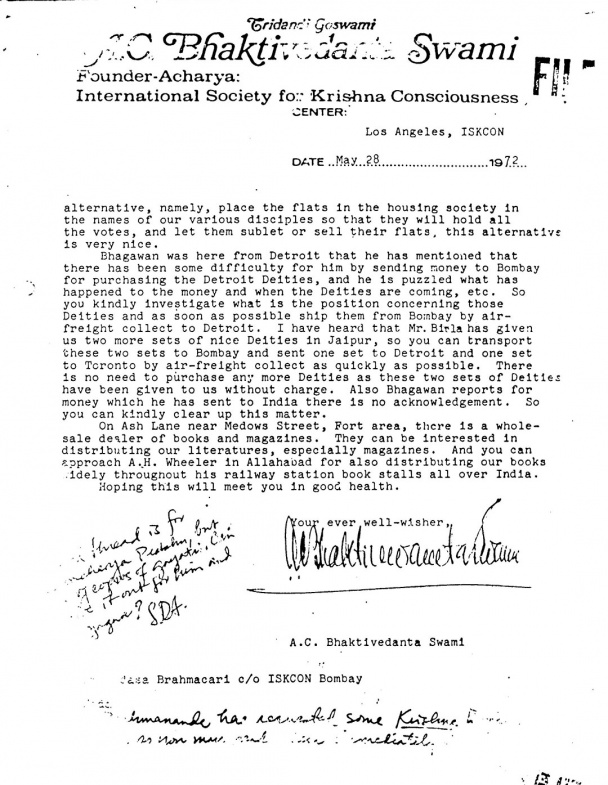 Please accept my blessings. I beg to acknowledge receipt of your letter dated May 23, 1972, and I have noted the contents with great care. I am glad to hear your explanation how the men are being engaged there in Bombay. That will be the test of your management, how well the men are satisfied by their engagements. I am very glad to hear that Naranarayana is doing so much work and that Puranjan has decided to remain there. He has decided rightly.
The new Deity house should be paid for by Mr. Chhabria must be first-class. So far Mr. Vasist, we want that kind of man to live with us. So when you canvass for tenants for our sky scraper building, try to find out many such men as Mr. Vasist. Regarding a pilgrimage to Vrndavan yes, that is a good proposal, everyone can go in a group to Vrndavan for a few days and then altogether return. But the program in Bombay should not be hampered by everyone leaving. So you can plan accordingly, but the program in Bombay is the important thing, never mind vacations or pilgrimages if they will interfere with our work there. We are not tourists, but if a trip to Vrndavan will enhance spiritual life of the devotees without interfering with our Bombay program then it will be alright to go there for a short time, hold nice sankirtan widely throughout the city, and return altogether.
I have written to Gargamuni Maharaj that his traveling sankirtan party should concentrate for distributing our literatures there in Bombay suburbs. The money is in Bombay. What is the use of going village to village when the village people not only can they not read in English but also they have no money. And we will not be able to preach to them. So I think best thing is to thoroughly travel into the suburbs and all sections of Bombay city, sometimes going to Thana, sometimes to Poona, sometimes to Surat, like that, and distribute our books in these places and collect. I have instructed Karandhar to order from Dai Nippon all of our English literatures to be printed in very cheap paper back editions for sending to India for raising building funds. In addition, I am requesting our Hindi translators to translate more and more of my books into Hindi language and these will be printed in Japan in cheap editions as well. So you will not lack for books there in India, and by selling these books very widely you can collect immense funds for building projects in Bombay, Vrndavan, and Mayapur.
So far your question regarding Deity worship, during Aratik everything should be offered first to the Guru. Regarding the three alternatives for our Hare Krishna Housing Society, the alternative, namely, place the flats in the housing society in the names of our various disciples so that they will hold all the votes, and let them sublet or sell their flats, this alternative is very nice.
Bhagawan was here from Detroit that he has mentioned that there has been some difficulty for him by sending money to Bombay for purchasing the Detroit Deities, and he is puzzled what has happened to the money and when the Deities are coming, etc. So you kindly investigate what is the position concerning those Deities and as soon as possible ship them from Bombay by air-freight collect to Detroit. I have heard that Mr. Birla has given us two more sets of nice Deities in Jaipur, so you can transport these two sets to Bombay and sent one set to Detroit and one set to Toronto by air-freight collect as quickly as possible. There is no need to purchase any more Deities as these two sets of Deities have been given to us without charge. Also Bhagawan reports for money which he has sent to India there is no acknowledgement. So you can kindly clear up this matter.
On Ash lane near Meadows Street, Fort area, there is a wholesale dealer of books and magazines. They can be interested in distributing our literatures, especially magazines. And you can approach A.H. Wheeler in Allahabad for also distributing our books widely throughout his railway station book stalls all over India.
Hoping this will meet you in good health.

n.b. Brahmananda has requested some Krishna [unclear] Books from you, so you may send them immediately with bill. [handwritten]