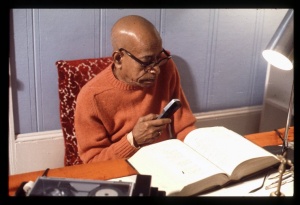 Prabhupāda: But why this question is not raised? In each factory so much chemical was manufactured. What is the factory?

Prabhupāda: Millions of tons of.

Svarūpa Dāmodara: The factory of Nestlé.

Prabhupāda: So, what is that nature? That is the question it is there to utilise nature's energy but what is this nature?

Svarūpa Dāmodara: According to cosmologists the first element created was hydrogen.

Prabhupāda: So who created? (laughs) that is the question.

Svarūpa Dāmodara: There are.

Prabhupāda: As soon as you say created, who created? Where created? How created? These questions there are . . . that who created the chemicals in the factory?

Prabhupāda: So my question in whose factory hydrogen was . . . eh?

Karāndhara: Sometimes say the . . . (indistinct) . . . each elements in the universe

Prabhupāda: All right then but why do you say creation?

Svarūpa Dāmodara: Hydrogen itself contains two fundamental particles one called electron and one called proton. So these two fundamental particles they are balanced within the atom which are the creation itself. The hydrogen atom is the simplest of all the atoms and from hydrogen everything comes out. All the elements like gold, platinum and all the elements, ninety-two elements come out from hydrogen. That's their theory.

And then when these elements like gold and platinum all these metals are heated at a very high temperature they again become hydrogen. So the balance is going on between hydrogen and all the other atoms, equilibrium. And it is controlled only by temperature and the pressure.

Prabhupāda: So if they actually say temperature there is the question of fire and electricity.

Prabhupāda: So where is the powerhouse where the electricity is being produced?

Svarūpa Dāmodara: It goes in the . . . (indistinct)

Svarūpa Dāmodara: (indistinct) . . . of the transcendental body of Govinda.

Karāndhara: What do they say about so far about the atomic particle? Atomic particles they say there is a theory of conservation of energy?

Karāndhara: What do they say, that the base energy of the universe has always been here?

Svarūpa Dāmodara: The energy, the energy?

Prabhupāda: As soon as they say energy it must be the source of energy.

Karāndhara: What is the answer they give . . . (indistinct)

Prabhupāda: You don’t find here any energy without any source. Electric energy there is electric powerhouse and in the powerhouse there is the engineer who is manipulating different machines giving power. That is our experience. If you say it is always existing then why do you create?

Prabhupāda: Change means there is brain there is engineers, manipulator. Then . . . (indistinct) . . . will change?

Prabhupāda: So how it existed because in our experience we see that any energy is coming from a source.

Prabhupāda: So what is that source?

Karāndhara: That, that experience is just relative experience.

Karāndhara: They say the absolute is just an infinity of existence of that energy.

Prabhupāda: That's all right but so many, what's it called? Permutations?

Prabhupāda: Yes they are going on so there must be some brain. Just like the scientists are now trying to utilise the Sun energy for producing power energy.

Svarūpa Dāmodara: First principle of conservation of energy is that energy cannot be created nor destroyed . . .

Svarūpa Dāmodara: So it must be existing.

Prabhupāda: Yes, existing but it is being manipulated, everything is existing.

Prabhupāda: But just like when we cook something everything is there in the kitchen but somebody goes and manipulates and then nice foodstuff comes out.

Svarūpa Dāmodara: So there has to be an operator.

Karāndhara: They are thinking that operator is not necessarily a person or in control of, it's simply a set of laws.

Prabhupāda: No, you cannot say that because as soon as you say operator it is a person. Must be person. Because it is systematic without brain without person how things can be done machine is operating but it is systematic. Such a big ocean we are in front why waves . . . (indistinct) . . . a small bird in front but because he is confident in the system he is facing. That is the system otherwise in a second the vast ocean can create catastrophe.

Karāndhara: But that system is too involved and too many permutations to be in charge of.

Karāndhara: That system you said is regulated in various ways.

Devotee: It's too great for any person to be in charge of.

Devotee: That they cannot imagine.

Prabhupāda: That is their less intelligence because as soon as there is something operation systematic there is a person behind it. The government, the United States government to the lay man it is impersonal but to the man who knows things the ultimate person is the president.

Svarūpa Dāmodara: If there be no perfect brain.

Svarūpa Dāmodara: If there be no perfect brain.

Svarūpa Dāmodara: It, it would be random.

Karāndhara: When we tell them that all this is under the order of a person they think we are simpletons.

Svarūpa Dāmodara: What is that?

Karāndhara: Just like they say a child thinks his father is a controller or president that's simply because he simpleminded. He doesn’t know that his father is not in so much control.

Prabhupāda: But simpleminded, you are high-minded have you seen any child dropping from the sky? Do you think that a child he has dropped from the sky, there is no need of father and mother. Where is that instance?

Karāndhara: Well they are working on that.

Prabhupāda: Just see the rascal. (laughs) just like there was a meetings it is a criticism to the East Bengal men. There is a farce comedy drama, the subject matter of this drama is that the woman are trying to become free, free. So the women are meeting together that we have solved all the question how to become free from this man's hand.

So the only difficulty is that still we have to beget children. Pregnancy is not there. So one rascal . . . (indistinct) . . . "Yes we are making research in future man will produce, I assure you." It is like that. In future man a male will produce child not the . . . (indistinct) . . . we are making research. The your statement.

Karāndhara: They are actually doing that now, so some day.

Prabhupāda: Yes that means. That proves that he is a rascal number one. As soon as he says yes we are doing that that means he proves himself to be a rascal.

Svarūpa Dāmodara: That is something, they are trying to be impossible now. It's not possible.

Prabhupāda: But this impossibility is made possible by God just like Viṣṇu, Garbhodakaśāyī Viṣṇu produced a child from the naval, Brahmā. Although his wife Lakṣmī Goddess of Fortune was there He did not take the help of the wife to produce Brahmā. He produced Himself and that, that . . . (indistinct) . . . there not by others.

Devotee: Therefore he is called Urukrama

Prabhupāda: Eh? Urukrama thank-you, yes. As soon as impossibility becomes possible then he becomes God. (break) and . . . (indistinct) . . . (break) actually we should fast up to 12 o’clock and then we take Ekādaśī feast.

Karāndhara: (indistinct) . . . breakfast fruits and I was thinking of tomorrow also we fast. If we fast in the morning we tend to not attend kīrtan.

Devotee: I don’t know unless they can pick up small particles out of the sand . . . (indistinct)

Svarūpa Dāmodara: Because the full moon is closing.

Karāndhara: Sometimes some will say there is no source.

Karāndhara: But they, that's all relative. All the energy.

Karāndhara: But to be absolute is the infinity of relativity.

Prabhupāda: That's all right but you’re not absolute that is the point. You are relative.

Karāndhara: But they say relativity goes to infinity that's what absolute is.

Prabhupāda: No relative is part of the absolute, that we admit but we are also creating so many things. We can create this roads and the cars like that but not a planet or universe that is not possible. You can create, imitate because we are part of the absolute we have got the qualities but you are not absolute.

Svarūpa Dāmodara: I think it is absolute in the.

Svarūpa Dāmodara: Nothing is absolute in the material sense.

Karāndhara: Therefore they say that nothing is created because everything is already there.

Prabhupāda: Already there but you are taking advantage of it otherwise you don’t create let everything is already there. Don’t try to create. Why you are trying to create? The process is there just like a man having sex with a woman and a child is created. Everything is there you do not know how the child is formed, how the child is there within the womb you do not know but this process has been accepted. The woman and man must unite otherwise there will be no child. So you are not creating but you are, it is called immediate cause. There are two causes of creation, there are five causes out of which the cause which is known as daiva providential that is very important. Hari-nāma, hari-nāma. (japa)

You have created this motor car but it is dependent on petrol that was not created by you. The conclusion is that therefore we are not independent.

Prabhupāda: What do you say? Svarūpa Dāmodara?

Svarūpa Dāmodara: Yes we are not independent we are dependent on the supreme power.

Svarūpa Dāmodara: We are parts and parcels of the.

Svarūpa Dāmodara: We are all parts and parcels of the supreme.

Prabhupāda: Sounds are already there in the nature.

Prabhupāda: Yes and that you can learn from the animals, different animals have got different vowels.