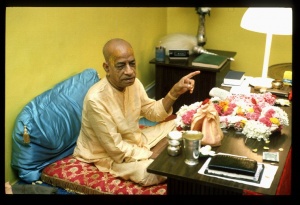 Prabhupāda: (sings of Jaya Rādhā-Mādhava) (prema-dhvani) Thank you very much.

Translation: "In the twelfth incarnation, the Lord appeared as Dhanvantari, and in the thirteenth He allured the atheists by the charming beauty of a woman and gave nectar to the demigods to drink."

Prabhupāda: This is very interesting verse. (laughs) (laughter) To have very charming wife is not very good. (chuckles) And in your country you have got all charming wives. Cāṇakya Paṇḍita says that there are four kinds of enemies in family life. These are very experienced version. He says, mātā śatru. In family means we live with father, mother, wife, children.

This is family. In your country family does not mean father-mother, only wife and children. But in our country, according to Vedic civilization, family is a large conception: father, mother, brother, sister, sister's son, brother's son. If there are difficulty, one has to . . . (indistinct) . . . so on the whole, father, mother, wife and children, consisting of, family.

Now Cāṇakya Paṇḍita says: "In the family there are enemies." How? Ṛṇa-kartā pitā śatruḥ. Cāṇakya Paṇḍita said: "A father who is a great debtor, he is enemy." Because the son inherits the money of the father, similarly, the law is that if the father dies a debtor, the son becomes responsible to pay the debts. That is the law, Manu-saṁhitā. I do not know what is the law here. I don't think the son is responsible for paying the debts of father, but in India that is the law.

One big barrister, Mr. C. R. Das, his father died insolvent, making debts. So when he became very rich, he called all the creditors and paid five to five, that "My father was debtor. You take this money." That is obligation. Therefore Cāṇakya Paṇḍita says: "The father who dies a debtor, he is an enemy." Ṛṇa-kartā pitā śatruḥ. Ṛṇa means debts; kartā means one who has committed so many debts and dies. A father . . . instead of enjoying father's property, he has to pay the father's debts.

Because in India, at that time it was allowed, a man can marry more than one wife. Now the law is there. So my father, he was a saintly person. So he called me one day and said: "My dear boy, you are trying to marry again. I request you, don't do that. You do not like your wife. That is a great fortune for you." (laughter) So I gave up that idea of marrying. Yes.

Therefore it is said that anyān . . . apāyayat surān anyān mohinyā mohayan striyā. Those who are sura, demigods, they were given the nectar, and others . . . others means opposite number of surān, or asurān, the atheist or the demons. They were enchanted by the beautiful form of Mohinī. Kṛṣṇa's another incarnation is female, Mohinī, charming—so much charming that even Lord Śiva was after the girl.

Lord Śiva, he is supposed to be dhīra, but he became charmed, and he was after that girl. So when Kṛṣṇa . . . Kṛṣṇa is already beautiful, but when He takes the shape of an woman, how beautiful He became we can just imagine. Woman are naturally beautiful. They are called "fair sex." So mohinyā . . .

So all the devotees, they offered their obeisances, because Mohinī-mūrti means God's incarnation. So "My dear Lord, Your this mūrti, this form, this charming form, is somewhere rākṣasīni." Rākṣasīni means, what is called, witches? Or the female demon. "And somewhere You are goddess of fortune."

That is the purpose of becoming householder. Gṛhastha-āśrama. Not that I become attracted by wife and I become absorbed in simply sex relation and forget my real duty, Kṛṣṇa consciousness. That is dangerous. So generally, if one's wife becomes very beautiful, he forgets his real duty, Kṛṣṇa consciousness, and he simply becomes a pet servant of the wife. That is the . . .

Therefore Rūpa Gosvāmī says, anāsaktasya viṣayān yathārham upayuñjataḥ (Brs 1.2.255). One should not be attracted for sex life. Yathārham upayuñjataḥ. But does it mean that husband will not have sex? No. Yathārham: as it is required. As it required means sex life with wife should be performed only for begetting a Kṛṣṇa conscious child. Nothing more. No more attraction. That life is better. That life means not only better; that is the ideal life. Wife and husband, combination, both should make progress in Kṛṣṇa consciousness.

Woman, they are generally equipped with the qualities of passion and ignorance. And man also may be, but man can be elevated to the platform of goodness. Woman cannot be. Woman cannot be. Therefore if the husband is nice and the woman follows—woman becomes faithful and chaste to the husband—then their both life becomes successful. There are three qualities of nature: sattva, raja, tama. So rajas-tama, generally, that is the quality of woman. And man can become to the platform of goodness. Therefore initiation, brahminical symbolic representation, is given to the man, not to the woman. This is the theory.

So those who are not demigods . . . here it is said, apāyayat surān. Sura-asura. Sura, those who are not developed to Kṛṣṇa consciousness, they are asura. So every husband should be a sura. Sura means devotee. And every woman should be religious. Religious means to become chaste, faithful to the husband. And the husband should become a devotee. Then both of them will make progress in Kṛṣṇa consciousness, and that is the perfection of life.

So here it is very clearly described that anyān mohinyā. Mohinī, mohinyām, striyā, by the formation. So we should not be attracted. But generally, people are attracted. The whole world, the material world, is going on that the woman is attractive for man and the man is attractive for woman. Puṁsaḥ striyā mithunī-bhāvam etam. This is the general platform of attraction between man and woman. And when they are united by such attraction, then they become more materially knotted. And then they are after . . .

Our material bondage is due to an illusion. What is that illusion? That, "I am this body." Dehātma-buddhi. "I am this body, and anything which is required for this body or which I possess for the comfort of this body, that is mine." Both of them are illusion, because I am not this body; I am soul, ahaṁ brahmāsmi.

But the illusion is everyone is thinking, "I am this body." "I am Indian," "I am American," "I am white," "I am black," "I am brahmin," "I am śūdra," "I am this," "I am that." So this is illusion. Therefore the Vedic system is, to save one from this illusion, the first stage of life is brahmacārī, to understand the value of life and strictly without any association with woman. That is called brahmacārī. Strictly.

So the whole Vedic system is to convince one that "You are not this body, and anything you possess in relationship with your body, they are all illusion. You are spirit soul, part and parcel of God, Kṛṣṇa. Therefore your duty is some way or other, come out of this entanglement of the bodily concept of life and bodily possession. Come out. Be free. Brahmā-bhūta (SB 4.30.20). Now your position is jīva-bhūta." Jīva-bhūta means you are thinking that "I am a product of this material world." All scientists, all philosophers, they are the same concept that, "I am this body. Beyond this body there is nothing." All big, big professors, scientists, that "After this body is finished, everything is finished."

But actually, that is not a fact. From Bhagavad-gītā you understand that na jāyate na mriyate. The spirit soul is never born, never dies. It is the body, material body, that takes birth and dies. But spirit soul remains. Dehāntara-prāptiḥ. Tathā dehāntara-prāptiḥ (BG 2.13). He transmigrates to another body, just like we are transmigrating from one body to another.

There are so many children here. Now they are doing so many things foolish, but we enjoy, because we know that this body is foolish body. Nobody grudges if a child does something which not to be done. Just like most children, they are chewing their thumb, but if you do that, that cannot be allowed—because your body is different, and his body is different.

So these rascals, they do not understand the simple truth, that this body is different from my . . . from the body of a youth or a boy. They are different bodies. They are thinking the body is growing. The body's not growing; body is changing. Just like in cinema, photograph, you see somebody is moving, but that is not moving. That is different body changing, the photographs. But because it is shown so swiftly, we see that one body. As soon as the machine is stopped, the body is stopped. Immediately. We have experience.

So these bodies are different bodies. Otherwise, a child does so many things foolishly, and the elderly boy or a youth, he does not do so. Because the body is different. Why do they not understand? This is called ignorance. The body is different. Similarly, as everyone has got past, present and future . . . you are all young men. You had your past. You had a child's body or boy's body. In future you will get a body like me, aged. Similarly, I had my past. I was . . . I had a youth's body. Now I have got aged body. Then why not future, another body? This is very common conclusion.

So every one of us, spirit soul, part and parcel of God. Now we are embarrassed due to our ignorance. So when this ignorance is moved, we become enlightened, that is called brahma-bhūta, self-realization, spiritual realization.

So without being brahma-bhūta that, "I am spirit soul," Kṛṣṇa consciousness does not become very perfect. If we are in the bodily concept of life, then it is rather difficult. It will take time. Because unless you come to the platform to understand that you are not this body, you are spirit soul, the actual devotional service does not begin.

But to the neophyte student, the chance is given to develop this devotional service: śravaṇaṁ kīrtanaṁ smaraṇam arcanaṁ vandanaṁ dāsyam (SB 7.5.23). The method is by constantly being engaged in devotional service, one becomes realized soul. God helps him, Kṛṣṇa helps him. Then he becomes a perfect, liberated soul.

So first of all, to realize that, "I am not this body," and the next stage is that, "I am spirit soul, part and parcel of Kṛṣṇa. Therefore as part and parcel is meant for giving service to the whole, therefore my constitutional position is to serve Kṛṣṇa." That is perfection of life.