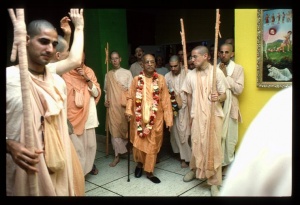 Prabhupāda: Ladies and gentlemen, I thank you very much for your coming here to participate in this Kṛṣṇa consciousness movement. We are calling everyone to go back to home, back to Godhead. This is our movement, Kṛṣṇa consciousness movement. Just now we described the place where we intend to go. That is Goloka Vṛndāvana. There the Supreme Personality of Godhead is residing with His consort, Rādhārāṇī. Rādhā-Mādhava. Kṛṣṇa is the husband—not exactly husband, but friend. The same mellow. As you try to enjoy here, boy and girlfriend, not married, but an extra ecstasy without being married, conjugal love, the ideal conjugal love is there, Kṛṣṇa and Rādhā.

Here the same thing is present, but in a perverted sense. The origin is there. Jaya rādhā-mādhava kuñja-vihārī. Rādhā and Kṛṣṇa, They are always engaged in loving affairs in the kuñja, in the bushes of Vṛndāvana. Jaya rādhā-mādhava kuñja-vihārī. Gopījana-vallabha: He is very dear to the gopīs and the gopas. Gopas means the cowherd men and the cowherd boys. So Vṛndāvana is village life. It is not a town like Los Angeles. It is village. It is village, and they are always taking pleasure on the bank of Yamunā. Yamunā-tīra-vana-cārī. And there are very nice gardens on the bank of the Yamunā.

And whenever there is some danger . . . of course, in the original Vṛndāvana there is no question of danger. It is blissful, transcendental abode. But when Kṛṣṇa comes down to show us the replica of the original Vṛndāvana . . . that Vṛndāvana is there on this planet in India, about ninety miles from New Delhi. It is exactly the same Vṛndāvana, but because it is on this material world, it appears that there is sometimes danger. So when Kṛṣṇa was present on this earth, on this planet, so there was some danger. Actually there was no danger, because Kṛṣṇa was present. But it appeared like that.

Immediately lifted the big mountain as umbrella like this. So when Kṛṣṇa was present, although He was playing like an ordinary human child or human being, still, when there was need, He manifested His godly power. That is God. When it was needed to protect the inhabitants of Vṛndāvana, He lifted a big hill, and since then His name is Giri-vara-dhārī. Giri-vara-dhārī means that hill, and He sustained that hill. He was at that time seven years old from material calculation.

But in the original Vṛndāvana there is no such thing as the wrath of Indra, the king of heaven, and danger or torrents of rain overflood, inundation. There is no such thing. There everything is blissful, transcendental and eternal. Here we have got a little sample, because whatever you have got in this material world, that is simply imitation, a shadow of the original. Sometimes . . .

You can understand that on the desert sometimes it appears there is a vast ocean of water, mirage. But actually there is no water. Those who are animals, they sometimes are misled. They are thirsty, and they think that there is water in the desert, and they run over, but actually there is no water. The animal runs, and the water also advances. In this way, when he becomes too much fatigued, he dies.

This is the exact example of this material world. We are hankering after water, we are thirsty, and we are being misled by so-called water, mirage. Just like while I was coming here, both sides, the manifestation of material civilization, electrical wire, pumping station of oil, big, big motorcars, light, motel, hotel and so many things . . . so we are thinking that these things will give us relief—our thirst will be quenched, our hankering for water will be satisfied. But it has failed. In your country especially—not in your country, in all countries—so many young flowers of your country, they are frustrated. That's a fact.

(aside) What is that sound?

They are frustrated. That is a fact. You know, I know.

God has got many energies. Parāsya śaktir vividhaiva śrūyate (Śvetāśvatara Upaniṣad 6.8, CC Madhya 13.65, purport). In the Vedas we understand that the Supreme Lord has manifold energies, and whatever we see, that is the activities of His energy. Just like electric energy: the energy is coming out from the powerhouse, and by utilizing that electric energy, we are working in so many ways: heater, cooler, this microphone, tape recorder, so many things. But the energy is coming from that powerhouse.

This is called inconceivable one and difference simultaneously. Acintya-bhedābheda tattva. This is our philosophy. Nothing is different from God, but not that everything is God. Simultaneous one and different. So two energies are working, material and spiritual. The spiritual energy is called superior, and the material energy is called inferior. Just like matter. Material energy means earth, water, fire, air, ether, mind, intelligence, ego, and spiritual energy means spiritual force, the living force.

Why this developed consciousness of life is given by God? To understand God. This is the only business. This developed consciousness of life is being misused in the matter of animal life. The modern scientific advancement or philosophical speculation, they are trying to adjust how we can enjoy our sense life better. But after all, it is sense life. Better or inferior, there is no such question. Suppose a glass of water, given in golden glass tumbler or in earthen tumbler, the taste of the water is the same. Similarly, the taste of life is eating, sleeping, sex life and defense.

Suppose I have come here in Laguna Beach by nice . . . on a nice motorcar. So it is a pot only, that's all. I could come here walking or in another vehicle. So there was no difference. It would have taken little more time. But we are thinking, because we have got this motorcar instead of a bullock cart, we are advanced in civilization. That is the mistake. Because either you travel on a bullock cart or in a motorcar, your business is to transport from one place to another, that's all. It may save some time. You may feel some extra pleasure. No pleasure actually. Rather, bullock cart is comfortable because this motorcar, you are always thinking, "There may not be any accident." Yes. Always they are afraid. And there is happening accident. Recently one of our devotee has died. So many people are dying.

(aside) What is the statistics in your country? How many people are dying?

Prabhupāda: Sixty thousand a year. So in this way you cannot be happy. Because the more you advance in material civilization, the more you become complicated. The real purpose is to go back to home, back to Godhead. We are missing the point. There is no guarantee. We have been given this chance of human form of body by nature's way, by the evolutionary process, coming through, transmigrating through 8,400,000 species of life. We have got this human form of life, developed consciousness, to understand God, not increasing the comfort from bullock cart to motorcar. No. Not for this purpose.

The so-called scientist, they are thinking that we are advancing in civilization from the primitive form, transport by bullock cart to motorcar. But that is not actually advancement. We are missing the point that this human form of life was meant for realizing God, realizing self. But we are misusing that higher intelligence and consciousness for manufacturing motorcar. And they are very much proud of advancement.

All these materialistic leaders, the politicians, the scientists, the philosophers, the technologists and so on, businessmen, so on, so on, and all these material—they are all blind, and they are leading other blind. So what will be? The result will be catastrophe, because both of them are blind. If one man is with eyes, he can lead another thousands of men, blind men: "Please come. I shall help you crossing the road." But if the leader is also blind and the followers are blind, then what is the result?

That is happening. They are thinking that, "By bodily comfort, by sense gratification, we shall be happy." But that is not possible. They are . . . we do not know. Actually we have no knowledge. Dehāntaraṁ-prāptiḥ. In the Bhagavad-gītā it is said:

You, me—every one of us—is encaged within this body. I am spirit soul; you are spirit soul. That is the Vedic injunction. Ahaṁ brahmāsmi: "I am Brahman." That means spirit. Not Para-brahman. Don't mistake. Para-brahman is God. We are Brahman, part and parcel of God, fragments, but not the Supreme. Supreme is different.

Just like you are American, but the supreme American is your president, Mr. Nixon. But you cannot say that, "Because I am American, therefore I am Mr. Nixon." That you cannot say. Similarly, you, me, every one of us, Brahman, but that does not mean we are Para-brahman. Para-brahman is Kṛṣṇa. Īśvaraḥ paramaḥ kṛṣṇaḥ (Bs. 5.1). Īśvaraḥ paramaḥ. Īśvara means controller. So every one of us is controller to some extent. Somebody is controlling his family, controlling his office, business, controlling his disciples. At last, he is controlling a dog. If he hasn't got to control anything, he keeps a dog to control, (laughter) a pet dog, a pet cat.

So you can try to read our literatures. We have got many books. You can come and see practically how our students are doing, advancing in Kṛṣṇa consciousness movement. You can try to learn from them by association. Just like if one wants to become a mechanical man, he enters into a factory and associates with the worker, mechanics, and gradually he also becomes a mechanic, a technologist. Similarly, we are opening these centers just to give opportunity to everyone to learn how to go home, how to go home, back . . . how to go home, back to Godhead. That is our mission.

So our method is very simple. We don't manufacture any new method. Why new method? The old method is very perfect, authorized, accepted by great ācāryas. And they are, actually, are benefited. So why we shall manufacture? What is my brain? I am a teeny. We haven't got to manufacture, neither we can manufacture anything perfect, because I am imperfect. We can simply catch up the perfect things. Then we become perfect. That is our process.

So Kṛṣṇa, the supreme perfect, His teachings are there in the Bhagavad-gītā As It Is. We are taking, accepting that. And we are preaching the same philosophy throughout the world, and they are accepting it, and I wish all of you who are present here will kindly accept this philosophy and make your life successful.