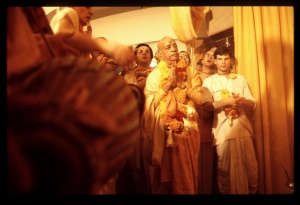 Svarūpa Dāmodara: Yes. He told me he was very pleased to see Śrīla Prabhupāda, and he said he will start chanting Hare Kṛṣṇa.

Jayatīrtha: He told me that he could see that this knowledge wasn't theoretical, that it was realized knowledge.

Jayatīrtha: He told me that.

Jayatīrtha: That the knowledge that you have isn't theoretical but it's realized. He was very much impressed by that.

Svarūpa Dāmodara: He liked the prasādam so much that I made another plate, and he finished that. Then after that he took the . . . he finished the . . . what is that preparation from eggplant?

Devotee (2): The vegetable. He really liked that.

Svarūpa Dāmodara: Yes, he finished all plate, he liked so much. He said: "What is here Prabhupāda?"

Prabhupāda: Gradually try to convince him, and let him read our books.

Prabhupāda: That requires your knowledge.

Svarūpa Dāmodara: But he agreed the existence of supreme brain. We were talking about the talk between Einstein, Heisenberg, and some of the famous so-called physicists in nuclear field. So there was a conversation between Einstein and this Heisenberg, and Paul Dirac, and Wolfgang(?), these are mostly . . . (indistinct) . . . scientists, they are mostly Nobel Laureates.

They were discussing, and without Einstein, these people they were talking, "Why Einstein is all the time talking about God?" Then this Heisenberg, he was not like Einstein. Einstein himself, he believed that there is a brain behind, supreme brain of God. And some of them, specifically this one, young . . . (indistinct) . . . Dirac, he is also a scientist, he was very young, he was only twenty-five years old. So he said, "Einstein is all the time talking about God." This Dirac is completely opposite to this Einstein. So they were discussing about why Einstein is thinking about God all the time. And so . . .

But ultimately they said . . . most of them agreed that there is a supreme being who is making all these physical laws, natural laws. It's already in the universe, but they are trying to discover it. So most of them agree except this Dirac. So in the same line . . . (indistinct) . . . told me that, "Yes, we agree that all the physical laws is already there. If somebody doesn't make it, then how can it exist?" So he said he is thinking also in that line, that there is someone, some brain, some supreme brain who is making all these physical laws. Otherwise there cannot be physical laws if there is not someone. He was saying that he started thinking in that line too.

Prabhupāda: (indistinct) . . . sṛjate tat. He makes everything, but He is not attached. (pause) (break)

If they find that you are qualified for the post, so you are selected as a professor. It's like that in the spiritual field also. There are revealed scriptures, and there everything is written what will be the qualification of a guru and then how to choose a bona fide one. So everything is written. You should follow the injunctions of the revealed scriptures accordingly.

Prabhupāda: Committee is his spiritual master, he orders that you do this.

Jayatīrtha: The test is to see how much one is actually following the orders of his spiritual master.

Rāmeśvara: Listening to another so-called guru, everywhere we go, especially in Los Angeles, they always talk of other gurus. They always talk of spiritual knowledge, but they don't find out what the real test is.

Prabhupāda: What is your answer?

Rāmeśvara: So we show them our books and say that these are the real scriptures, real quality. The science has to be . . . (indistinct) . . . authorities of spiritual life.

Rāmeśvara: Prabhupāda, when you say that this is the knowledge that's been realized . . .

Jayatīrtha: It's difficult to . . . (indistinct) . . . detached from material things. One should be attached to Kṛṣṇa.

Prabhupāda: What is the symptom of guru you do not know. Then how you can . . . (indistinct)

Devotee (2): The devotee is always offering devotional service to the Supreme Personality.

Prabhupāda: Yes, that is first step. Without . . . (indistinct) . . . simply by knowledge . . . knowledge you must have, but simply theoretical knowledge . . . practical manifestation that he's a great devotee. Whenever there is any doubt or question, he will prove by the evidences of śāstra.

Jayatīrtha: So in this way, the spiritual master and Kṛṣṇa are in complete agreement.

Rāmeśvara: The other teachers, they don't talk . . .

Rāmeśvara: Our calendar says Tuesday. It's obvious when they talk about their teachers that they never talk of service to Kṛṣṇa.

Prabhupāda: Therefore they have no realization. Our relationship is service. So one who is not engaged in the service of the Supreme, he has no realization. Whatever little realization he has got, that is called śānta-rasa.

Rāmeśvara: There's nothing practical that they say.

Rāmeśvara: They say nothing practical.

Rāmeśvara: In class we have, every evening.

Prabhupāda: So in the Tenth Chapter it is said, teṣāṁ satata-yuktānāṁ bhajatāṁ prīti-pūrvakam (BG 10.10). Do you know this verse? Then? Bhajatāṁ prīti-pūrvakam: "One who is engaged in devotional service with love and faith," buddhi-yogaṁ dadāmi, "I give him intelligence."

That is perfection. Satata-yuktānām, "Twenty-four hours engaged with love and faith in My service, I give him intelligence, not to others." That is the qualification. Buddhi-yogaṁ dadāmi te yena mām upayānti. What kind of intelligence? By which one can come back to home, back to Godhead.

Not for material enjoyment, or bluffing or cheating. Not that intelligence. That intelligence also given by Him, indirectly. "If you want to cheat, all right, I will give you how to cheat others." That is material. In the material world, we can cheat. In the spiritual world, there is no question of cheating.

Jayatīrtha: The intelligence by which we can come to Kṛṣṇa is a special kind of intelligence.

Prabhupāda: That is perfect intelligence. Therefore we say Kṛṣṇa is the perfect teacher. In the Fifteenth Chapter, sarvasya cāhaṁ hṛdi sanniviṣṭo mattaḥ smṛtir jñānam apohanaṁ (BG 15.15): "I am sitting in everyone's heart. All intelligence, memory, is coming from Me, and forgetfulness also is caused by Me." So He is the supreme controller in every respect.

Jayatīrtha: If Kṛṣṇa is the source of both remembrance and forgetfulness . . .

Prabhupāda: Yes. When Kṛṣṇa sees that, "Here is a rascal, so let him forget Me," so He will give him intelligence so that he can forget Kṛṣṇa for good. Not for good—at least for some time.

Svarūpa Dāmodara: That is the desire of the individual soul.

Prabhupāda: Yes. Ye yathā māṁ prapadyante (BG 4.11): "As one surrenders unto Me, according to that." Real process is surrender. So if you surrender with some reservation, with some ulterior motive, then Kṛṣṇa will give you proportionately intelligence.

When you are cent percent without any reservation surrender, then you get all facility, all help from Kṛṣṇa, without asking. Just like a small child, he is fully surrendered unto the parent. The parent looks after all the necessities. He doesn't ask anything. That is wanted. (break)

Jayatīrtha: . . . the six principles of surrender in devotional service.

Prabhupāda: Yes. That is very important. What is the time?

Jayatīrtha: Seven minutes to seven. One of the six principles is that our interest must be the same in that we can't have any separate interest outside of the interest of the Lord. So that . . .

Prabhupāda: That is surrender. You have no personal interest.

Jayatīrtha: That would be another test of the spiritual master, is that if he has some interest outside of Kṛṣṇa's interest, then we can understand that he isn't surrendered.

Prabhupāda: Anyone. All these rascals come as guru. They say: "I am Kṛṣṇa." He has got his own interest. That is immediately disqualification, that he is a rascal. Kick him in his face, as soon as he says.

Jayatīrtha: Yes. If a person is surrendering to Kṛṣṇa, he won't take over Kṛṣṇa's post.

Svarūpa Dāmodara: Here it is said by the mercy of Kṛṣṇa one gets a bona fide spiritual master.

Prabhupāda: Kṛṣṇa is always merciful. He comes Himself also and demands surrender, but we do not do that. What Kṛṣṇa can do.

Jayatīrtha: As you were saying last night, if we had no independence, then there wouldn't be any question of . . . we'd be just like dull matter. There'd be no difference. So we have that independence.

Prabhupāda: By our misuse of independence, we do not surrender. Otherwise, Kṛṣṇa says: "You surrender."

Jayatīrtha: The spiritual master teaches how to surrender to Kṛṣṇa.

Jayatīrtha: And it's done by surrendering to the teachings of the spiritual master.

Prabhupāda: Then whatever he teaches is perfect, because to the surrendered soul Kṛṣṇa gives the intelligence. So when he speaks, he speaks perfectly because Kṛṣṇa is dictating, "You do this, you speak like this, to the students."

Svarūpa Dāmodara: In the Caitanya-caritāmṛta, Caitanya Mahāprabhu says to Sanātana Gosvāmī that spiritual life starts by accepting . . . the moment the disciple accepts a spiritual master. And then he follows the instruction that . . . (break)

Jayatīrtha: She is a 40-years-old lady, her name is Lucille. She is very much actually convinced of our philosophy and is devoted to Kṛṣṇa consciousness, but the only thing is, because she comes conditioned from a previous life, she can't give up . . . has a very hard time giving up smoking cigarettes and drinking coffee. She's been trying for about nine months to give up these things . . . (indistinct) . . . but she can't do it. Still she is desirous of initiation. So I don't know what to . . . (indistinct)

Prabhupāda: No. You cannot. You cannot give. She must at least promise that he gives . . . (break) And if we promise that . . . (indistinct) . . . but after initiation if she smokes, that's not good.

Jayatīrtha: So if someone is sincere, we want them to follow devotional principles . . . (indistinct)

Svarūpa Dāmodara: That is personal motivation.

Prabhupāda: This is not surrender.

Prabhupāda: Devotion, yes. For Kṛṣṇa we can offer . . . (indistinct)

Jayatīrtha: You will go from London to Bombay?