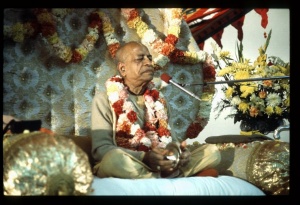 "He and his brother Sanātana were then named Sākara Mallika and Dabira Khāsa respectively, and they held responsible posts as ministers of Nawab Hussain Shah. At that time, five hundred years ago, the Hindu society was very rigid, and if a member of the brāhmin caste accepted the service of a Muhammadan ruler he was at once rejected from brāhmin society. That was the position of the two brothers Dabira Khāsa and Sākara Mallika. They belonged to the highly situated sārasvata-brāhmin . . ."

Prabhupāda: These two brothers, at that time their name was Sākara Mallika and Dabira Khāsa. So they were ostracized from the brāhmin community. That is Caitanya Mahāprabhu's special grace, that He accepted two rejected gentlemen from the brāhmin society and made them gosvāmīs. That is the special significance of Caitanya Mahāprabhu's movement. He accepted Haridāsa Ṭhākura from born in Muhammadan community and He made him the ācārya, namācārya.

Then go on. This is the new edition of Nectar of Devotion.

Pradyumna: "They belonged to the highly-situated sārasvata-brāhmin community, but they were ostracized due to their acceptance of ministerial posts in the government of Hussain Shah. It is the grace of Lord Caitanya that He accepted these two exalted personalities as His disciples . . ."

Prabhupāda: The brāhmiṇ community was so strong that because acceptance of service is the business of the śūdra . . . the brāhmiṇs, they would not accept anyone's service. The kṣatriyas, they would not accept anyone's service. And the vaiśyas also. They should live independently: brāhmiṇs, by culture of Vedic knowledge; kṣatriyas by exacting taxes from the citizens; and vaiśyas by trade, agriculture. They should live.

Here is the example, that Sākara Mallika, he was brāhmiṇ, sārasvata-brāhmiṇ. But because he accepted . . . they were learned brāhmiṇs, not fools. Very good scholar in Sanskrit and Arabian language, still, because they accepted service in the Muhammadan government, they were rejected. Immediately: no. Punishment. That is punishment. In Hindi it is called hookah pāni bandh.

In the society, in villages still, if one is ostracized, nobody will smoke with him. Hookah. Hookah means smoking. And pāni means not to accept his water hookah pāni bandh. So that is ostracization. That was taken against Sanātana Gosvāmī. They were not gosvāmī at that time. Caitanya Mahāprabhu accepted them. That is Caitanya Mahāprabhu's special grace. What is that word? (Bengali: Turn crow into a peacock) Come on.

Prabhupāda: (Bengali Dr Kapoor . . . (Bengali Prabhupāda: De Kapoor known to us for 26 years. He was a student in Allahabad.) (break)

"Lord Caitanya's principle is universal. Anyone who knows the science of Kṛṣṇa and is engaged in the service of the Lord is accepted as being in a higher position than a person born in the family of a brāhmin. That is the original principle accepted by all Vedic literatures, especially by the Bhagavad-gītā and the Śrīmad-Bhāgavatam. The principle of Lord Caitanya's movement in educating and elevating everyone to the exalted post of a gosvāmī is taught in The Nectar of Devotion."

"Lord Caitanya met the two brothers Dabira Khāsa and Sākara Mallika in a village known as Rāmakeli in the district of Maldah, and after that meeting the brothers decided to retire from government service and join Lord Caitanya. Sakara Mallika, who was later to become Rūpa Gosvāmī, retired from his post and collected all the money he had accumulated during his service. It is described in the Caitanya-caritāmṛta that his accumulated savings in gold coins equaled millions of dollars and filled a large boat. He divided the money in a very exemplary manner, which should be followed by devotees in particular and by humanity in general."

"Fifty percent of his accumulated wealth was distributed to the Kṛṣṇa conscious persons, namely the brāhmins and the Vaiṣṇavas. Twenty-five percent was distributed to relatives. And twenty-five percent was kept against emergency expenditures and personal difficulties. Later on, when Dabira Khāsa also proposed to retire, the Nawab was very much agitated and put him into jail. But Dabira Khāsa, who was later to become . . ."

Prabhupāda: In this connection, we may inform that our disciples in Kṛṣṇa consciousness movement, those who are gṛhasthas, they contribute at least fifty percent of their income. Yes. Most of them, they are full-time engaged. But if one cannot be whole time engaged . . . just like we, we have got our disciple, Professor Howard Wheeler. He gives more than fifty percent of his income for developing our New Vrindavan scheme. So we try to follow these principles laid down by Rūpa Gosvāmī, that fifty percent for Kṛṣṇa or Kṛṣṇa's devotees, twenty-five percent for personal emergencies and twenty-five percent for the dependent relatives.

There are many couples here. They are married. I got them married. Sometimes I am criticized by my Godbrothers. But they do not know why I got them married. Here is a couple, Gurudāsa and his wife, Yamunā, and . . . where is Mālatī? Mālatī's not here? Eh? Mālatī and her husband, Śyāmasundara. And another couple, Jānakī and Mukunda. I sent them first, missionary, to London to start the temple. And for one year they struggled very hard, and they called me that "I started the temple."

So my Guru Mahārāja wanted to start a temple in London. He sent two sannyāsīs, but it was not possible. But these gṛhasthas, they started. So we want to see that the mission is fulfilled. It doesn't matter whether he's a gṛhastha or sannyāsī. Kibā vipra kibā śūdra nyāsī kene naya (CC Madhya 8.128). So by getting them married, I am benefited. They have helped me.

Dr Kapoor: There is nothing against marriage.

Prabhupāda: No. But sometimes my Godbrother criticizes that I am sannyāsī, I am taking part in marriage. So I have got very good difficulties. Here, when I come India, they say that I am spoiling Hindu system of religion. And when I go there, the Christian says that, "Here is the greatest enemy." (laughter) (Bengali whether I move ahead or move backward they always criticize) This is my position. You see? If I go ahead, then (Bengali a son without a progeny). And if I go behind, then (Bengali bark repeatedly). So what can be done? I have to execute my duty. I am not encouraged by the government, by my Godbrothers, and still I have to do this duty. What can be done?

So, so far I am concerned, I know by getting them married I am benefited. They have done so much . . . he's also married, this boy (referring to Pradyumna). He's always . . . he has got his wife, he has got children, but he doesn't care for his wife and children. He remains with me and he helps me in editing the Sanskrit portion of my books. He has studied Sanskrit. He was not a Sanskrit scholar, but by his endeavor he has studied Sanskrit. So all my books, Sanskrit editing work, is done by him.

Prabhupāda: Yes. He works very hard. Now he understands Sanskrit. He can read Sanskrit. So if I get facility for pushing on my missionary work, there is no harm in getting married. Because in Europe, America, these boys and girls, they live like friends. So I said that, "You cannot live as friends. You must get yourself married," and that is . . . that has proved. Here is a girl. Where is that Śāradīyā? Śāradīyā is here?

Prabhupāda: Eh. When she was young, fifteen years, she very frankly told me that "I want this boy to marry, Vaikuṇṭha." (laughter) So I told Vaikuṇṭha that, "You, you are reserved for her. As soon as she's over sixteen years, you have to marry her." Another girl, she is now at Manila, she's Australian. She was a famous actress. So she came to Los Angeles and surrendered to me. And I asked her that, "You go to Tokyo. I have got a disciple, and get yourself married with him."

Prabhupāda: Yes. She never saw him. So in European countries . . .

Prabhupāda: It is impossible. But she went and married him, and they're living peacefully. Now they are married. So I have to see the interest of my missionary work. Never mind. Of course it is a novel thing, that sannyāsī is taking part in marriage. But what can be done? I have to execute my mission.

Pradyumna: "But Dabira Khāsa, who was later to become Śrīla Sanātana Gosvāmī, took advantage of his brother's personal money . . ."

Prabhupāda: You can arrange a light here. Yes.

Pradyumna: ". . . which had been deposited with a village banker and escaped from the prison of Hussain Shah. In this way, both brothers joined Lord Caitanya Mahāprabhu."

"Later, Śrīla Rūpa Gosvāmī Prabhupāda elaborated the teachings of the Lord with profound knowledge of revealed scriptures and authoritative references from various Vedic literatures. Śrīla Śrīnivāsa Ācārya describes in his prayers to the six Gosvāmīs that they were all highly learned scholars, not only in Sanskrit, but also in foreign languages such as Persian and Arabian. They very scrutinizingly studied all the Vedic literatures in order to establish the cult of Caitanya Mahāprabhu on the authorized principles of Vedic knowledge."

Prabhupāda: My Guru Mahārāja, Bhaktisiddhānta Sarasvatī Gosvāmī Mahārāja, he used to advise to read Bhakti-rasāmṛta-sindhu, everyone, after initiation. At least, he advised me. So this Bhakti-rasāmṛta-sindhu is very important as study book for the Vaiṣṇavas. It is the science of devotional service. And people are, in Western countries, taking interest. In the Temple University, it has become a textbook in the religious class. There are sixty students who are regularly studying the Bhakti . . . Nectar of Devotion published by us. And gradually it is being introduced in other colleges and schools.

(aside) I think you are straining.

Gurudāsa: The candle is coming.

Prabhupāda: Coming. Hmm. So we can stop. Acyutānanda, you can have kīrtana (break) (kīrtana) (break) (end)