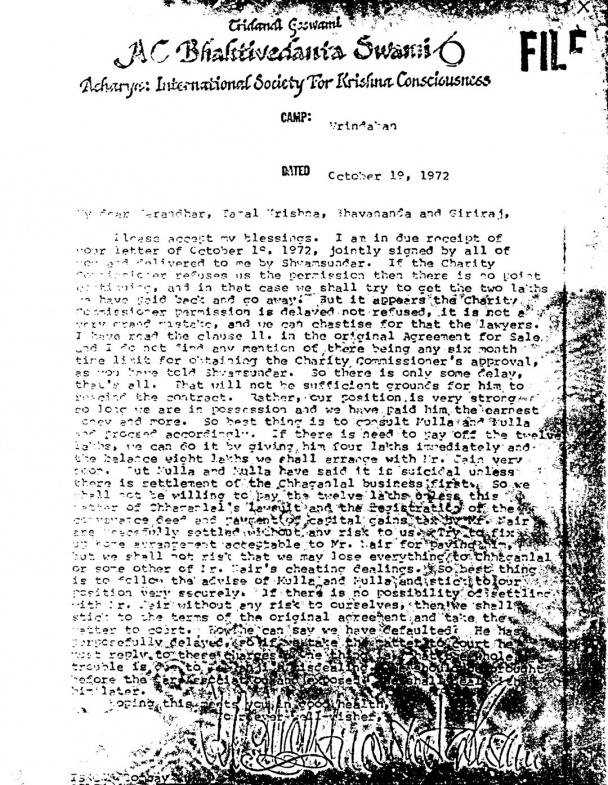 Please accept my blessings. I am in due receipt of your letter of October 18, 1972, jointly signed by all of you and delivered to me by Shyamasundar. If the Charity Commissioner refuses us the permission then there is no point continuing, and in that case we shall try to get the two lakhs we have paid back and go away. But it appears the Charity Commissioner permission is delayed and not refused, it is not a very grand mistake, and we can chastise for that the lawyers. I have read the clause 11, in the original Agreement for Sale and I do not find any mention of there being any six month time limit for obtaining the Charity Commissioner's approval, as you have told Shyamsundar. So there is only some delay, that's all. That will not be sufficient grounds for him to rescind the contract. Rather, our position is very strong so long we are in possession and we have paid him the earnest money and more. So best thing is to consult Mulla and Mulla and proceed accordingly. If there is need to pay off the twelve lakhs, we can do it by giving him four lakhs immediately and the balance eight lakhs we shall arrange with Mr. Jain very soon. But Mulla and Mulla have said it is suicidal unless there is settlement of the Chhaganlal business first. So we shall not be willing to pay the twelve lakhs unless this matter of Chhaganlal's lawsuit and the registration of the conveyance deed and payment of capital gains tax by Mr. Nair are peacefully settled without any risk to us. Try to fix up some arrangement acceptable to Mr. Nair for paying him, but we shall not risk that we may lose everything to Chhaganlal or some other of Mr. Nair's cheating dealings. So best thing is to follow the advise of Mulla and Mulla and stick to our position very securely. If there is no possibility of settling with Mr. Nair without any risk to ourselves, then we shall stick to the terms of the original agreement and take the matter to court. How he can say we have defaulted? He has purposefully delayed, so if we take the matter to court he must reply to these charges. One thing is, that the whole trouble is due to Deewanjee's misdealings. He should be brought before the Bar Association and exposed. We shall deal with him later.
Hoping this meets you in good health,
Your ever well-wisher,