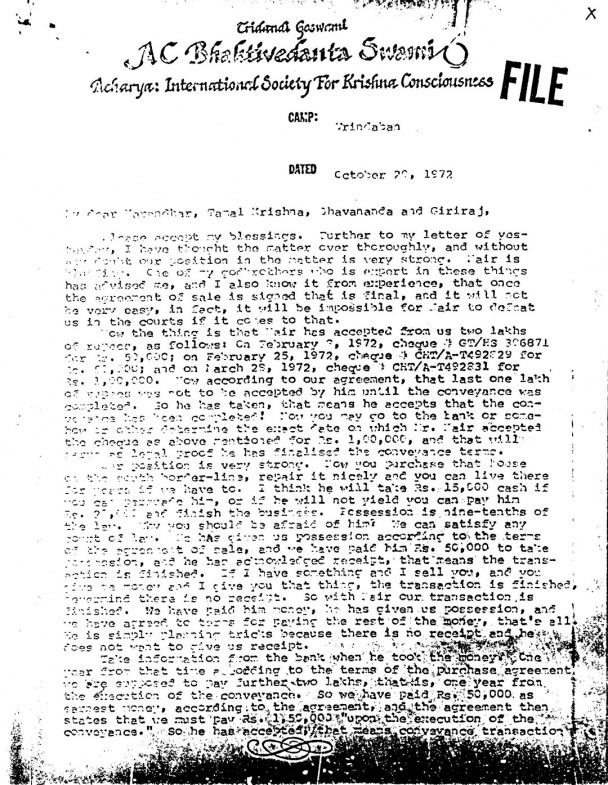 Letter to Karandhar, Tamal Krishna, Bhavananda and Giriraj (Page 1 of 2) 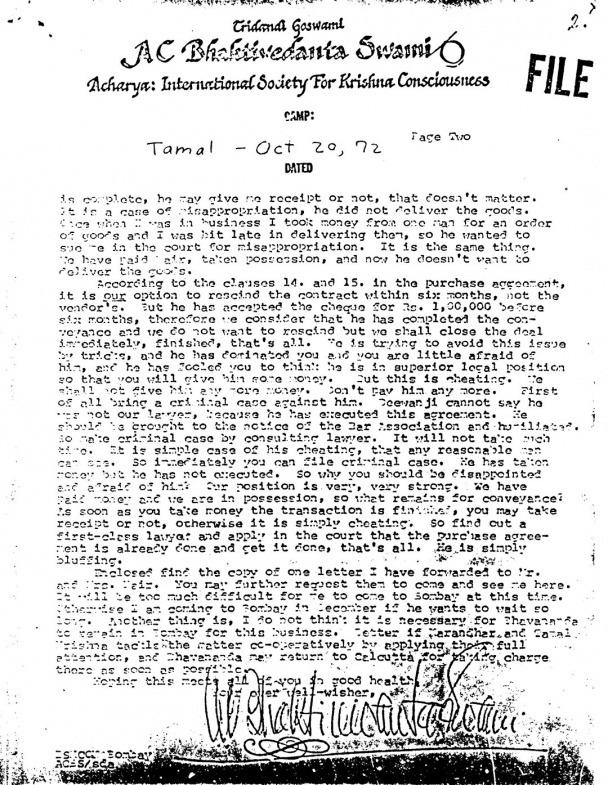 Letter to Karandhar, Tamal Krishna, Bhavananda and Giriraj (Page 2 of 2)

Please accept my blessings. Further to my letter of yesterday, I have thought the matter over thoroughly, and without any doubt our position in the matter is very strong. Nair is bluffing. One of my godbrothers who is expert in these things has advised me, and I also know it from experience, that once the agreement of sale is signed that is final, and it will not be very easy, in fact, it will be impossible for Nair to defeat us in the courts if it comes to that.
Now the thing is that Nair has accepted from us two lakhs of rupees, as follows: On February 8, 1972, cheque #GT/HS 306871 for Rs. 50,000; on February 25, 1972, cheque CHT/A-T492829 for Rs. 50,000; and on March 28, 1972, cheque # CHT/A-T492831 for Rs. 1,00,000. Now according to our agreement, that last one lakh of rupees was not to be accepted by him until the conveyance was completed. So he has taken, that means he accepts that the conveyance has been completed! Now you may go to the bank or somehow or other determine the exact date on which Mr. Nair accepted the cheque as above mentioned for Rs. 1,00,000, and that will serve as legal proof he has finalised the conveyance terms.
Our position is very strong. Now you purchase that house on the south border-line, repair it nicely and you can live there for years if we have to. I think he will take Rs. 15,000 cash if you can persuade him, or if he will not yield you can pay him Rs. 20,000 and finish the business. Possession is nine-tenths of the law. Why you should be afraid of him? We can satisfy any court of law. He has given us possession according to the terms of the agreement of sale, and we have paid him Rs. 50,000 to take possession, and he has acknowledged receipt, that means the transaction is finished. If I have something and I sell you, and you give me money and I give you that thing, the transaction is finished, never mind there is no receipt. So with Nair our transaction is finished. We have paid him money, he has given us possession, and we have agreed to terms for paying the rest of the money, that's all. He is simply planning tricks because there is no receipt and he does not want to give us receipt.
Take information from the bank when he took the money. One year from that time according to the terms of the purchase agreement we are supposed to pay further two lakhs, that is, one year from the execution of the conveyance. So we have paid Rs. 50,000 as earnest money, according to the agreement, and the agreement then states that we must pay Rs. 1,50,000 "upon the execution of the conveyance." So he has accepted that means conveyance transaction is complete, he may give me receipt or not, that doesn't matter. It is a case of misappropriation, he did not deliver the goods. Once when I was in business I took money from one man for an order of goods and I was bit late in delivering them, so he wanted to sue me in the court for misappropriation. It is the same thing. We have paid Nair, taken possession, and now he doesn't want to deliver the goods.
According to the clauses 14 and 15 in the purchase agreement, it is our option to rescind the contract within six months, not the vendor's. But he has accepted the cheque for Rs. 1,00,000 before six months, therefore we consider that he has completed the conveyance and we do not want to rescind but we shall close the deal immediately, finished, that's all. He is trying to avoid this issue by tricks, and he has dominated you and you are little afraid of him, and he has fooled you to think he is in superior legal position so that you will give him some money. But this is cheating. We shall not give him any more money. Don't pay him any more. First of all bring a criminal case against him. Deewanji cannot say he was not our lawyer, because he has executed this agreement. He should be brought to the notice of the Bar Association and humiliated. So make criminal case by consulting lawyer. It will not take much time. It is simple case of his cheating, that any reasonable man can see. So immediately you can file criminal case. He has taken money but he has not executed. So why you should be disappointed and afraid of him? Our position is very, very strong. We have paid money and we are in possession, so what remains for conveyance? As soon as you take money the transaction is finished, you may take receipt or not, otherwise it is simply cheating. So find out a first-class lawyer and apply in the court that the purchase agreement is already done and get it done, that's all. He is simply bluffing.
Enclosed find the copy of one letter I have forwarded to Mr. and Mrs. Nair. You may further request them to come and see me here. It will be too much difficult for me to come to Bombay at this time. Otherwise I am coming to Bombay in December if he wants to wait so long. Another thing is, I do not think it is necessary for Bhavananda to remain in Bombay for this business. Better if Karandhara and Tamal Krishna tackle the matter co-operatively by applying their full attention, and Bhavananda may return to Calcutta for taking charge there as soon as possible.
Hoping this meets all of you in good health.
Your ever well-wisher,