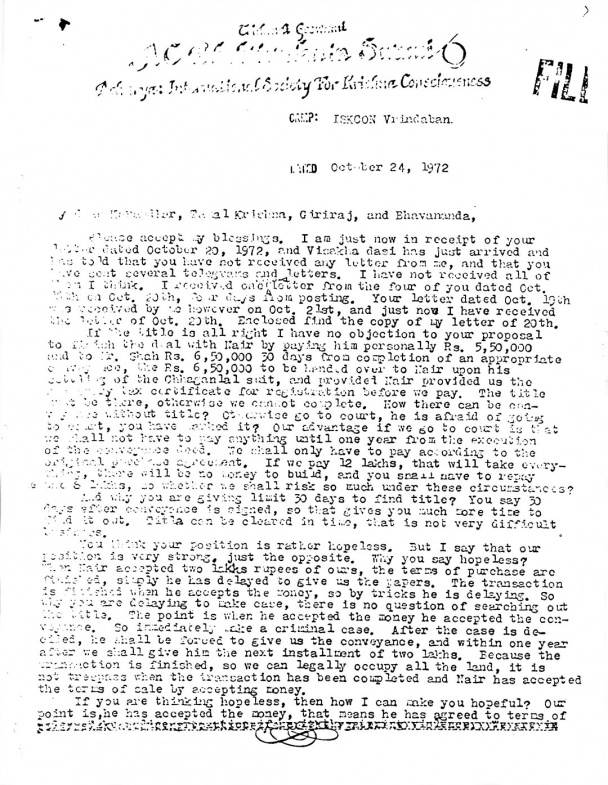 Letter to Karandhar, Tamal Krishna, Giriraj, and Bhavananda (Page 1 of 2) 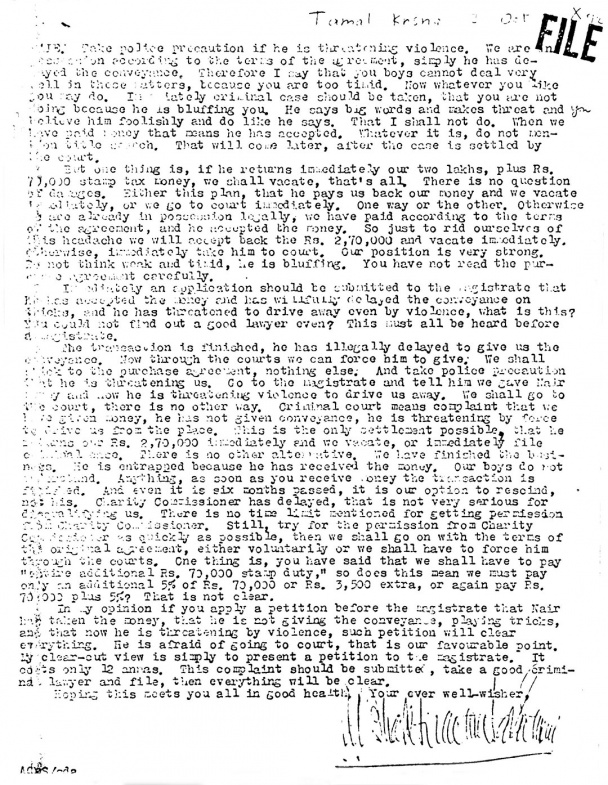 Letter to Karandhar, Tamal Krishna, Giriraj, and Bhavananda (Page 2 of 2)

Please accept my blessings. I am just now in receipt of your letter dated October 20, 1972, and Visakha dasi has just arrived and has told that you have not received any letter from me, and that you have sent several telegrams and letters. I have not received all of them I think. I received one express letter from the four of you dated Oct. 16th on Oct. 20th, four days from posting. Your letter dated Oct. 19th was received by me however on Oct. 21st, and just now I have received the letter of Oct. 20th. Enclosed find the copy of my letter of 20th.

If the title is all right I have no objection to your proposal to finish the deal with Nair by paying him personally Rs. 5,50,000 and to Mr. Shah Rs. 6,50,000 30 days from completion of an appropriate conveyance, the Rs. 6,50,000 to be handed over to Nair upon his settling of the Chhanganlal suit, and provided Nair provided us the necessary tax certificate for registration before we pay. The title must be there, otherwise we cannot complete. How there can be conveyance without title? Otherwise go to court, he is afraid of going to court, you have marked it? Our advantage if we go to court is that we shall not have to pay anything until one year from the execution of the conveyance deed. We shall only have to pay according to the original purchase agreement. If we pay 12 lakhs, that will take everything, there will be no money to build, and you shall have to repay the 8 lakhs, so whether we shall risk so much under these circumstances?

And why you are giving limit 30 days to find title? You say 30 days after conveyance is signed, so that gives you much more time to find it out. Title can be cleared in time, that is not very difficult business.

You think your position is rather hopeless. But I say that our position is very strong, just the opposite. Why you say hopeless? When Nair accepted two lakhs rupees of ours, the terms of purchase are finished, simply he has delayed to give us the papers. The transaction is finished when he accepts the money, so by tricks he is delaying. So why you are delaying to make case, there is no question of searching out the title. The point is when he accepted the money he accepted the conveyance. So immediately make a criminal case. After the case is decided, he shall be forced to give us the conveyance, and within one year after we shall give him the next installment of two lakhs. Because the transaction is finished, so we can legally occupy all the land, it is not trespass when the transaction has been completed and Nair has accepted the terms of sale by accepting money.

If you are thinking hopeless, then how I can make you hopeful? Our point is, he has accepted the money, that means he has agreed to terms of SALE. Take police precaution if he is threatening violence. We are in possession according to the terms of the agreement, simply he has delayed the conveyance. Therefore I say that you boys cannot deal very well in these matters, because you are too timid. Now whatever you like you may do. Immediately criminal case should be taken, that you are not doing because he is bluffing you. He says big words and makes threat and you believe him foolishly and do like he says. That I shall not do. When we have paid money that means he has accepted. Whatever it is, do not mention title search. That will come later, after the case is settled by the court.

But one thing is, if he returns immediately our two lakhs, plus Rs. 70,000 stamp tax money, we shall vacate, that's all. There is no question of damages. Either this plan, that he pays us back our money and we vacate immediately, or we go to court immediately. One way or the other. Otherwise we are already in possession legally, we have paid according to the terms of the agreement, and he accepted the money. So just to rid ourselves of this headache we will accept back the Rs. 2,70,000 and vacate immediately. Otherwise, immediately take him to court. Our position is very strong. Do not think think weak and timid, he is bluffing. You have not read the purchase agreement carefully.

Immediately an application should be submitted to the magistrate that he has accepted the money and has willfully delayed the conveyance on tricks, and he has threatened to drive away even by violence, what is this? You could not find out a good lawyer even? This must all be heard before a magistrate.

The transaction is finished, he has illegally delayed to give us the conveyance. Now through the courts we can force him to give. We shall stick to the purchase agreement, nothing else. And take police precaution that he is threatening us. Go to the magistrate and tell him we gave Nair money and now he is threatening violence to drive us away. We shall go to the court, there is no other way. Criminal court means complaint that we have given money, he has not given conveyance, he is threatening by force to drive us from the place. This is the only settlement possible, that he returns our Rs. 2,70,000 immediately and we vacate, or immediately file criminal case. There is no other alternative. We have finished the business. He is entrapped because he has received the money. Our boys do not understand. Anything, as soon as you receive money the transaction is finished. And even it is six months passed, it is our option to rescind, not his. Charity Commissioner has delayed, that is not very serious for disqualifying us. There is no time limit mentioned for getting permission from Charity Commissioner. Still, try for the permission from Charity Commissioner as quickly as possible, then we shall go on with the terms of the original agreement, either voluntarily or we shall have to force him through the courts. One thing is, you have said that we shall have to pay "entire additional Rs. 70,000 stamp duty," so does this mean we must pay only an additional 5% of Rs. 70,000 or Rs. 3,500 extra, or again pay Rs. 70,000 plus 5%? That is not clear.

In my opinion if you apply a petition before the magistrate that Nair has taken the money, that he is not giving the conveyance, playing tricks, and that now he is threatening by violence, such petition will clear everything. He is afraid of going to court, that is our favorable point. My clear-cut view is simply to present a petition to the magistrate. It costs only 12 annas. This complaint should be submitted, take a good criminal lawyer and file, then everything will be clear.

Hoping this meets you all in good health.