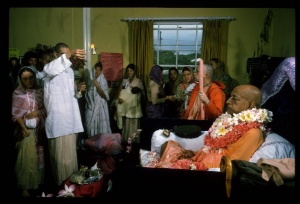 Prabhupāda: You have not met?

Gurudāsa: Yes, I have met him. At Janmāṣṭamī two years ago at New Vrindavan.

Pañca-draviḍa: He is coming in on the third shift, I think.

Pañca-draviḍa: They will . . . Girirāja and Bhavānanda and them, they will probably be in the third shift, depending on how the land deal goes, whether it is settled by then.

Pañca-draviḍa: The last situation I had heard was that everybody was agreeable, that Nair himself was agreeable and that everything was proceeding, but it was in the hands of the Municipality, and that was going so slow, and that Nair himself, he is saying so many dubious things on the outside, but in complete agreement once you step into a room with him. So we are not so much sure. It's more or less in the hands of the Municipality, but who knows what is going on behind the table. Something like that. (break)

Gurudāsa: They said you wanted to see me?

Prabhupāda: Huh? Oh, about that typing.

Prabhupāda: Oh, you have secured that house in London.

Devotee (1): He's the king there, right? The queen's husband.

And the present queen's father, his second brother, he was made king, King George VI. Otherwise, this Duke of Windsor . . . when he refused to become the king, he became the Duke of Windsor and he was given this Berkshire Palace.

Gurudāsa: He also is the one who has the Windsor Palace?

Prabhupāda: That palace we see in passing.

Prabhupāda: Berkshire Palace is also nearby.

Prabhupāda: It is nearer to John's Tittenhurst. What is that?

Gurudāsa: She says she has four fathers and mothers.

Sarasvatī: I told her.

Prabhupāda: You have told her?

Sarasvatī: I told her that she's . . . Śyāmasundara is coming very soon.

Acyutānanda: We can send them, but they won't go.

Prabhupāda: So if you can make somebody agree, then he is coming tomorrow or day after tomorrow.

Acyutānanda: But no one will agree to leave you.

Acyutānanda: Letter from the press, regarding my songbook.

Prabhupāda: So you can make one condition, that if you return us, we can go at eight or nine, but you must return us by four. Then we can go. Make this condition. Instead of saying no, make some condition.

Prabhupāda: I have asked him to come day after tomorrow. He comes generally at about ten.

Acyutānanda: But I heard that last year we went and it was not a very big function. (break) I wrote that letter to this Lalitānanda about this Jāhnavī . . .

Acyutānanda: So they don't want to put it in Back to Godhead because I used the word "infantile, naive, undereducated and incompetent," and that's considered most ungentlemanly.

Acyutānanda: But Prabhupāda says fools and rascals and . . .

Devotee (2): I have written so many articles in the past two years, and one has been published in two years.

Prabhupāda: For Back to Godhead?

Devotee (2): Back to Godhead, yes. They say no one can understand them.

Acyutānanda: (indistinct) . . . from Subala dāsa Mahārāja that they have received his letter on September 16th and I have requested Karandhara to send him one Bhagavad-gītā As It Is.

Prabhupāda: (Bengali: Where have you got the book?

Prabhupada: Oh, then you show it to me.) (break)