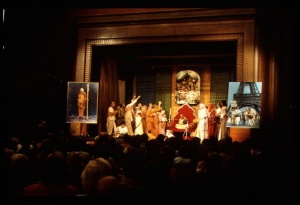 Prabhupāda: So these people, the sahajiyās, they have become dogs and hogs. Now after this life . . . (indistinct)

For their sinful activities they have become dogs and hogs. Now unconsciously as dogs and hogs they are taking advantage of the Vṛndāvana land. Now they become. Now they will become pure devotees. Just like we see in the life of Bharata Mahārāja: so much austerity, and because a little attachment for the deer, the next life he was taken. The next life he was taken, Yamala-arjuna; they became trees. But on account of staying in Vṛndāvana, next life . . . (indistinct)

Gurudāsa: Acyutānanda Mahārāja said that he has heard that Bhaktisiddhānta Sarasvatī has said that these turtles in Vṛndāvana were previously caste gosvāmīs.

Gurudāsa: It's a result of trying to cheat māyā, then?

Prabhupāda: Yes, this is . . . they are showing that, "We are gosvāmīs," but doing all nonsense. This is cheating. Like this man, he is thinking that, "Somehow or other I am getting money through Dāmodara, and I shall drink and everything, do all this." It is not cheating? Gosvāmī means one who has full control over the senses. That is gosvāmī.

But he is taking the title of gosvāmī but he has no control over his senses. That is cheating. So you cannot cheat that way, Kṛṣṇa or māyā. Whatever little success I have got, I have tried always not to cheat Kṛṣṇa or māyā. That's all.

Prabhupāda: Otherwise, Bon Mahārāja was deputed, but he wanted to cheat. He thought that, "I shall go to England and become . . . when I come back, I shall advertise myself, 'I have preached in this way and that way and that way' and exploit." Just like Vivekananda did. They are all cheaters. Vivekananda had no knowledge even to . . . what is to give. He was such a rascal. And he went to America and he picked up three women, that's all.

That is his achievement. One Sister Nivedita, his private secretary. That's all. This is all cheating. If you do not know . . . they go for wine and women, that's all. All these svāmīs, they are going now these days. Saccidananda, that long-haired man, he is also being sued for something. Who was telling me?

Prabhupāda: Yes. So this cheating process is going on. But you cannot cheat Kṛṣṇa or māyā. That is not possible. This is gosvāmī, that is . . . I have explained this fact. To these sahajiyās. Don't make compromise that, "Somehow or other I'll chant Hare Kṛṣṇa, everything will be done." Daivī hy eṣā guṇamayī mama māyā duratyayā (BG 7.14). Duratyayā: it is very difficult to surmount the laws of nature. So how is that cheat? Just like laws of nature are so strict, if you eat more, immediately you get indigestion. So how you can cheat? You can experience. Nature's law is working.

Therefore, to become brāhmin means satyam. You know the meaning of satyam? Satyam means truth. The first quality is truth. Satyaṁ śaucam ārjavam āstikyaṁ jñānaṁ vijñānam. The beginning is satyam. Generally, the people in pilgrimages like Vṛndāvana and other, they have taken this religiousness as a profession to earn money, just like other businessmen do. That is cheating.

Generally, the people in pilgrimages like Vṛndāvana and other, they have taken this religiousness as a profession to earn money, just like other businessmen do. That is cheating. Generally they do so. (pause) In Los Angeles they are keeping the standard given by . . . (indistinct) . . . at every āratik at the morning, at least 150 men there. Even though I am not present, by system, by kīrtana, dancing, offering Deity worship nicely, people are coming, of . . . (indistinct)

So we have to maintain the standard very strictly. Otherwise it will again become Rādhā-Dāmodara temple and Bharatpur Mahārāja become. You will have to find out some customer to sell it. What is the use of starting temple if you do not do it properly? Why should you waste your energy? Better travel and preach. Don't take the risk of starting big, big temple. As soon as the energy is gone, there will be trouble.

That Govindajī's temple, that man lost everything because he was cheating. If this man is also cheating, then he will also. Our Tīrtha Mahārāja is cheating, then what is his . . .? He got so many things, but he could not do anything. Now he is after these buildings, that's all. Otherwise, what is his credit? He is not a good preacher. He was as the head of Caitanya Maṭha. How much duty was . . . heavy duty he had to preach. But he had no preaching capacity. The only one in . . .

Prabhupāda: Yes. So one must be qualified to preach. If he is a cheater, how he can preach?

Gurudāsa: If he's preaching, the qualification will come.

Prabhupāda: Yes. If he is sincere, then his capacity will increase. Otherwise, if he wants to cheat, then it will decrease.

Gurudāsa: So what is the purpose for very large temples in India? Just for the . . .

Prabhupāda: Just to attract people, to give them spiritual inspiration. That is the purpose of temple. Not that you think that, "People will come and give me money, and I shall eat and sleep very nicely," then it will gradually become Rādhā-Dāmodara temple or any other temple, Bharatpur Mahārāja's house.

Gurudāsa: I'm thinking that if we're endeavoring with as much energy to preach and have a modest temple, that everyone's energy will be increased—our devotees' and the outsiders'.

Prabhupāda: That is the basic principle. If you lose your energy, then it is everything is lost. And to keep the energy intact, you must be very strict in following the principles.

Gurudāsa: Subala Mahārāja was joking with me that I am wanting to preach, but instead I am just thinking of steel and cement.

Gurudāsa: Subala Mahārāja was joking with me that I am wanting to preach, but instead I am thinking about steel and cement and bricks.

But because we are materialistic, sometimes steel and cement attracts us more than Kṛṣṇa. So this Bombay affair is giving me a little depression. Because so highly thought of, now these people, they do not want to stay there. Just like this Mahaṁsa, Dinanātha, they do not wish to return. Something has to be done.

Gurudāsa: Actually, it is not only one or two isolated cases.

Prabhupāda: There are many. I have studied all of them.

Gurudāsa: If it was one or two isolated cases, one can think maybe it is personal difficulty. But it is many cases.