721107 - Letter to Krsnadasa written from Vrndavana 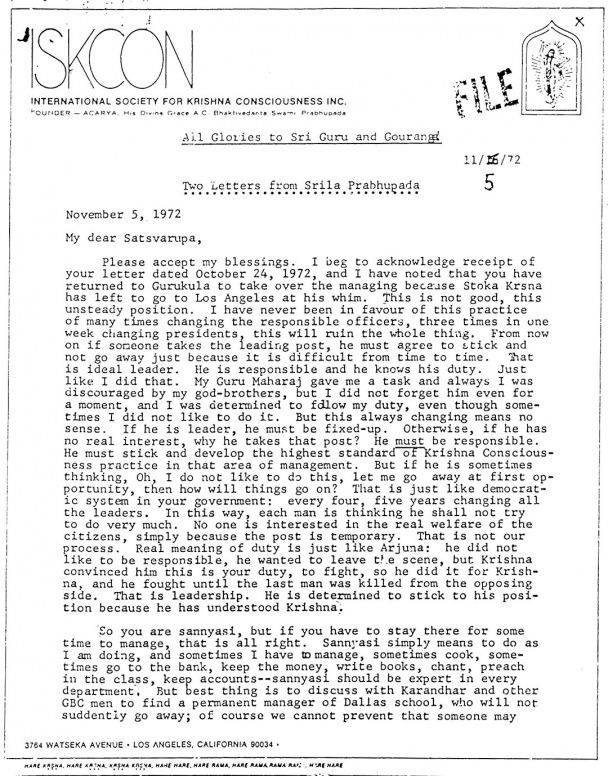 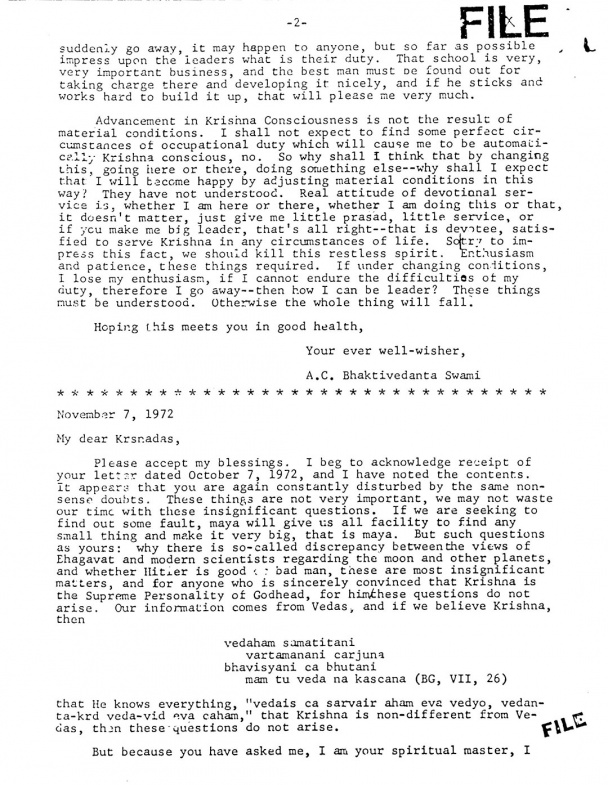 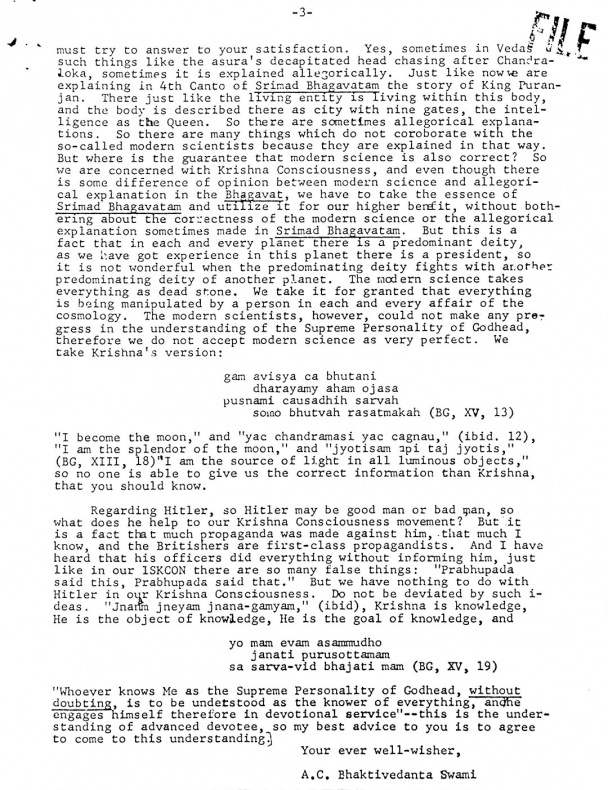 All Glories to Sri Guru and Gouranga

Please accept my blessings. I beg to acknowledge receipt of your letter dated October 7, 1972, and I have noted the contents. It appears that you are again constantly disturbed by the same nonsense doubts. These things are not very important, we may not waste our time with these insignificant questions. If we are seeking to find out some fault, maya will give us all facility to find any small thing and make it very big, that is maya. But such questions as yours: why there is so-called discrepancy between the views of Bhagavat and modern scientists regarding the moon and other planets, and whether Hitler is good or bad man, these are most insignificant matters, and for anyone who is sincerely convinced that Krishna is the Supreme Personality of Godhead, for him these questions do not arise. Our information comes from Vedas, and if we believe Krishna, then

that He knows everything, and "vedais ca sarvair aham eva vedyo vedanta-krd veda-vid eva caham (BG 15.15)," that Krishna is non-different from Vedas, then these questions do not arise.

But because you have asked me, I am your spiritual master, I must try to answer to your satisfaction. Yes, sometimes in Vedas such things like the asura's decapitated head chasing after Chandraloka, sometimes it is explained allegorically. Just like now we are explaining in 4th Canto of Srimad Bhagavatam the story of King Puranjan. Just like the living entity is living within this body, and the body is described there as city with nine gates, the intelligence as the Queen. So there are sometimes allegorical explanations. So there are many things which do not corroborate with the so-called modern science, because they are explained in that way. But where is the guarantee that modern science is also correct? So we are concerned with Krishna Consciousness, and even though there is some difference of opinion between modern science and allegorical explanation in the Bhagavat, we have to take the essence of Srimad Bhagavatam and utilize it for our higher benefit, without bothering about the correctness of the modern science or the allegorical explanation sometimes made in Srimad Bhagavatam. But this is a fact that in each and every planet there is a predominant deity, as we have got experience in this planet there is a president, so it is not wonderful when the predominating deity fights with another predominating deity of another planet. The modern science takes everything as dead stone. We take it for granted that everything is being manipulated by a person in each and every affair of the cosmology. The modern scientists however could not make any progress in the understanding of the Supreme Personality of Godhead, therefore we do not accept modern science as very perfect. We take Krishna's version:

"I become the moon," and "yac chandramasi yac cagnau," (ibid, 12) "I am the splendor of the moon," and "jyotisam api taj jyotis," (BG 13.18) "I am the source of light in all luminous objects," so no one is able to give us the correct information than Krishna, that you should know.

Regarding Hitler, so Hitler may be good man or bad man, so what does he help to our Krishna Consciousness movement? But it is a fact that much propaganda was made against him, that much I know, and the Britishers are first-class propagandists. And I have heard that his officers did everything without informing him, just like in our ISKCON there are so many false things: "Prabhupada said this, Prabhupada said that." But we have nothing to do with Hitler in our Krishna Consciousness. Do not be deviated by such ideas "Jnanam [handwritten] jneyam jnana-gamyam," (BG 13.18) (ibid), Krishna is knowledge, He is the object of knowledge, He is the goal of knowledge, and

"Whoever knows Me as the Supreme Personality of Godhead, without doubting, is to be understood as the knower of everything, and he engages himself therefore in devotional service"--this is the understanding of advanced devotee, so my best advice to you is to agree to come to this understanding.