721213 - Letter to Jayadharma written from Ahmedabad 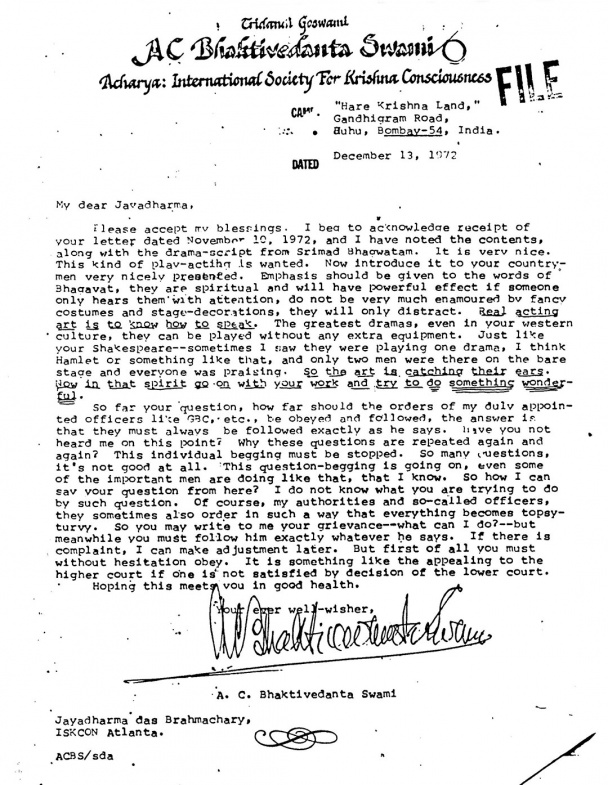 Please accept my blessings. I beg to acknowledge receipt of your letter dated November 10, 1972, and I have noted the contents, along with the drama-script from Srimad Bhagwatam. It is very nice. This kind of play-acting is wanted. Now introduce it to your country-men very nicely presented. Emphasis should be given to the words of Bhagavat, they are spiritual and will have powerful effect if someone only hears them with attention, do not be very much enamoured by fancy costumes and stage-decorations, they will only distract. Real acting art is to know how to speak. The greatest dramas, even in your western culture, they can be played without any extra equipment. Just like your Shakespeare--sometimes I saw they were playing one drama, I think Hamlet or something like that, and only two men were there on the bare stage and everyone was praising. So the art is catching their ears. Now in that spirit go on with your work and try to do something wonderful.
So far your question, how far should the orders of my duly appointed officers like GBC, etc., be obeyed and followed, the answer is that they must always be followed exactly as he says. Have you not heard me on this point? Why these questions are repeated again and again? This individual begging must be stopped. So many questions, it's not good at all. This question-begging is going on, even some of the important men are doing like that, that I know. So how I can say your question from here? I do not know what you are trying to do by such question. Of course, my authorities and so-called officers, they sometimes also order in such a way that everything becomes topsy-turvy. So you may write to me your grievance--what can I do?--but meanwhile you must follow him exactly whatever he says. If there is complaint, I can make adjustment later. But first of all you must without hesitation obey. It is something like the appealing to the higher court if one is not satisfied by decision of the lower court.
Hoping this meets you in good health.