730104 - Letter to Dinatarini written from Bombay 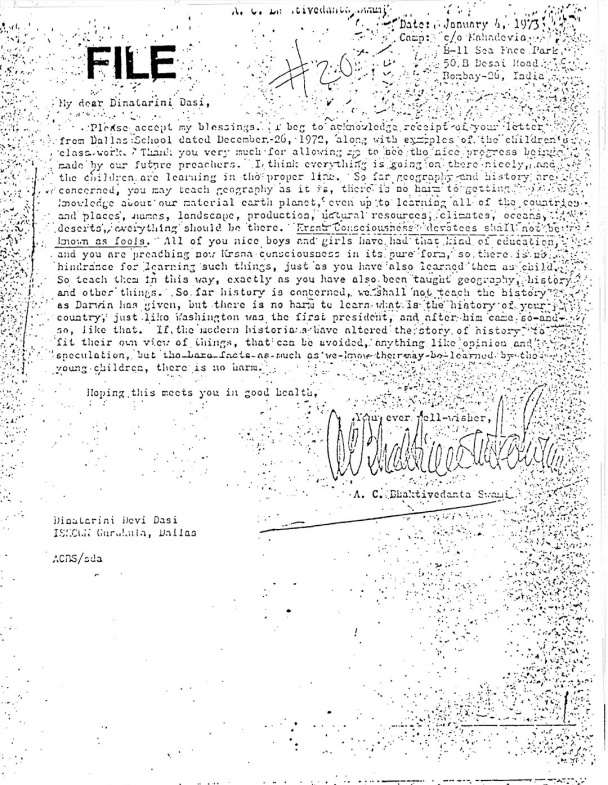 Please accept my blessings. I beg to acknowledge receipt of your letter from Dallas School dated December 26, 1972, along with examples of the children's classwork. Thank you very much for allowing me to see the nice progress being made by our future preachers. I think everything is going on there nicely, and the children are learning in the proper line. So far geography and history are concerned, you may teach geography as it is, there is no harm to getting knowledge about our material earth planet, even up to learning all of the countries and places, names, landscape, production, natural resources, climates, oceans, deserts, everything should be there.Krsna Consciousness devotees shall not be known as fools. All of you nice boys and girls have had that kind of education, and you are preaching now Krsna consciousness in its pure form, so there is no hindrance for learning such things, just as you have also learned them as child. So teach them in this way, exactly as you have also been taught geography, history and other things. So far history is concerned, we shall not teach the history as Darwin has given, but there is no harm to learn what is the history of your country, just like Washington was the first president, and after him came so-and-so, like that. If the modern historians have altered the story of history to fit their own view of things, that can be avoided, anything like opinion and speculation, but the bare facts as much as we know them may be learned by the young children, there is no harm.

Hoping this meets you in good health,