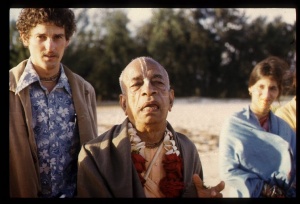 (poor audio—microphone too far away)

Prabhupāda: He has written that poetry.

Amogha: Yes, yes. He's very nice. Actually he wants to become initiated, but he can't chant. The only thing, he doesn't chant rounds, and . . .

Amogha: He says that, "If I do that, I can't do my business," and he has many reasons. For some ten days he chanted sixteen rounds, and then he just stopped and couldn't, and now he doesn't chant at all. But he's very sincere. He works very hard.

Amogha: Yes. The only problem is that in his community he's rejected.

Amogha: Yes, because a few years ago his family left him— and his wife and children deserted him, and he . . . the wife told many stories about him, that he was very . . . doing degraded things, and so everyone rejects him. And when he speaks to Indian people, they reject. He irritates them. And also sometimes he is . . . it can be changed, but he is . . . he makes them irritated, a little too much pride. But he can be changed, because he's changing so much. But he tries very, very hard. Only we have to get him to agree to chant. And now he has another wife and a child.

Amogha: A child. Yes. One boy was born just before we came here in August, and he seems to be a devotee, the baby, because he . . . whenever you say: "Hare Kṛṣṇa," he smiles.

Prabhupāda: Then why he's not married, wife?

Amogha: Yes, yes. He says it was a great mistake, because if we had come sooner, then he would not . . . so we will try to engage him. Also this girl which I want to initiate, she can speak a fair amount of Indonesian already, and she can help translation work and also preaching.

Amogha: That girl has a sister who also chants sixteen rounds and follows the rules. But sometimes in her past she failed and stopped, and she is not as steady. So I didn't recommend. But I don't know . . .

Amogha: That is better, because they're sisters, and if one is then the other is and the other is not then it is difficult. So I will learn Indonesian carefully.

Amogha: Because also, even if someone is expert in English, if they don't practice or come in touch with Kṛṣṇa consciousness, then they still cannot say it.

Prabhupāda: My point is this change is . . . (indistinct)

Amogha: If Macmillan publishes Bhagavad-gītā in English, is there any difficulty for us to publish by another company in another language?

Amogha: I will ask about it.

Amogha: The professor, head of the department of Sanskrit, University of Indonesia . . . now today coming. About 9:30 I made appointment, and if we could influence her also, then we will have some facility to preach in the university . . . (indistinct)

Those Bali Hindus are preparing very nicely for tomorrow morning. They want us to arrive at 7:30 in their temple, and many people will come, and they will honor you very nicely. They will bring the vyāsāsana all the way there.

Amogha: Actually, I think these Indian people are not very intelligent. Even we have preached to them over a year, and they say: "Yes, Swāmījī. Yes, Swāmījī. Yes, we understand." But they don't. And they're offering respect, but how much philosophy they can grasp? I don't think it's very much. But the younger ones, about ten, twelve, fifteen years old, they're very intelligent. There were some boys there also who used to come to our kīrtana. And I remember how they grasped the philosophy before. They could repeat it. But they didn't remain steady. But in the future.

Amogha: That is a problem in this Indian community. They are very . . . many kinds of envy. And their enviousness makes everyone . . . for example, we had kīrtana. We were having every night, but many children told me that "I would like to come, but my parents won't let me come." Because they are saying gossip, rumors, things like this. This girl who we want to initiate, she would come every, every day, without fail, and her . . . even her parents would say: "Why are you going there? Everybody is talking about you." So socially they, maybe now they will change, but so far they are rejecting.

Śrutakīrti: That man yesterday . . . (indistinct) . . . he was saying in the newspaper, there's an article about us in the newspaper right here, that connected us with drugs.

Amogha: There's a magazine called Express, like Time magazine, News magazine, and it says, "Attention to the intelligence agency of this country, that the leader of the Hare Kṛṣṇa movement is coming here," and they should consider trying to stop you from coming here because it's possible this Hare Kṛṣṇa movement is connected with hippies and narcotics and things like this.

Prabhupāda: But after my coming they have not published it.

Amogha: Not yet. But one man came yesterday who was very interested, big local paper. And Associated Press International, the man in charge was in San Francisco for Ratha-yātrā, and he saw you there and took prasādam also. And he wants to take some color photographs for international coverage. I will invite him again. I think in Indonesia they're usually, they're a bit slow, so a week later they will publish.

Devotee: I washed it this morning (bead bag?)

Prabhupāda: Why don't you keep two is it very scarcity? . . . (indistinct)

Amogha: You wrote a letter to me from Sydney in which you said that the printing program is very nice, but by your experience, it takes much time and money. And how will we do saṅkīrtana and do prasādam distribution and printing all at the same time? And you said: "You can think this over with a cool head, and we will discuss more when we come."

Amogha: We can have translations from that girl's . . . (indistinct)

Prabhupāda: Yes that will . . . (indistinct)

Amogha: Only the translation we have done so far, some, it seems to me, not right. Although I can't read it, I've tried so many times to print it, but I can never get it printed. And it seems that if it was a good translation . . .

Amogha: Maybe on the street. Somebody wash clothes. Their standard of cleaning is very low. We can tell, because sometimes we ask their help to clean something, "Please make this very, very clean," and they . . . and it's not clean. There are intelligent people, though, in Jakarta. They have Theosophical Society with a large following, and there's many Buddhist people who are fairly intelligent.

Amogha: Today is Wednesday. They meet on Thursday. I'll go see them today.

Amogha: They meet at 6 o'clock, I think, and our meeting is 7 o'clock, so maybe I should invite them, because I don't think it would be time to go there. If you would like to stay a few more days, I can arrange many more meetings. (laughs)

Prabhupāda: (indistinct) . . . also they do not understand.

Amogha: In the Theosophical Society?

Amogha: Yes. Not everyone, but one leader I spoke to, he understood, and he liked it very much.

Amogha: I will call him.

Prabhupāda: The ḍāl, it does not boil.

Amogha: It's not good. What kind of ḍāl did they offer you, to you?

Amogha: I'll ask Śrutakīrti. I must go and pick some flowers for the garland. (offers obeisances) Shall we go to the same place for the walk? It is too far away?