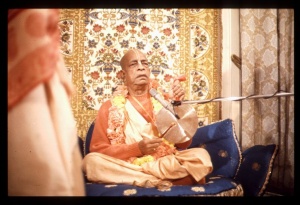 Prabhupāda: . . . have the right to become a brahmin.

Prabhupāda: But generally, unless they are very highly elevated, why they should be called . . . (break) . . . wanted to elevate them, harijanas.

Prabhupāda: But he did not know how to make them harijana. He was politically trying. These are old garments?

Prabhupāda: They are selling new.

Amogha: Yes. This is a very well attended market, this area.

Prabhupāda: Yes. I can see. When the market opens?

Devotee: It's a good system in a country with this weather, very hot in the afternoon, to close the business in the midday. Our visas are all completely . . . (indistinct)

Prabhupāda: (japa) This road is very nice. This road, very nice road. What is meaning of toko?

Devotee: If they say bookstore, they say toko booko.

Prabhupāda: These are wholesale merchants?

Amogha: It appears to be. Yes.

Amogha: Yes. I was there also.

Prabhupāda: These are all Oriental countries. Five thousand years ago this whole planet was India, Bhārata-varṣa. That we get from history, Mahābhārata. This planet name is Bhārata-varṣa.

Amogha: After King Parīkṣit, then it divided up, that soon after?

Prabhupāda: Divided? They are also already divided. But the culture diminished. Because the center of culture was India, Delhi. So as the power diminished, the maintenance of the culture diminished, and by contact with other types of aboriginal, they learned eating meat and gradually degraded. And they discovered different types of religion because . . . just like at the present moment the Christians are protesting why there should not be abortion.

Amogha: So there's no spiritual motive.

Prabhupāda: Later on it became political, because as soon as the spiritual power, culture, became diminished, the whole thing became material. So people wanted material advantage, so separated from Vedic culture. Just like Buddhism. Buddhism was a Hindu culture. But Lord Buddha wanted to stop animal sacrifice. In the Vedas, animal sacrifice is recommended under certain condition. Even denied that, "No, that also cannot be done." So therefore they are separate from Vedic culture. After all these, all these religious systems—Muhammadanism, Jewism, then Christianism, Buddhism—their history's not more than 2,000 years. And before 2,000 years, what was the culture?

Amogha: The Christians here get money from America. In Bali, where those many Hindus live, they convert many people by saying: "If you become a Christian, you'll have good economy with us."

Prabhupāda: And that is the Christian propaganda.

Prabhupāda: In India, everywhere. They cannot attract people by their philosophy. It is show money, "Yes, come on, take money."

(break) Very many meat shops. Rather this vegetable . . .

Amogha: It costs a lot of money. Meat is more expensive to eat. Actually, most people, mostly they eat vegetables because it is available. But there's much fish. There's much fish, and they carry around in the streets everywhere.

Devotee: In the Eastern countries usually people eat little bits of meat with their vegetable. It's only in the West that they eat steak.

Amogha: But in every restaurant they all have meat. Much chicken also. They raise chickens.

Tomorrow morning we have asked some Indian community leaders to come about 7 o'clock, because they want to be requested by you to do something to help make a temple or what you like. But they . . . apparently they feel unhappy because we have not met with the leaders and asked them to help.

Amogha: Well, actually that meeting with the Indians, they wanted you to eat some prasādam in the room and come inside and request, and ask you like that.

Prabhupāda: No, no. I cannot do that.

Devotee: No, he doesn't understand . . . the night that, the first gathering at the Indian man's home, they all wanted to meet with you then, but Amogha didn't know that. They were planning to come in the room and offer their services. But there was some mix-up, and they didn't understand. They thought they had been cut off.

Amogha: They told me they wanted you to go in the room for prasādam. But they wanted a meeting, and they didn't tell me. I didn't know.

Or if they do not carry out my order, then it will be offense. Why should they put themself in such risk? Generally it is the duty of the householder to offer, "Sir, what can I do for you?" Then I can request. And if, as a beggar, I request them and they deny, then that will be great offense for them. That will not good for them.

Amogha: We are almost there.

Prabhupāda: So you wanted to secure place here?

Amogha: Yes. They have a house in this area, but it is a bit far from the center of town.

Prabhupāda: Never mind. It is good quarter, you can take it.

Amogha: Okay. It is about one mile more, though.

Prabhupāda: This is also a center. It is congested.

Amogha: Yes. It is near a bus station also.