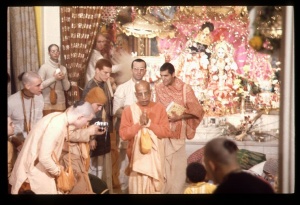 Prabhupāda: . . . things of value, they're disappearing. Just like formerly people used to have some dishes of valuable metals. Now it is plastic. This is the advancement.

Svarūpa Dāmodara: They call it convenience.

Svarūpa Dāmodara: They call it convenience.

Prabhupāda: Yes, convenience means going to hell. That's all. It is very convenient to go to hell. (japa) Everything synthetic. Huh? Cotton is disappearing.

Prabhupāda: Artificial. And the scientists, they are giving this clue, "Oh, now we have produced something very valuable. Take it."

Svarūpa Dāmodara: Yes, when Dupont made the first nylon, it was a great . . . praised all over the, all over the world . . .

Prabhupāda: What for? What for?

Svarūpa Dāmodara: Because they produced the synthetic fibers, nylons.

Prabhupāda: Useless. And big, big cars. They are charging thousands, thousands of dollars, but what it is? Tin car. As soon as the machine gone, nobody will pay for the tin even. Especially in this country, they are thrown away to the garbage. No value. (japa)

In India, we have seen, still they are going on. People stock metal utensils. You know.

Svarūpa Dāmodara: Yes, we use.

Prabhupāda: Never use this china clay. Never. No respectable gentleman will use china clay. Still. So if a poor family is in need of money, immediately he can take one Banarasi sārī, or some metal utensils to the pawn maker. He'll immediately offer some money: "Yes." So these are conveniences. Investment was in gold ornaments. Still we have seen that so many jewelry shop, silver dishes shop, ornament shop. Still. Every marriage, the father must give at least fifty tolās. I was not a rich man; still I had to give to my daughter fifty tolās of gold during marriage. Fifty tolās . . . two and a half tolās makes one ounce. So what is the value of fifty tolās?

Prabhupāda: Oh, five thousand dollars. She has got some assets. That is called strī-dhana. Strī-dhana means "woman's property." Nobody can touch it. Only, according to Manu-saṁhitā law, strī-dhana . . . now they are changing. Strī-dhana, the son cannot touch, the husband cannot touch. Nobody can touch. But after her death, the daughters will share that money. Because formerly, the daughters could not get share of the father's state.

Only the dowry which is given by the father at the time of her marriage. That much. But she could not claim any state share. Therefore at the time of marriage, the dowry by ornaments, sārīs . . . hundred pieces of sārī, if one is rich man; all Banarasi sārī, costly. And woman's nature is that if she gets good ornaments, sārīs, good food, she's satisfied. She doesn't want anything. She'll never become faithless to her husband.

So these things are disappearing. Now rich man, rich man's wife, no ornament. All widower. Only the widows, they were without ornaments. Any woman who has got husband must have ornaments. Otherwise, insult. So individual liberty, individual prosperity, everything is disappearing by the scientific improvement. That's all. This is the net result. Now in your country, that . . . what is that? Draft board? Eh?

Karandhara: They don't do it anymore.

Prabhupāda: Eh? They do not do it?

Prabhupāda: They stopped it.

Prabhupāda: Yes. Because they saw, "Now we are producing more hippies for this . . . only for, on account of this."

Svarūpa Dāmodara: So the, the material world itself is very temporary.

Svarūpa Dāmodara: The material world itself is temporary. So the scientists still make it much more temporary?

Svarūpa Dāmodara: By investing, by, by finding out the different ways of . . . they're called conveniences. So by producing these things makes much more comfortable.

Prabhupāda: Easier. Easier to die. They have invented the atomic. Very easy to kill. (japa)

Karandhara: It does not look well?

Svarūpa Dāmodara: So that is the property of the ocean.

Prabhupāda: No, everything has got some quality and beauty. Just like Cāṇakya Paṇḍita says, nārīṇāṁ bhūṣaṇaṁ patiḥ, that woman, the personal beauty is not beauty. When she has got a husband, then she's beauty. How scientific it is. All these girls in your country, without husband, they're all morose, unhappy. They have no fixity of husband. Is it not?

Prabhupāda: Yes. The woman population is greater everywhere, and if they have no husband, they're very sorry. I have studied in this country. They're very unhappy without husband. Therefore I introduced this marriage in our Society. Now in our Society see all the women with children, how happy they are.

Prabhupāda: Yes. They have got Kṛṣṇa, they have got husband, they have got children. Now, happy they are. They're working hard for beauty of the home, for the temple. And now last night that Mukunda's cousin-sister came. How unhappy she is.

Brahmānanda: Yes. You could also see the child.

Brahmānanda: The difference between that child and our children.

Brahmānanda: You could see immediately.

Prabhupāda: Cousin-sister. Without husband, woman is very, very unhappy. Therefore according to Vedic system the father has got a very responsible duty to get the daughter married. It is a responsibility of the father. In the absence of father—elder brother. Now the scientists have given them contraceptive. "Don't marry, and use contraceptive." This is scientific advancement. And the contraceptive-user of girls, they're never beautiful.

Natural beauty . . . natural beauty's lost. Did you mark it? Between a woman having natural children, her beauty's better than the girl using contraceptive. It is natural. As soon as you check natural system, you become in difficulty. The . . . still the system is current. Kṣatriyas, kings, when they are married . . . you have seen, Kṛṣṇa's father's marriage. So many women also were given.

Prabhupāda: Because always women population is greater than the man. So those who are kings, they could maintain more than one wife. So not only one wife; another three dozen maidservant. They were freely mixing, the king. They got also children. But they were not, I mean to say, eligible for throne. Only the married wife's son. This is . . . this was the system. Just like Vidura. Vidura happened to be a son of such maidservant. So she had . . . he had no claim on the throne. Dāsī-putra. They were called dāsī-putra. They're maintained, just like in royal family, but they have no claim on the throne. (japa)

Svarūpa Dāmodara: There are two scientists working on how to make . . .

Svarūpa Dāmodara: How to make chemicals for contraceptive. One is in Stanford. His name is Carl Geraldsey. And one is in Harvard. His name is Corey, E. J. Corey. They are quite famous now.

Prabhupāda: Huh. Because they gave contraceptive?

Svarūpa Dāmodara: Yes. They are trying to make compounds, steroids.

Prabhupāda: Scientist means they must do something mischievous. That's all.

Svarūpa Dāmodara: Ultimately, they're saying that, "In the future, we'll make tablets, scientists will make tablets. Just taking one or two tablets, and they will be satisfied, their hunger." So food will be very simplified.

Prabhupāda: But the food value will be taken by him. "Instead of paying to the stores, you pay us. We give you tablet."

Svarūpa Dāmodara: They're dreaming so many things.

Prabhupāda: "Idle brain is a devils' workshop." Because they have no Kṛṣṇa consciousness, their brain is a workshop of the devil. That's all. Harer nāma harer nāma . . . (CC Adi 17.21).

And without culture, men are becoming rogues and thieves, uncultured. The Communist movement. Atheistic . . . everywhere, nobody's happy. The government's duty should be . . . first duty should be that everyone is happy. That is described in the Śrīmad-Bhāgavatam, during the time of Mahārāja Yudhiṣṭhira. Even there was no natural disturbances—no excessive heat, no excessive cold, no anxiety. People are dying now out of anxieties. They're becoming mad, committing suicide, drinking liquors more and more. Just for anxiety. When they cannot solve any big problem, "Bring bottle." Is it not?

Now śāstra says, jalajā nava-lakṣāṇi (Padma Purāṇa). There are 900,000 forms of aquatics. So what the scientist says? How many there are?

Svarūpa Dāmodara: They have no number. They cannot count it. When we say, then they'll say: "How do you know?"

Prabhupāda: We have got our process. You do not know. You admit. That is Vedic knowledge. Everything is there. If you want to know, you have to spend so much money to study how many forms are there. But we believe in the Vedas. We get immediately the correct knowledge. Now you cannot challenge it, because you do not know. Neither you can know by research work.

Svarūpa Dāmodara: When a wave comes, they run this way, and when the wave goes down, they run down.

Prabhupāda: When the waves bring the food, so immediately they capture. So there is no scarcity of food, even for the small birds. And we are in scarcity; the scientist is manufacturing tablet.

Svarūpa Dāmodara: They're going to convert the wood, the big woods, to food also, by treating with the enzymes. That is one of the . . . (laughs)

Svarūpa Dāmodara: The wood that grows big, big trees, they said, in a few years, then these will be converted to food by treating with enzymes.

Prabhupāda: That means there will be no food, natural food. That is stated in Bhāgavata. You don't . . . you'll not get these grains, sugar, milk. This will be stopped. You have to eat woods. Yes. (chuckles) By your advancement of civilization, you have to eat woods.

Svarūpa Dāmodara: At the moment, scientists are doing so many things. They're having so many hopes. So in about fifty years . . .

Prabhupāda: There will be so much advancement that there will be no grains, (laughing) no milk.

Karandhara: They say it's unhealthy.

Prabhupāda: Ācchā? What is healthy? Meat?

Prabhupāda: No. It contains more fat. Milk means cow's milk. If you want to derive milk profit, then it is cow's milk. Otherwise, every animal has got milk. And next to cow's milk is goat's milk. Goat. Buffalo milk is not so nice.

Svarūpa Dāmodara: It's difficult to digest.

Prabhupāda: No, they therefore mix with water.

Svarūpa Dāmodara: In Manipur we use mostly buffalo milk, because cow's milk is not very plenty. Very expensive also.

Prabhupāda: Everywhere. In India, cows are disappearing by slaughterhouse.

Svarūpa Dāmodara: Yes. They can make.

Svarūpa Dāmodara: Yes. I think in Japan they get water from the ocean.

Svarūpa Dāmodara: It's a process. They remove the salt, and they use the water for drinking. But it is quite expensive.

Prabhupāda: Then what is the use? If people cannot provide it . . .?

Brahmānanda: It's not free. It's not provided freely.

Svarūpa Dāmodara: They'll say when the necessity arises, they'll do it.

Brahmānanda: "In the future." It's going to be a wonderful future.

Svarūpa Dāmodara: So, so long as the future is there, they have something to say. (laughter) (end)