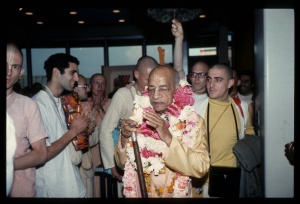 Translation: "O Kṛṣṇa, O friend of Arjuna, O chief amongst the descendants of Vṛṣṇi, You are the destroyer of those political parties which are disturbing elements on this earth. Your prowess never deteriorates. You are the proprietor of the transcendental abode, and You descend to relieve the distresses of the cows, the brahmins and the devotees. You possess all mystic powers, and You are the preceptor of the entire universe. You are the Almighty God, and I offer You my respectful obeisances."

Prabhupāda: So Lord Kṛṣṇa is addressed here as kṛṣṇa-sakha. Although Arjuna is Kuntī's son, subordinate, but she knows that Kṛṣṇa is more intimately related with Arjuna than herself. She knows that. Another kṛṣṇa-sakha means Kṛṣṇā. Kṛṣṇā is the name of Draupadī. So Kṛṣṇa saved Draupadī from insult. She was attempted to be naked by Duryodhana and Karṇa, but Kṛṣṇa saved her. So in that sense also Kṛṣṇa, kṛṣṇa-sakha.

Vṛṣṇy-ṛṣabha. Ṛṣabha, the chief. The best man is called ṛṣabha. So in the Vṛṣṇi dynasty, Kṛṣṇa is the chief. Because Kṛṣṇa appeared in the Vṛṣṇi dynasty, therefore the dynasty become famous. That is already discussed previously. Malaya-candana. Candana. Just the sandalwood. Because sandal is produced in the Malaya—Malaysia now, the name—therefore it is called malaya-candana. Or sometimes it is produced in the Malaya Hill. There is hill, another.

So ṛṣabhāvani-dhrug rājanya. Avani-dhruk. Dhruk means rebellious. Actually a . . . a king should be representative of God. Representative of . . . the king's honor, in every country, kings, king is honored very gorgeously. Why? He's also human being, and the citizens are also human being. Why the king is so honored? Just like spiritual master. A spiritual master is honored. Not only honored—in the śāstra it is said, nāvamanyeta karhicit. Ācāryaṁ māṁ vijānīyān nāvamanyeta karhicit (SB 11.17.27).

The spiritual master should not be, I mean to say, taken as ordinary human being. And the king also, practically we see that we do not treat a king or a president like ordinary human being. What is the reason? What is the reason? The reason is that the king . . . King's another name is naradeva, "God in human form." Naradeva. So king is honored because a king is supposed to be representative of God. Therefore he's honored. His business is . . .

Now, why one person should be worshiped by so many persons? Because the one person provides so many person. Eko yo bahūnāṁ vidadhāti kāmān (Kaṭha Upaniṣad 2.2.13). God is also person. He's one; we are many. God is worshiped because He provides everyone. He gives food, maintenance. All the necessities of life, God is supplying. Therefore He should be worshiped. We require water; God has given the oceans of water, stocked. Utilize it. How nicely arranged: clear water, mixed with salt so that it will not decompose. Such arrangement. And when you require drinking water, the same water is distilled. By God's arrangement, the sunshine evaporates the water, took it on the high sky, and then distributes clear, distilled water.

Therefore original supplier is God. Eko yo bahūnāṁ vidadhāti kāmān. He's person. He has got brain. He knows that all of them will require everything, such-and-such thing—heat, light, water. Without water, you cannot produce foodstuff. Even the animal-eaters, without God's arrangement, how he can eat animal? The animal also must be provided with food, with grass; then you can take it to the slaughterhouse by your expert intelligence. God is supplying food. Still you are creating a rebellious condition. That's an avani-dhruk. These rascals who are going against the law of God, they're rebellious. So they're rebellious. The king's duty is to see as representative of Kṛṣṇa, as representative of God. Otherwise he . . . what right he has got to take so much honor from the citizens? He has no right.

And because the kings—formerly every country there were kings, monarchy—they violated, they rebelled against God, they became themselves God that, "I have got so much property, kingdom. I am God. I am the Lord of all I survey." So when they usurped the power of God, the all monarchies in the world is now finished. Because they did not act as representative of God. They thought their personal property the kingdom. No. That is not actually fact. Fact is everything belongs to God. Īśāvāsyam idaṁ sarvam (ISO 1).

The Māyāvādī, they cannot understand it that, "Because a spiritual master has to be accepted as God, therefore I have become spiritual master—I have become God." That is rebellious. This is rebellious. God gives you a position, and if you want to usurp His power unnecessarily, which you cannot, then you are fool, rascal, you are rebellious. He requires punishment. Punishment. Therefore it is said that avani-dhrug rājanya-vaṁśa-dahana: "Therefore You descend to kill all these rascals who claim Your position, rebellious." That is natural. Just like all subordinate kings. There is one emperor, and there are subordinate kings. Sometimes the subordinate kings claim, "Now we shall not give tax." In India it so happened. Everywhere it so happens. The subordinate kings, zamindars, landholders, sometimes they think, "Oh, why shall I give tax?" Then it is rebellious.

So Kṛṣṇa's one business is to kill these rebellious persons who deny the supremacy of God, who declare himself as God. Therefore it is said, avani-dhruk. In the . . . on the surface of the globe, those who are rebellious, rājanya-vaṁśa-dahana, so He kills. He burns them. Apavarga-vīrya, anapa-varga, anapavarga-vīrya. Anapa. Apavarga means . . . it is said anapavarga?

So apav . . . this word is meant for this purpose, that without working, you cannot live even. You cannot maintain your body. Therefore it is called pariśrama. Pa. Pa means pariśrama, to labor hard. You cannot get your subs . . . even if you are a lion, a king, a very powerful, still you have to find out your bread in the jungle, not that . . . it is said, na hi suptasya siṁhasya, praviśanti mukhe mṛgāḥ. Suptasya siṁhasya. Supta means sleeping. Sleeping. A lion, if he thinks that, "I am the king of the forest, so let me sleep, and in my mouth all the animals will come." No, sir, it is not possible. You must find out your food, although you are lion. So everyone has to find out—with great difficulty. The lion, although so powerful, he has to find out his food—another animal to eat—with great difficulty. Not so easily.

So ap . . . pavarga. Pa means labor, and pha means foam, the foam. When you work very hard, from your mouth a kind of foam comes out. Pha. Pa, pha, ba. And in spite of so much hard labor, it is ba. Ba means birth, futile, useless. Pa, pha, ba. And bha, bha means fear, bhaya. Bhaya, fear. Although you are working so hard, there is always some fearfulness: "Now things will be done like this" or "not like this," fearful. That is the nature. Āhāra-nidrā-bhaya-maithuna (Hitopadeśa 25). Bhaya. This life, this body, material body, means eating, sleeping and fearing. This is one of the symptom. Although I am eating very nicely, I am thinking whether I am overeating so that I may not feel sick. So bhaya is always there. A bird, you'll see eating and looking this way, that way, bhaya—if some enemy is not coming. So this is bha.

Prabhupāda: That is spiritual world. Pavarga means accompanied by all these things, and apavarga means just the opposite. Just the opposite. Therefore Kṛṣṇa's name is anapavarga-vīrya. He shows you the path how you become anapavarga. Nāpavarga, anapavarga. Kṛṣṇa says here, tyaktvā dehaṁ punar janma naiti (BG 4.9). Why this pavarga? Why these five kinds of tribulation? Because you have got this material body. As soon as you accept a material body—it doesn't matter whether President Nixon's body or a common man's body—you have to pass through these pavargas: pa, pha, ba, bha, ma. Either you are demigod or a human being or an animal or an insect or Brahmā—whatever you may be—as soon as you have got this material body, you have to go through these tribulations. This is called material existence. And apavarga means just the opposite. That . . . for that purpose Kṛṣṇa comes, to give you the path of anapavarga. Nāpavarga . . . anapavarga is the path.

So you have to accept. Kṛṣṇa says, very frankly says: "Surrender unto Me, I give you anapavarga." Ahaṁ tvāṁ sarva-pāpebhyo mokṣa yāmi (BG 18.66): "I shall give you protection." So He is the power for this purpose, and govinda . . . Govinda means He is the giver of pleasure to the cows and to the senses. Govinda. Govinda, go-dvija-sura-arti-hara-avatāra. Avatāra means incarnation. Govinda, govindam ādi-puruṣaṁ tam ahaṁ bhajāmi. He's the ādi-puruṣa. Aham ādir hi devānām (BG 10.2), He is the original person, even of the demigods, Brahmā, Viṣṇu. People may not misunderstand that Brahmā, Viṣṇu, Maheśvara, they are original. No. Kṛṣṇa says: "They are not original, Brahmā, Viṣṇu, Maheśvara." Aham ādir hi devānām: "I am the original person, above the . . . of these demigods also." Therefore, we repeatedly say that we worship that ādi-puruṣaṁ, the original person, govindam ādi-puruṣaṁ tam ahaṁ bhajāmi. Not secondary; the first, the first, original person.

So Govinda . . . so what is the business of Govinda? Now, go-dvija-surārti-harāvatāra. Surārti, go. This demonic world is the greatest enemy of cows. Just see how they are maintaining hundreds and thousands of slaughterhouse. Hundreds and thousands of slaughterhouse. Innocent animals, giving you milk, the most important foodstuff. Even after death, it is giving you its skin for your shoes, and you are so rascal that you are killing. And you want to be happy in this world. You see? How sinful they are! They have no consideration that this animal . . .

Why cow protection is so much advocated? Because it is very, very important. Therefore . . . there is no such injunction that, "You don't eat the flesh of a tiger." You can eat. Because those who are meat-eaters, those who are meat-eaters, they have been recommended to eat the flesh of goats or other lower animals—sometimes dogs also they eat, or the hogs—you can eat. But never the flesh of cows. So, innocent animal, the most important animal, giving service even after death . . . while living, giving service, so important service, giving you milk; even after death she is giving service by supplying the skin, the hoof, the horn. You utilize in so many ways. But still, the present human society is so ungrateful and rascal that they are killing cows. So Kṛṣṇa comes to punish them, these rascals. Therefore it is said that go-dvija-surārti-hara. Kṛṣṇa comes to . . . therefore we worship Kṛṣṇa, namo brahmaṇya-devāya go-brāhmaṇa-hitāya ca. brahmin.

So to make a perfect human society, there must be protection of the go-dvija. Dvija means brahmin. brahmin means one who knows Brahman, God. These two classes must be given first protection. Therefore Kṛṣṇa is worshiped with this word:

See, the same thing is there. Govindāya, go-dvija arti-hara. Dvija. Dvija, when the brahmin class, when the cows, they are too much troubled by these rascal demon, and Kṛṣṇa comes, yadā yadā hi dharmasya glānir bhavati bhārata, abhyutthānam adharmasya (BG 4.7). These are adharmas.

So in this age, Kali-yuga, the people are so sinful, so suffering also, therefore Kṛṣṇa has incarnated in the form of His name: