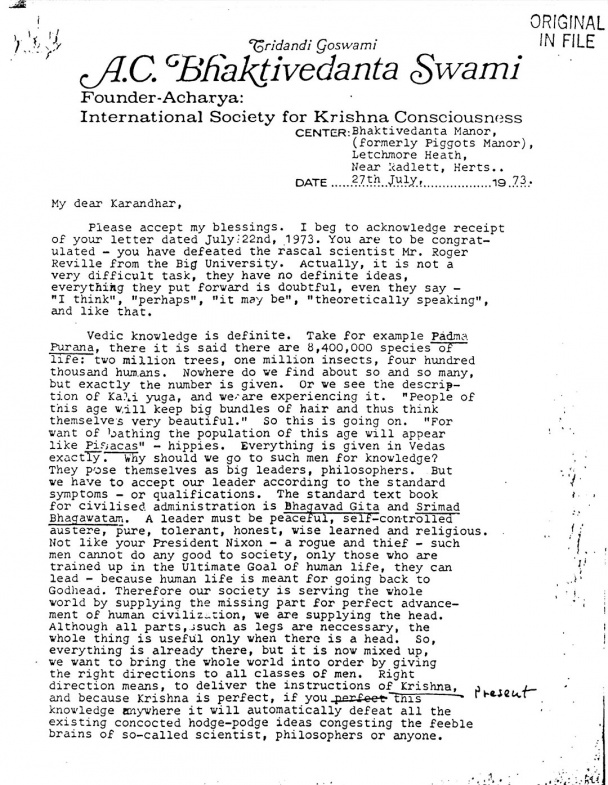 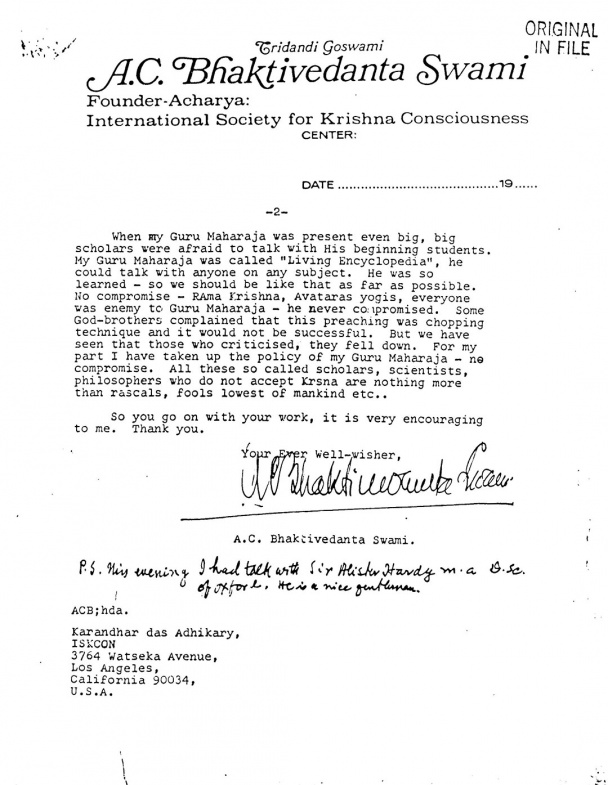 Please accept my blessings. I beg to acknowledge receipt of your letter dated July 22nd, 1973. You are to be congratulated - you have defeated the rascal scientist Mr. Roger Reville from the Big University. Actually, it is not a very difficult task, they have no definite ideas, everything they put forward is doubtful, even they say — "I think", "perhaps", "it may be", "theoretically speaking", and like that.

Vedic knowledge is definite. Take for example Padma Purāṇa, there it is said there are 8,400,000 species of life: two million trees, one million insects, four hundred thousand humans. Nowhere do we find about so and so many, but exactly the number is given. Or we see the description of Kali yuga, and we are experiencing it. "People of this age will keep big bundles of hair and thus think themselves very beautiful." So this is going on. "For want of bathing the population of this age will appear like Pisacas" - hippies. Everything is given in Vedas exactly. Why should we go to such men for knowledge? They pose themselves as big leaders, philosophers. But we have to accept our leader according to the standard symptoms - or qualifications. The standard text book for civilized administration is Bhagavad Gita and Srimad-Bhagawatam. A leader must be peaceful, self-controlled austere, pure, tolerant, honest, wise learned and religious. Not like your President Nixon - a rogue and thief - such men cannot do any good to society, only those who are trained up in the Ultimate Goal of human life, they can lead - because human life is meant for going back to Godhead. Therefore our society is serving the whole world by supplying the missing part for perfect advancement of human civilization, we are supplying the head. Although all parts, such as legs are necessary, the whole thing is useful only when there is a head. So, everything is already there but it is now mixed up, we want to bring the whole world in to order by giving the right directions to all classes of men. Right direction means, to deliver the instructions of Krishna, and because Krishna is perfect, if you present [handwritten] this knowledge anywhere it will automatically defeat all the existing concocted hodge-podge ideas congesting the feeble brains of so-called scientist, philosophers or anyone.

When my Guru Maharaja was present even big, big scholars were afraid to talk with His beginning students. My Guru Maharaja was called "Living Encyclopedia", he could talk with anyone on any subject. He was so learned - so we should be like that as far as possible. No compromise - Rama Krishna, Avataras, yogis, everyone was enemy to Guru Maharaja - he never compromised. Some God-brothers complained that this preaching was chopping technique and it would not be successful. But we have seen that those who criticised, they fell down. For my part I have taken up the policy of my Guru Maharaja - no compromise. All these so called scholars, scientists, philosophers who do not accept Krsna are nothing more than rascals, fools lowest of mankind etc..

So you go on with your work, it is very encouraging to me. Thank you.

P.S. This evening I had talk with Sir Alister Hardy M.A. D.Sc. of Oxford. He is a nice gentleman. [handwritten]