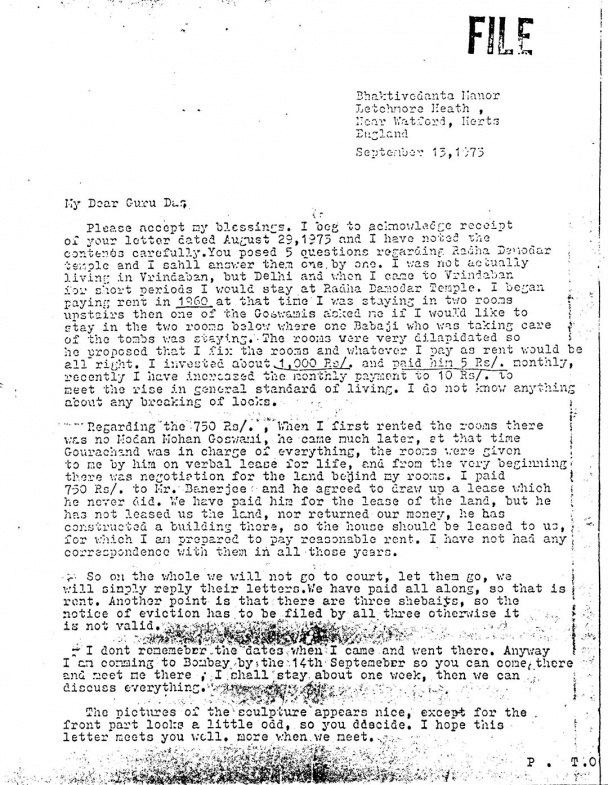 Please accept my blessings. I beg to acknowledge receipt of your letter dated August 29, 1975 and I have noted the contents carefully. You posed 5 questions regarding Radha Damodar temple and I shall answer them one by one. I was not actually living in Vrindaban, but Delhi and when I came to Vrindaban for short periods I would stay at Radha Damodar Temple. I began paying rent in 1960 at that time I was staying in two rooms upstairs then one of the Goswamis asked me if I would like to stay in the two rooms below where one Babaji who was taking care of the tombs was staying. The rooms were very dilapidated so he proposed that I fix the rooms and whatever I pay as rent would be all right. I invested about 1,000 Rs/. and paid him 5 Rs/. monthly, recently I have increased the monthly payment to 10 Rs/. to meet the rise in general standard of living. I do not know anything about any breaking of looks.

Regarding the 750 Rs/., when I first rented the rooms there was no Modan Mohan Goswami, he came much later, at that time Gourachand was in charge of everything, the rooms were given to me by him on verbal lease for life, and from the very beginning there was negotiation for the land behind my rooms. I paid 750 Rs/. to Mr. Banerjee and he agreed to draw up a lease which he never did. We have paid him for the lease of the land, but he has not leased us the land, nor returned our money, he has constructed a building there, so the house should be leased to us, for which I am prepared to pay reasonable rent. I have not had any correspondence with them in all these years.

So on the whole we will not go to court, let them go, we will simply reply their letters. We have paid all along, so that is rent. Another point is that there are three shebaits, so the notice of eviction has to be filed by all three otherwise it is not valid.

I don't remember the dates when I came and went there. Anyway I am coming to Bombay by the 14th September so you can come there and meet me there, I shall stay about one week, then we can discuss everything.

The pictures of the sculpture appears nice, except for the front part looks a little odd, so you decide. I hope this letter meets you well, more when we meet.