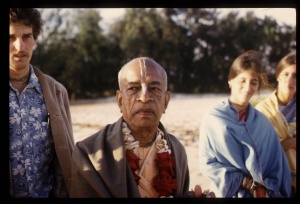 Jaya-hari: Prabhupāda?, this morning you talked about astrology in your lecture. Is this accepted in the Vedic scripture and by the gurus?

Prabhupāda: Oh, yes. Astrology means . . . that is also Vedic. Jyotir-veda. Jyotir-veda. That is also part of the Vedas. (break) The brāhmins, they learn these three things: astrology and medicine. These two things. A brāhmin is supposed to go to every householder's place, and he will inform, "Today is such-and-such tithi. The such-and-such thing should be done."

And if required, if somebody inquires about "Now I am going to that place. What will happen? Just find out the auspicious moment," so they will give him. Still it is current. It may be wrongly done or rightly, but the system is still there, astrologer. The king should be always accompanied by a first-class astrologer. (break) . . . there is a whole street, both sides simply astrology. (break) . . . good astrologers.

Prabhupāda: Where is our scientist?

Prabhupāda: Oh, how are you? Thank you very much. Come on. How are you? Feeling all right?

Svarūpa Dāmodara: I brought a friend, Śrīla Prabhupāda, from Calcutta. He was my class friend in Calcutta. He is from St. Xavier's College. He graduated.

Sujit: Yes bengali. Not original though.

Prabhupada: Oh, then where are you from?

Sujit: Stayed in Bangladesh but didn't got opportunity to get my study in Bengali.

Prabhupada: No no, where is your ancestral home?

Sujit: Ancestral home is in Calcutta.

Sujit: Where are you from? Ballygunge?

Prabhupāda: Sujit, oh. (Bengali: For how many days you are staying here?

Sujit: It's about six years since I have come here.

Prabhupada: Oh! What do you do here?

Sujit: Did my graduation from science college. Then I taught chemistry for one year in St

Prabhupada: Chemistry, science they teach well in St.Xaviers. I heard it. I am from Scottish Church.

Sujit: What is my opinion?

Prabhupāda: No. I am asking scientist.

Svarūpa Dāmodara: First of all I did not believe astrology in the beginning. I thought it was a pseudo science.

Prabhupāda: No, you may think, but what is the opinion of the scientist?

Svarūpa Dāmodara: Oh, scientists would say that there is no background.

Prabhupāda: So how it so happens?

Svarūpa Dāmodara: Because they say something which cannot be proved by experimental science, that does not work, calling science.

Prabhupāda: So then how do you say that life is from matter? That cannot be proved by experiment.

Prabhupāda: Then again, "Going to prove." They cannot prove, they'll not not admit it.

Sujit: See, astrology, I think, what he said is half true. Astrology is a science, but it is not an exact science like mathematics and chemistry.

Svarūpa Dāmodara: To calculate the planetary . . .

Sujit: It is from astronomy.

Prabhupāda: Astronomy, yes. Astrology is the part of astronomy. Yes.

Sujit: They are proving a lot of things. They are calculating when a certain star can be in certain positions.

Svarūpa Dāmodara: No, that can be done.

Sujit: Yes, it's being done.

Prabhupāda: So our astrology is calculated by the position of the stars.

Prabhupāda: By astronomy you calculate the position of the star, and they know, "If the star is in such-and-such position, the result will be like this." That is astrology.

Svarūpa Dāmodara: This looks like collecting some facts from some experience.

Prabhupāda: No, no. It is calculated by the astral movement. It is a great science. People do not know it now.

Svarūpa Dāmodara: So Wolfe Prabhu was telling me that, "So we don't believe in astrology, but when Śrīla Prabhupāda says, then you believe." So . . .

Prabhupāda: No. We believe in astrology. But because it is a difficult science, people do not understand it properly. That is another thing. In my practical life I see. In my horoscope, everything is written, what I am doing. Everything written. So . . .

Svarūpa Dāmodara: That would be called like genius. Sometimes. If somebody can predict what is going to happen in the future, can be, just like, taken . . .

Prabhupāda: No, these astrologers can give everyone exact, the history of life, what is going to happen, what happened.

Svarūpa Dāmodara: But it is true, though, Śrīla Prabhupāda, in our family life, when we want to do something, they always go to an astrologer.