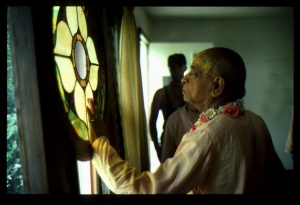 Pradyumna: Should be "produced."

Prabhupāda: "Begotten." It should be "begotten." Who has corrected?

Prabhupāda: Hm. Sa uttarasya tanayām. Mahārāja Parīkṣit, his mother's name was Uttarā, Uttarā. Means King Virāṭa, he had two issues—one son, one daughter. The son's name was Uttara and the daughter's name was Uttarā. This Uttarā was taught dancing by Arjuna. When Arjuna was staying at Mahārāja Virāṭa's house as a ordinary dancing master, they did not know that he is Arjuna. Because the promise was for one year, they should remain incognito. If they are detected, then again for twelve years they will be banished.

So Arjuna, Bhīma and others, they took different types of services in the house, palace, of Mahārāja Uttarā . . . er, Mahārāja Virāṭa. So he was appointed as a dancing master, teacher, to the daughter, Uttarā. Just see. Arjuna was a great warrior, and he was expert dancing master also. So when it was disclosed that, "These servants, they are the Pāṇḍavas. They remained here as ordinary servant," so Mahārāja Virāṭa was very much pleased that, "Such exalted persons are living in my house incognito." So he offered Uttarā to Arjuna that, "You marry my daughter. You have taught her dancing." So Arjuna said: "How can I marry her? I am teacher, and she is my disciple. She is my daughter. How can I marry her?" Then Arjuna said that, "If you want to keep this daughter in our family, I have got a grown-up son, sixteen years old." That means Abhimanyu, the son of Subhadrā, this Subhadrā: Kṛṣṇa, Balarāma, Subhadrā. So Subhadrā was married to Arjuna, and the son was Abhimanyu. So Uttarā was married to Abhimanyu, and the son was Mahārāja Parīkṣit.

Abhimanyu was just married and the war was declared. So when Abhimanyu had to go to fight, so he went in fight in the Battlefield of Kurukṣetra on behalf of his father. But he never returned. He died there. So Uttarā was pregnant, and Mahārāja Parīkṣit was within the womb. But the opposite party, they killed. Last killing was five sons of Pāṇḍavas. They were sleeping, and Aśvatthāmā, just to satisfy Duryodhana, he killed these sons while they were sleeping, most abominable, and brought the heads to Duryodhana, "Now I have finished the Kuru . . ." So Duryodhana could understand that "They are not the heads of the Pāṇḍavas, but their sons." So out of disappointment that "Our whole family is now finished," he died.

So only Mahārāja Parīkṣit was in the womb of his mother, and that was also attempted to be killed by brahmāstra. Brahmāstra is almost similar to the atomic weapon. And the brahmāstra, the specific function of brahmāstra is that when this weapon is released, it will kill the particular man wherever he is; it will go there and kill him. It doesn't matter whether he is in front or in somewhere. The weapon is so powerful that simply by mantra, you release it, and it will kill your enemy, wherever he is. So one brahmāstra was released to kill this child, baby, within the womb, embryo, to kill. And at that time Uttarā felt that her pregnancy is going to be, what is called, discharged.

So immediately she approached Kṛṣṇa that, "I am feeling like that, miscarrying. Please save me." So at that time Kṛṣṇa entered the womb of Uttarā and saved the child from the brahmāstra. So Mahārāja Parīkṣit is such a devotee that he was protected from the embryo by Kṛṣṇa. Therefore Śukadeva Gosvāmī addressed, mahā-pauriśika: "You are great personality." So this Mahārāja Parīkṣit was again cursed by a brāhmin. He could retaliate that, but he did not do so, just to offer respect to the brāhmin. He considered himself offender. That is last stage. And because he was cursed by a brāhmin at the last stage of his life, seven days, he heard Śrīmad-Bhāgavatam from Śukadeva Gosvāmī. Therefore we have got this book. This is the story.

(aside) You can read the Janamejaya paragraph.

Pradyumna: "Janamejaya: One of the rājarṣi kings and the famous son of Mahārāja Parīkṣit. His mother's name is Irāvatī, or according to some, Mādravatī. Mahārāja Janamejaya begot two sons, of the names Jñātānīka and Śaṅkukarṇa. He celebrated several sacrifices in the Kurukṣetra pilgrimage. And he had three younger brothers, named Śrutasena, Ugrasena and Bhīmasena the second. He invaded Takṣalā, or Ajanta, and he decided to avenge the unlawful curse upon his great father, Mahārāja Parīkṣit."

Prabhupāda: Yes. Mahārāja Parīkṣit was cursed by a brāhmin boy, not even twelve years old. When he heard that his father was insulted . . . one muni, he was in meditation, and Mahārāja Parīkṣit was in the forest, hunting. So he was very much thirsty. So in those days in the forest there were many hermitage. Saintly persons, sages used to live. So he entered one of them and asked for water. But the muni was great meditation. He could not hear him, receive the king. So he felt insulted that, "I asked water. This man is silent." So there was a dead snake; so out of anger he took the dead snakes and round, round wrapped him and went away.

So this news was spread, and his son was playing, and as soon as he heard that, "My father has been insulted in this way," he became very angry and cursed him immediately that, "This snake . . . or a snake would bite this king and he will die out of snake bite." So . . . and then again he came to his father. He was crying. The father . . . at that time the meditation of the father was broken, "Why, my son, you are crying?" and "You have been insulted by Mahārāja Parīkṣit. I have cursed him like this." "Oh," he became aston . . . "Oh, what you have done, wrong thing? You have cursed Mahārāja Parīkṣit? Oh. The greatest blame will be on the brāhmin society. The Kali-yuga will begin, begins deterioration of the brāhmin community. You are the first." So one thing is that even a child born of a brāhmin was so powerful that because he cursed Mahārāja Parīkṣit to die out of snake bite, it could not be withdrawn. He died. Just see how much brahminical power was that time. Even a child, what to speak of grown-up.

So in those days, as in the first verse we learn, dvija-varya-śikṣayā. The . . . actually, the brāhmins, they were controlling the state, but not directly, not sitting on the throne, but giving the kings good advice according to śāstra that, "You rule over like this. This is the process." And the kings would abide by . . . although the monarchy was there, but they were not irresponsible. First of all, the king was trained and educated perfectly. Therefore it is called dvija-varya-śikṣayā. Yesterday I explained, dvija, the twice-born brāhmaṇa; and again it is added with another word, varya. Varya means the first class, not third class. First-class man, dvija-varya-śikṣayā, they used to teach. They used to advise. And if the king was worthless, sometimes they would kill the king. And next son, his son would take possession.

That was done in the case of Mahārāja Veṇa. Mahārāja Veṇa, he was upstart. He was born of a low-class mother, so he became so upstart that in his boyhood he was playing with friends, and if there was some quarrel, he would kill such friend. So his father became so disgusted, tried to reform him in so many ways, but he could not be reformed. The father, Mahārāja Aṅga, he left the kingdom all of a sudden, being disgusted.

Then the brāhmins asked the king that, "You are not ruling very nicely. You have stopped all religious function. This is not good for the people, neither for you." They first of all tried to pacify him by nice instruction. But the king said: "You brāhmins, you do not know me very well. I am God," and this and that. Then he was killed by the brāhmins. You know that Jamadagni, Paraśurāma, when he saw that the kings were not responsible, he killed the whole kṣatriya family for twenty-one times. So that was the government. If the brāhmins would see that the kṣatriyas, the kings, were not ruling properly according to the Vedic principle, sometimes they would kill the king.

So Mahārāja Parīkṣit was also killed, but not for his fault. There was, of course, little fault, that he took a . . . that is Kṛṣṇa's arrangement. He was to go, leave this world, so that Bhāgavata may be spoken and people would derive benefit out of it. Otherwise, Mahārāja Parīkṣit could retaliate. He was so powerful devotee. But he did not.

(aside) So go on reading.

Prabhupāda: This sarpa-yajña . . . because his father, Mahārāja Parīkṣit, died of a snake bite, so he performed a yajña that, "All the snakes within this universe must die now." That was his determination. So he was performing such yajña that all the snakes, they were coming and falling on the fire. On the fire. So there was such powerful mantras that one could do that. These things are now forgotten. Nobody knows. Nobody can believe. But it was possible by the brāhmaṇas, by chanting the Vedic mantra, they could do anything they like. That was the yajña performance. Go on.

Prabhupāda: Yes. Although he was determined to kill, so he was requested by many demigods, saintly persons, "Just for one snake's fault"—that was also destination, destined—"you cannot kill all the species of snake." Then it was stopped. Then?

Pradyumna: "But despite stopping the sacrifice, he satisfied everyone concerned in the sacrifice by rewarding them properly and stopping further procedure of the sacrifice. In the ceremony, Mahāmuni Vyāsadeva also was present, and he personally narrated the history of the Battle of Kurukṣetra before the king. Later on, by the order of Vyāsadeva, his disciple Vaiśampāyana narrated before the king the subject matter of Mahābhārata.

He was much affected by his great father's untimely death and was very anxious to see him again, and he expressed his desire before the great sage Vyāsadeva. And Vyāsadeva also fulfilled his desire. His father was present before him, and he worshiped both his father and Vyāsadeva with great respect and pomp. Being fully satisfied, he made charities most munificently to the brāhmaṇas present in the sacrifice."

Prabhupāda: You can read another verse.