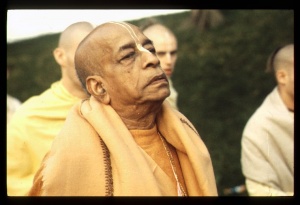 Prabhupāda: So, the beads are chanted?

Devotee: You said they would be chanted during the ceremony.

Prabhupāda: You told, not, "it will be finished. There is time." All right, chant mantra. Chant mantra. You chant. Finish, finish. Please chant. Give me some. How many there are?

Prabhupāda: Give me three.

Prabhupāda: I shall explain later on. Let me . . . where is the list of name?

Devotee: It's there in the corner of your seat.

Prabhupāda: Come here. What is this? What is the name.

Prabhupāda: Call. Who is Donnie?

Pradyumna: His name is Dhanur-dhara.

Prabhupāda: So you know the rules and regulations? Where is your kunti? Is there?

Devotee: There, on the plate.

Prabhupāda: So why it is not given? Just get all them. You do not know this?

Prabhupāda: No, no. Before. Everyone should have. Go on with it. (devotees chant japa) So, you know the rules and regulation?

Prabhupāda: What are they?

Donnie: Follow the four regulative principles, which are no meat-eating, no illicit sex, no intoxication and no gambling, and chant at least sixteen rounds a day.

Prabhupāda: Thank you. (aside) What is it?

Prabhupāda: Your spiritual name is Dhanur-dhara, "Who can distribute riches." Come on. Hare Kṛṣṇa. No name?

Prabhupāda: Hmm. What are the rules and regulation? (devotee offers guru-dakṣiṇā) Oh!

Prabhupāda: Very good collector (laughter), first class (laughter). So each, every one of you must collect like this and bring it in the evening.

Prabhupāda: Thank you. Gajahanta. Gaja means "Elephant, who can kill elephant." The senses are like elephants, very strong, so you have to kill them. Come on.

Prabhupāda: You know the rules and regulations? What is that?

Bill: No illicit sex, no intoxication, no gambling and no meat-eating, and chant at least sixteen rounds.

Prabhupāda: Goloka-vāsanā, "Who resides in Goloka Vṛndāvana." Come on.

Prabhupāda: Like cats, dogs, birds, beasts, we have satisfied our senses in so many life. Why not regulate in one life and go back to home, back to Godhead? If you cannot do this simple thing, austerity—it is not difficult—then how you can expect to go back to home, back to Godhead? So one should always think that this sense gratification business, we have done in so many lives, 8,400,000 species of life. Āhāra-nidrā-bhaya-maithunaṁ ca (Hitopadeśa). Eating, sleeping, mating and fearing, this is in every life. There is no exception. So in this life, human life, if you are actually serious, restrict. Then life is successful. So, your name is . . .

Prabhupāda: (chants japa) So, you know the rules and regulations?

Ron: No illicit sex life, no meat-eating, no intoxication and no gambling.

Prabhupāda: This is for Kathy?

Prabhupāda: What are the rules and regulations?

Kathy: No illicit sex, no meat-eating, no intoxication and no gambling.

Prabhupāda: So your spiritual name is Kajjalī dāsī. Kṛṣṇa's, what is called? What?

Prabhupāda: Anjan. What is the English, I want to know.

Prabhupāda: Bon? The kind of ointment which Kṛṣṇa uses. So you'll be always near the eyes of Kṛṣṇa.

Prabhupāda: So, now you can perform, and let us go.

Prabhupāda: So you can keep this money? (break) Six principles will increase your devotional service. The first principle is utsāhāt. Utsāhāt means "Enthusiasm." One must be determined that, "This life I shall not die like cats and dogs. This life I shall die in such a way that immediately I go to Kṛṣṇa." That is stated in the . . . tyaktvā dehaṁ punar janma naiti (BG 4.9). This generally transmigration takes place in so many different varieties of life, but one who has perfected his devotional life, he immediately, after death, he goes to Kṛṣṇa. Tyaktvā dehaṁ punar janma naiti mām eti. So this is the determination, that this life. That is called utsāhāt, enthusiasm. One should be very much enthused, "Oh, I am going to Kṛṣṇa, in the spiritual world." How much enthusiasm you should feel. So that is utsāhāt. And dhairyāt—and one has to become very tolerant, because so many things will disturb. Caitanya Mahaprābhu therefore said that, tṛṇād api sunīcena, taror api sahiṣṇunā (Śikṣāṣṭaka 3). We have to tolerate. We have to do our business. Just like Prahlāda Mahārāja. So much tribulation, even his father became enemy. So Kṛṣṇa consciousness is like that—even one's father becomes enemy, what to speak of others. You will be criticized, you will chastised, you will put into inconvenience, you will be arrested by police, so many things, but one has to tolerate. Utsāhāt dhairyāt. Tat-tat-karma-pravartanāt (Upadeśāmṛta 3). But the duties must be done.

The sixteen rounds must be chanted. Rise early in the morning, go . . . all the duties must be done. Tat-tat-karma-pravartanāt. Sato vṛtteḥ, and one must be very honest, not dishonest. Dishonest men cannot go to back to home, back to Godhead. That is false. God is pure. One must be very, very pure. A thing which is not fire, it cannot be allowed to enter into the fire. One must become fire; then there is no trouble. Fire can enter fire. So, sato vṛtteḥ sādhu-saṅga, and always keep company with devotees. Don't keep company with nondevotee. Then it . . . everything will be spoiled. Sato vṛtteḥ, sādhu-saṅga, ṣaḍbhir bhaktiḥ. Saḍbhir, six. Utsāhāt, dhairyāt, niścayāt, firm conviction. Utsāhāt, dhairyāt, niścayāt, tat-tat-karma-pravartanāt, sato vṛtteḥ sādhu-saṅga (Upadeśāmṛta 3). Six. If you keep these six principles always before you, you'll never fail; you'll make progress. Thank you very much.