740207 - Letter to Guptaji written from Vrndavana 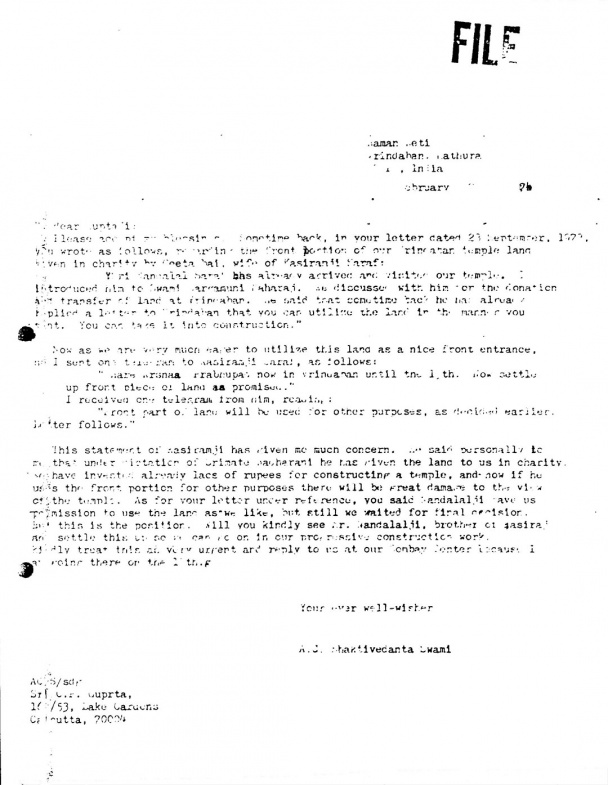 
My dear Guptaji:
Please accept my blessings. Sometime back, in your letter dated 23 September, 1973, you wrote as follows, regarding the front portion of our Vrindaban temple land given in charity by Geeta bai, wife of Kasiramji Saraf:
"Sri Nandalal Saraf has already arrived and visited our temple. I introduced him to Swami Gargamuni Maharaj. We discussed with him for the donation and transfer of land at Vrindaban. He said that sometime back he has already replied a letter to Vrindaban that you can utilize the land in the manner you want. You can take it into construction."

Now as we are very much eager to utilize this land as a nice front entrance, so I sent one telegram to Kasiramji Saraf, as follows:
"Hare Krsna Prabhupad now in Vrindaban until the 13th. Now settle up front piece of land as promised."
I received one telegram from him, reading:
"Front part of land will be used for other purposes, as decided earlier. Letter follows."

This statement of Kasiramji has given me much concern. He said personally to me that under dictation of Srimate Radharani he has given the land to us in charity. We have invested already lacs of rupees for constructing a temple, and now if he uses the front portion for other purposes there will be great damage to the view of the temple. As for your letter under reference, you said Nandalalji gave us permission to use the land as we like, but still we waited for final decision. But this is the position. Will you kindly see Mr. Nandalalji, brother of Kasiraj and settle this up so we can go on in our progressive construction work. Kindly treat this as very urgent and reply to us at our Bombay Center because I am going there on the 13th.