740307 - Letter to Muralidhara written from Mayapur 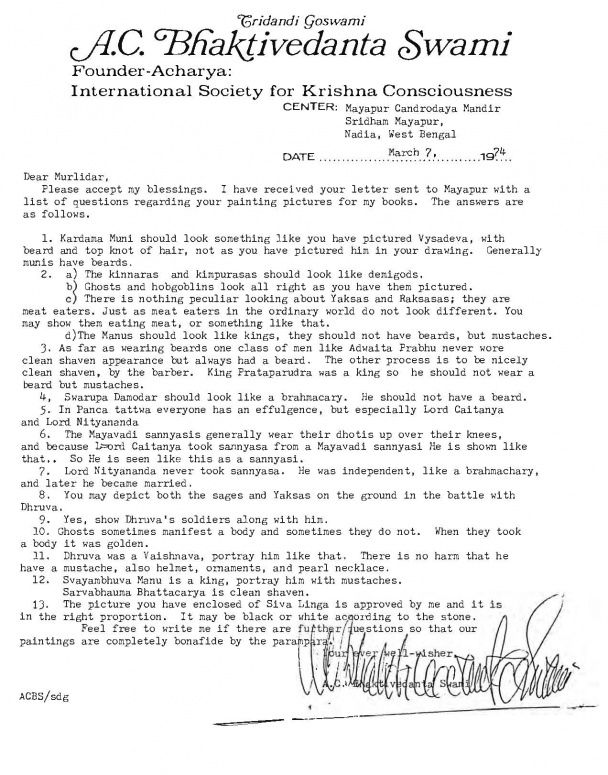 Dear Murlidar,
Please accept my blessings. I have received your letter sent to Mayapur with a list of questions regarding your painting pictures for my books. The answers are as follows.

1. Kardama Muni should look something like you have pictured Vysadeva, with beard and top know of hair, not as you have pictured him in your drawing. Generally munis have beards.
2. a) The kinnaras and kinpurasas should look like demigods.
b) Ghosts and hobgoblins look all rights as you have them pictured.
c) There is nothing peculiar looking about Yaksas and Raksasas; they are meat eaters. Just as meat eaters in the ordinary world do not look different. You may show them eating meat, or something like that.
d) The Manus should look like kings, they should not have beards, but mustaches.
3. As far as wearing beards one class of men like Adwaita Prabhu never wore clean shaven appearance but always had a beard. The other process is to be nicely clean shaven, by the barber. King Prataparudra was a king so he should not wear a beard but mustaches.
4. Swarupa Damodar should look like a brahmacary. He should not have a beard.
5. In Panca-tattwa everyone has an effulgence, but especially Lord Caitanya and Lord Nityananda
6. The Mayavadi sannyasis generally wear their dhotis up over their knees, and because Lord Caitanya took sannyasa from a Mayavadi sannyasi He is shown like that.. So He is seen like this as a sannyasi.
7. Lord Nityananda never took sannyasa. He was independent, like a brahmachary, and later he became married.
8. You may depict both the sages and Yaksas on the ground in the battle with Dhruva.
9. Yes, show Dhruva's soldiers along with him.
10. Ghosts sometimes manifest a body and sometimes they do not. When they took a body it was golden.
11. Dhruva was a Vaishnava, portray him like that. There is not harm that he have a mustache, also helmet, ornaments, and pearl necklace.
12. Svayambhuva Manu is a king, portray him with mustaches.
Sarvabhauma Bhattacarya is clean shaven.
13. The picture you have enclosed of Siva Linga is approved by me and it is in the right proportion. It may be black or white according to the stone.
Feel free to write me if there are further questions so that our paintings are completely bonafide by the parampara.
Your ever well-wisher,