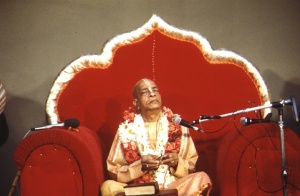 (break) . . . must have undergone severe austerities and penances and developed his spiritual consciousness. Then he can be priest. Not any man with a sacred thread and ghaṇṭā, belling, become a priest. (break) . . . priestly class, all rotten class. In Christian world also—drunkards, nonsense, woman-hunters, and they are priests. So also in India. Any man with a two-paisa-worth sacred thread, he becomes a brahmin and priest. How the people will be guided? The priest . . . the exact Sanskrit name is puro-hita, who can actually . . .

Prabhupāda: No, not puru-bhāga. Pura, yes - pura-bhāga, for welfare. By his advice . . . just like Gargamuni is called for the advice, future of the child.

Indian man (1): (Bengali: What a person can do living like a Puru-bhāgata?)

Prabhupāda: Ah, hita-kārtṛkā (break) . . . vacate his chair to receive a brāhmaṇa, a puro-hita. Just like Sudāmā Vipra went Dvārakā. He was poor man, but he was brahmin. Immediately Kṛṣṇa left His . . . offered His chair. Yes. And Rukmiṇī began to fan him. So much respect. Where is that respectful person? (aside) Hare Kṛṣṇa.

Girirāja: "He received Gargamuni with the feeling of one who is worshiping God or the Supreme Personality of Godhead. He offered him a nice sitting place, and when he sat down Nanda Mahārāja offered him a warm reception." (break)

Prabhupāda: . . . presence of a brāhmaṇa, of a sannyāsī in the household, in the house of a householder, means to enlighten. Mahad-vicalanaṁ nṛnām gṛhinām gṛhacet dīna-cetasām (SB 10.8.4). The gṛhastha, they are very cripple-minded. They are satisfied with the family, and they do not know that anything else to do. Therefore it is the duty of the sannyāsī and the brahmin to go to the householders' home and enlighten them spiritually. Therefore puro-hita. Go on. (break) . . . pura. Pura-sāra means "in the front", and hita means welfare. So one who conducts welfare of the householder, guru-puro-hita. Every family must have guru and puro-hita for spiritual advancement. (aside) Hare Kṛṣṇa. Jaya.

Girirāja: ". . . in household duties and are forgetting our real duty of self-realization.' " (break)

This is gṛhamedhi. Gṛheṣu gṛhamedhinām. Vedic culture is that one must rise early in the morning. And even Kṛṣṇa in His gṛhastha life, immediately He rose up. Rukmiṇī was disturbed because womanly nature, and again immediately taking bath, meditation. This is Vedic culture. And sleeping up to seven, and then unless takes bed tea, without washing teeth, and he is advanced. You see. And if one is asked to "Rise early in the morning and wash yourself, take your bathing and attend maṅgala ārati," "Oh, this is old way. Bhajana nonsense." You see. Gṛheṣu gṛhamedhinām. Girirāja: "Actually a saintly person or a brāhmaṇa has no business visiting householders who are busy in the matter of dollars and cents." (break)

Prabhupāda: But that is now neglected.

Dr. Patel: So we have come.

Prabhupāda: Oh, thank you very much.

Prabhupāda: It is better remain a fool. That is very progressive.

Prabhupāda: But "I am fool, I must receive." That . . . these Sikh section. The Sikh means you always learn. Sikh, śikṣa. Go on. (break)

Girirāja: ". . . one who is expert in the knowledge of the Supreme."

Dr. Patel: Not those born in brāhmaṇa families, they are not brāhmaṇas. (break)

Prabhupāda: Nanda Mahārāja did not know who is Kṛṣṇa.

Dr. Patel: When did he know that He, Kṛṣṇa, was really the son of Devakī? I think after the . . . just now only.

Prabhupāda: Just now only. He is disclosing. He has given . . . (break) . . . bahūni me janmāny vyatītāni tava cārjuna (BG 4.5). Same thing. "I had many, many births before." That is confirmed here.

Girirāja: "Just as demigods are always protected by Lord Viṣṇu, so the devotees of your child will always be protected by Nārāyaṇa." (break)

Dr. Patel: They do all sorts of things. (break)

Prabhupāda: Without any advertisement, without any . . . how one can stop this?

Girirāja: " 'The child is very clever. After breaking the pot He has left this place fearing punishment.' After she sought all over she found a big wooden grinding mortar kept upside down, and she found her son sitting on it. He was taking butter which was hanging from the ceiling on a swing and was feeding it to the monkeys. She saw Kṛṣṇa looking this way and that way in fear of her because He was conscious of His naughty behavior. After seeing her son so engaged, she very silently approached Him from behind. Kṛṣṇa, however, quickly saw her coming to attack Him with a stick in her hand, and immediately He got down from the grinding mortar and began to flee in fear. Mother Yaśodā chased Him to all corners, trying to capture the Supreme Personality of Godhead, who is never approached even by the meditations of great yogīs. In other words, the Supreme Personality of Godhead, Kṛṣṇa, who is never caught by the yogīs and speculators, was playing just like a little child for a great devotee like Yaśodā. Mother Yaśodā, however, could not easily catch the fast-running child because of her thin waist and heavy body. Still she tried to follow Him as fast as possible. Her hair loosened, and the flowers in her hair fell to the ground. Although she was tired, she somehow reached the naughty child and captured Him. When He was caught, Kṛṣṇa was almost on the point of crying. He smeared His hands over His eyes, which were anointed with black eye cosmetics. The child saw His mother's face while she stood over Him, and His eyes became restless from fear. Mother Yaśodā could understand that Kṛṣṇa was unnecessarily afraid, and for His benefit she wanted to allay His fears. Being the topmost well-wisher of her child, Mother Yaśodā began to think . . ."

Girirāja: " . . . if the child is too fearful of me, I don’t know what will happen to Him.' Mother Yaśodā then threw away her stick. In order to punish Him, Mother Yaśodā thought to bind His hands with some ropes.

Girirāja: "She did not know it but it was actually impossible for her to bind the Supreme Personality of Godhead. Mother Yaśodā was thinking that Kṛṣṇa was her tiny child; she did not know that the child had no limitation. There is no inside or outside of Him, nor beginning or end. He is unlimited and all-pervading. Indeed, He is Himself the whole cosmic manifestation. Still, mother Yaśodā was thinking of Kṛṣṇa as her child. Although He is beyond the reach of all senses, she endeavored to bind Him up to a wooden grinding mortar. But when she tried to bind Him, she found that the rope she was using was too short-by two inches. She gathered more ropes from the house and added to it . . ."

Girirāja: "Still, mother Yaśodā was thinking of Kṛṣṇa as her child. Although He is beyond the reach of all senses, she endeavored to bind Him up to a wooden grinding mortar. But when she tried to bind Him, she found that the rope she was using was too short-by two inches. She gathered more ropes from the house and added to it, but at the end she found the same shortage. In this way, she connected all the ropes available at home, but when the final knot was added, she saw that it was still two inches short. Mother Yaśodā was smiling, but she was astonished. How was it happening?

In attempting to bind her son, she became tired. She was perspiring, and the garland on her head fell down. Then Lord Kṛṣṇa appreciated the hard labor of His mother, and being compassionate upon her, He agreed to be bound by the ropes. Kṛṣṇa, playing as a human child in the house of mother Yaśodā, was performing His own selected pastimes. Of course no one can control the Supreme Personality of Godhead. Pure devotee surrenders himself unto the lotus feet of the Lord, and who may either protect or vanquish the devotee. But for his part, the devotee never forgets his own position of surrender. Similarly, the Lord also feels transcendental pleasure by submitting Himself to the protection of the devotee. This was exemplified by Kṛṣṇa's surrender unto His mother, Yaśodā.

Kṛṣṇa is the supreme bestower of all kinds of liberation to His devotees, but the benediction which he bestowed upon mother Yaśodā was never experienced even by Lord Brahmā or Lord Śiva or the goddess of fortune.

The Supreme Personality of Godhead, who is known as the son of Yaśodā and Nanda Mahārāja, is never so completely known to the yogīs and speculators. But He is easily available to His devotees. Nor is He appreciated . . ."

Girirāja: "Nor is He appreciated as the supreme reservoir of all pleasure by the yogīs and speculators. After binding her son, mother Yaśodā engaged herself in household affairs. At that time, bound up to the wooden mortar, Kṛṣṇa could see a pair of trees before Him which were known as arjuna trees. The great reservoir of pleasure, Lord Śrī Kṛṣṇa, thought to Himself, 'Mother Yaśodā first of all left Me without feeding Me sufficient milk, and therefore I broke the pot of yogurt and distributed the stock butter in charity to the monkeys. Now she has bound Me up to a wooden mortar. So I shall do something more mischievous than before.' " (break)

Indian Man (1): In India about 70% of cows are affected, infected with tuberculosis.

Indian Man (1): In India, cows are not suffering as much tuberculosis as they are suffering in America. (end)