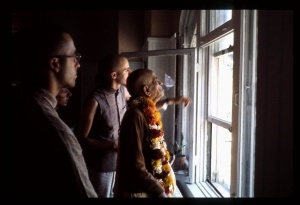 Pradyumna: Translation: "Some yogīs perfectly worship the demigods by offering different sacrifices to them, and some of them offer sacrifices in the fire of the Supreme Brahman."

Prabhupāda: There are different types of yajña, sacrifices, and the person who offers sacrifices, he is called yogī. Daivam evāpare yajñaṁ yoginaḥ paryupāsate. Yajñam and yoginaḥ. Generally, the Vedas are divided into three types of yajña: karma-kāṇḍa, jñāna-kāṇḍa and upāsanā-kāṇḍa. Generally, the yajñas are performed for satisfying the Supreme Personality of Godhead. But one who hasn't got the chance of understanding the Supreme Personality of Godhead, they offer different types of yajña for satisfying the demigods.

Here it is said, daivam: "in the matter of satisfying the different demigods." In the śāstra it is recommended . . . after all, performance of yajña means to get the necessities of life. In the śāstra it is recommended that, "If you want this type of benefit, then you offer yajña or try to satisfy this kind of demigod." There is a list in the Śrīmad-Bhāgavatam, "If you want education, you worship this demigod; if you want very beautiful wife, then you worship this goddess; if you want good health, then you worship this demigod, if you want victory . . ." So many ways. And we have got different types of demands. So . . . but that is recommended in the śāstra, in the Vedas, because gradually, one has to be taken to the transcendental position. To worship a type of demigod for certain type of benefit, at least it indicates that you can get the benefit from higher authorities. Indirectly the higher authority is accepted. Or otherwise we become atheist.

To save the general people from atheism, there is recommendation for worshiping different types of demigods. Generally, they are recommended, five: the sun-god, the Gaṇeśa, the Viṣṇu, Lord Śiva and Durgā, and . . . the sun-god I have already said. Five, pañcopāsanam. Five - the sun-god, the Gaṇeśa, and the Durgā-devī, then Lord Śiva, and then Viṣṇu. This is also gradual evolutionary. People in the most lowest stage of humanity, they are struck with wonder by the power. As soon as there is some electricity, they feel some power. So when there are power worshiper . . . the modern scientists, they are power worshiper. They have gone up to the sun-god. Not god; the sun globe. The power is received from the sunshine. So this is one stage, power. In this way, one after another, when one comes to the supreme powerful, Viṣṇu, because that is the ultimate powerful.

So this is one type of yajña, understanding the supreme power. Just like I was talking a few minutes before, the power. But power is not ultimate. Ultimate is the conductor of power, or the powerful. Just like electricity. Electricity is power, but it is generated from the powerhouse. People generally understand that electricity is coming from the powerhouse. But the powerhouse is maintained by the resident engineer, a person. That is real understanding. Or just like this airplane is flying in the sky. A child may see what a wonderful machine is flying in the sky. He does not know the importance of the pilot. The big, gigantic airship can fly in the sky so long the powerful, or one who knows how to conduct the power, pushing the button. By pushing one button, the plane goes high, and pushing another button, it comes down. It is not automatically. Any machine you take. Nowadays wonderful machine, computer. That is also handled by an expert. Any machine you take, without an expert technologist, it cannot work.

So similarly, if you go on studying the power of material nature, you'll come ultimately to the Supreme Personality of Godhead. That is explained in the Bhagavad-gītā.

Actually, Kṛṣṇa, Kṛṣṇa says mayā, "By Me," adhyakṣeṇa, "by My superintendence," mayādhyakṣeṇa, "everything is working." That is also confirmed in the Brahma-saṁhitā, sṛṣṭi-sthiti-pralaya-sādhana-śaktir ekā chāyeva yasya bhuvanāni bibharti durgā (Bs. 5.44). This power, material nature, is called Durgā. So Durgā, the material nature . . . Durgā means the predominating deity of this fort. Durgā. Durgā means "fort." And durgā means "where it is very difficult to enter." The fort is fortified. Therefore it is called Durgā . . . (indistinct) . . . ga means going, and duḥ means difficult. Therefore fort is . . . the Sanskrit name of fort is called durgā. And the predominating deity, it is called Durgā.

Similarly, this material world, universe, it is covered by seven layers, and one layer, the first layer is there, and the second layer is ten times thicker than the first layer. The third layer is ten times thicker than the second layer. In this way, this universe is covered tight, very fortified. And there are innumerable universes. They are clustered together. And all these universes together is called the material world. And this is a very fortified place, and the predominating deity of this material world, Sṛṣṭi-sthiti-pralaya-sādhana-śaktir ekā. There is a power. That is called Durgā.

Although this Durgā is so powerful that she can create, she can maintain and she can dissolute the whole cosmic manifestation . . . it is so powerful. At any moment it can dissolute. But she is working just like chāyeva. Chāya means shadow. Just like you have your hand, and here is the shadow. If the hand moves, then shadow moves. Therefore it is said, chāyeva yasya to God. By his act. Estimating his activities, then this name Kṛṣṇa is the most perfect name. Impersonalists, they say that God has no name. We also accept that. God has no name but his name is given, there are Viṣṇu-sahaśranāma, name, thousands of names. But how one man can be, or one person can have thousand names. We can very easily understand, just like a person working as High Court judge, here . . . there he is addressed, "My Lord," and amongst the friends he is addressed by the name. Or at house, by his wife, or by the children he is addressed as father. In this way he might have many names but the person is one. Similarly although there are Viṣṇu sahasranāma, the person is the same and the proper name . . . act . . . factual name is Kṛṣṇa. Kṛṣṇa means all attractive, supreme, paraṁ brahma. These are described in the śastra, so all the big authorities in spiritual science, they are . . . (break) (end)