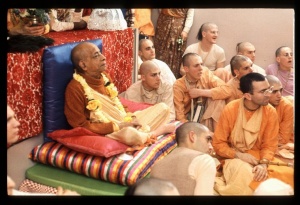 (Translated from Hindi into English)

I do not have much practice to speak in Hindi but I will try to speak something. In your temple, Hanuman gym temple, when I was coming I was very pleased that the name of Hanumanji is there. Hanumanji, Bajrangaji, is our guru, Vaisnava sampradaya. Although Hanumanji was not even a human being but still because of being the purposeful servant of Lord Ramachandra, Hanumanji is considered guru in the Vaisnava disciplic succession.

So why did Hanumanji become famous? He was famous because the bodily strength that he had, he used that bodily strength to serve Lord Ramachandra. So devotional service, Kṛṣṇa consciousness is not one sided, it is all sided. When the Lord incarnates, when Lord Ramachandra also came, and Lord Kṛṣṇa came, and other incarnations Nrsingha, Varaha, etc. two reasons - paritrāṇāya sādhūnāṁ vināśāya ca duṣkṛtām (BG 4.8), go along together.

Just like government is there. The government suppresses the miscreants and maintains the law-abiding citizens. Similarly the Lord also has the same rule, suppress the miscreants and maintain the law-abiding citizens. paritrāṇāya sādhūnāṁ vināśāya ca duṣkṛtām. Similarly to serve the Lord there is a need for Hanumanji, Arjuna is also needed.

A few days ago a gentleman attacked us that this Hare Kṛṣṇa movement, just sit down and do kirtana, and make people useless. By becoming a Vaisnava a person is rendered useless. So I had replied to him that you have not see a Vaisnava. In Bharatvarsa the two wars that have happened, Rama-Ravana and Kuruksetra. In these two wars the heroes Hanumanji and Arjuna they were not sitting around uselessly. If Ravana was there, to suppress Ravana all kinds of strength was used.

So a Vaisnava under the order of the Lord, as the Lord desires, can sit down and chant Hare Kṛṣṇa mantra and if need be can fight with demons like Ravana. So this is a Vaisnava. sarva vyapaka, not one sided only, from all sides.

So in this gym of yours, bodily strength how it is used, like you are teaching, alongside you also teach how to use this strength in the service of the Lord. Then only it will be meaningful. This is the injunction of the scriptures. In the Bhagavatam it is said ataḥ pumbhir dvija-śreṣṭhā varṇāśrama-vibhāgaśaḥ (SB 1.2.13), varṇa and āśrama divisions must be there in human society. That is brāhmaṇa, kṣatriya, vaiśya and śūdra. They are all needed. Just like for the body the head is required, arm is required, legs are required, stomach is required. If only stomach is left, only head is left, then things will not work. Everything is required.

So all of you, this gym, to make the body healthy, if need be fight with the enemy is the business of a kṣatriya. yuddhe cāpy apalāyanam (BG 18.43). The kṣatriyas lead from the front in the wars, they don’t run away. That is ksatriya – body has strength, energetic, vigor – then only this is possible. This should also be taught. This is required.

But whether brāhmaṇa, kṣatriya, vaiśya and śūdra, there is no fault in being any of these, all of them should be engaged in the service of the Lord. That is perfection.

ataḥ pumbhir dvija-śreṣṭhā, these are the words of Bhagavatam. Suta Goswami, in the assembly of exalted brāhmaṇas in Naimisaranya, a very big assembly that went on for a thousand years. So in that assembly Suta Goswami gave this principle dvija-śreṣṭhā, all of you exalted brāhmaṇas are sitting here, the principle of scriptures is this. What? ataḥ pumbhir dvija-śreṣṭhā varṇāśrama-vibhāgaśaḥ. In the human society there must be varṇāśrama. Otherwise it is an animal society.

So in the animal society a human being can never be happy. It should be a human society. In the human society these four things must be there, not four, eight. varṇa and āśrama – four varṇa and four āśrama. brāhmaṇa, kṣatriya, vaiśya and śūdra – these four varṇa and brahmacārī, gṛhastha, vānaprastha and sannyāsa. This is very scientific. If we leave this then it becomes an animal society. If we don’t follow the varṇāśrama dharma we will not advance in any field.

So similarly this divisions of varṇāśrama so what is it’s perfection? Perfection is hari-toṣaṇam (SB 1.2.13). ataḥ pumbhir dvija-śreṣṭhā varṇāśrama-vibhāgaśaḥ svanuṣṭhitasya dharmasya saṁsiddhir hari-toṣaṇam (SB 1.2.13). So do exercise, regularly, make the body strong, that is also required. But that bodily strength use it for the pleasure of the Lord, nothing else. I have a lot of bodily strength, I become a ruffian, trouble others, that is no use. Whatever you do, one needs to perfect it hari-toṣaṇam, for the pleasure of the Lord. hari-toṣaṇam, one must please the Lord.

This Kṛṣṇa consciousness movement is multi faceted. We can serve the Lord using everything. prāṇair arthair dhiyā vācā śreya-ācaraṇaṁ sadā (SB 10.22.35) this is the purpose. With life, with wealth, with intelligence, with words, in every way service to the Lord. We want, we also want to open a school for varṇāśrama, in Europe, four varṇa and four āśrama. Just like there is a school, college for engineering, school and college for medical, other branches, department of knowledge. In the same way there should be a school, college for brāhmaṇa also. How to become a brāhmaṇa. Similarly we should have for kṣatriya also. How to become a kṣatriya. Similarly for vaiśyas also.

Similarly the kṣatriyas make their body strong through practice that is quality and after acquiring this quality kṣatriya has activity also. Then that is complete. And if the activity is to serve the Lord then saṁsiddhir hari-toṣaṇam. sve sve karmaṇy abhirataḥ saṁsiddhiṁ labhate naraḥ (BG 18.45). To achieve perfection according to the divisions of varṇāśrama, according to ones propensity, make them an expert, one should be very expert in doing all types of work. And after becoming an expert if that is engaged in the service of the Lord that is called perfection. Because the human form of life is to achieve perfection. And the animal life is eat, drink, beget children and die. That is animal life. And human form of life is to achieve perfection. What is that perfection? saṁsiddhiṁ labhate naraḥ (BG 18.45), abhyarcya, yena sarvam idaṁ tatam (BG 18.46). That Supreme Lord should be pleased and thereby one should achieve perfection.

So this is my request that along with the bodily exercises chant the Hare Kṛṣṇa maha-mantra.