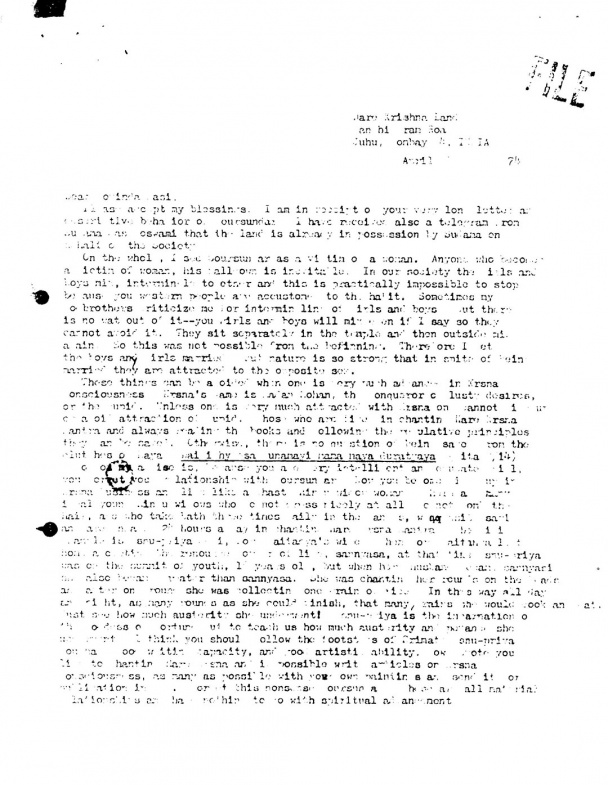 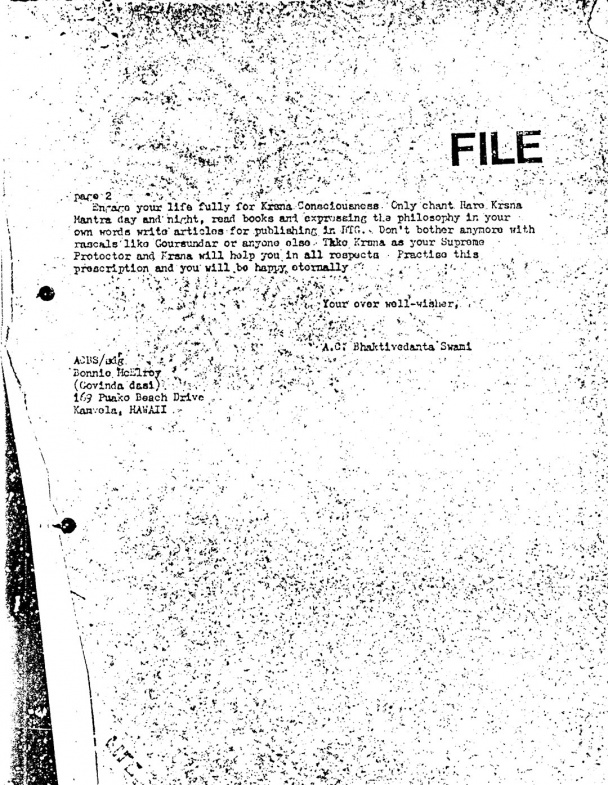 Dear Govinda dasi,
Please accept my blessings. I am in receipt of your very long letter and descriptive behavior of Gourasundar. I have received also a telegram from Sudama das Goswami that the land is already in possession by Sudama on behalf of the Society.
On the whole, I see Gourasundar as a victim of a woman. Anyone who becomes a victim of woman, his falldown is inevitable. In our society the girls and boys mix, intermingle together and this is practically impossible to stop because you western people are accustomed to the habit. Sometimes my Godbrothers criticize me for intermingling of girls and boys. But there is no way out of it--you girls and boys will mix even if I say so they cannot avoid it. They sit separately in the temple and then outside mix again. So this was not possible from the beginning. Therefore I get the boys and girls married. But nature is so strong that in spite of being married they are attracted to the opposite sex.
These things can be avoided when one is very much advanced in Krsna Consciousness. Krsna's Name is Madan Mohan, the conqueror of lusty desires, or the cupid. Unless one is very much attracted with Krsna one cannot give up or avoid attraction of Cupid. Those who are fixed in chanting Hare Krsna Mantra and always reading the books and following the regulative principles they can be saved. Otherwise, there is no question of being saved from the clutches of Maya. Daivi hy esa gunamayi mama maya duratyaya (Gita 7,14).
To you my advice is, because you are very intelligent and educated girl, you forget your relationship with Gourasundar. Now you become mixed up in Krsna business and live like a chaste Hindu widow woman. There are many ideal young Hindu widows who do not dress nicely at all, do not comb the hair, and who take bath three times daily in the Ganges, wear white sari and are engaged 24 hours a day in chanting Hare Krsna Mantra. The vivid example is Visnupriya devi, Lord Caitanya's wife. When Lord Caitanya left home accepting the renounced order of life, sannyasa, at that time Visnupriya was on the summit of youth, 16 years old, but when her husband became sannyasi she also became greater than sannyasa. She was chanting her rounds on the beads and after one round she was collecting one grain of rice. In this way all day and night, as many rounds as she could finish, that many grains she would cook and eat. Just she how much austerity she underwent! Visnupriya is the incarnation of the Goddess of Fortune but to teach us how much austerity and penance she underwent, I think you should follow the footsteps of Srimati Visnupriya. You have good writing capacity, and good artistic ability. Now devote your life to chanting Hare Krsna and if possible write articles on Krsna Consciousness, as many as possible with your own paintings and send it for publication to BTG. Forget this nonsense Gourasundar. These are all material relationships and have nothing to do with spiritual advancement.

Engage your life fully for Krsna Consciousness. Only chant Hare Krsna Mantra day and night, read books and expressing the philosophy in your own words write articles for publishing in BTG. Don't bother anymore with rascals like Gourasundar or anyone else. Take Krsna as your Supreme Protector and Krsna will help you in all respects. Practice this prescription and you will be happy eternally.