740505 - Letter A to Jayatirtha written from Bombay 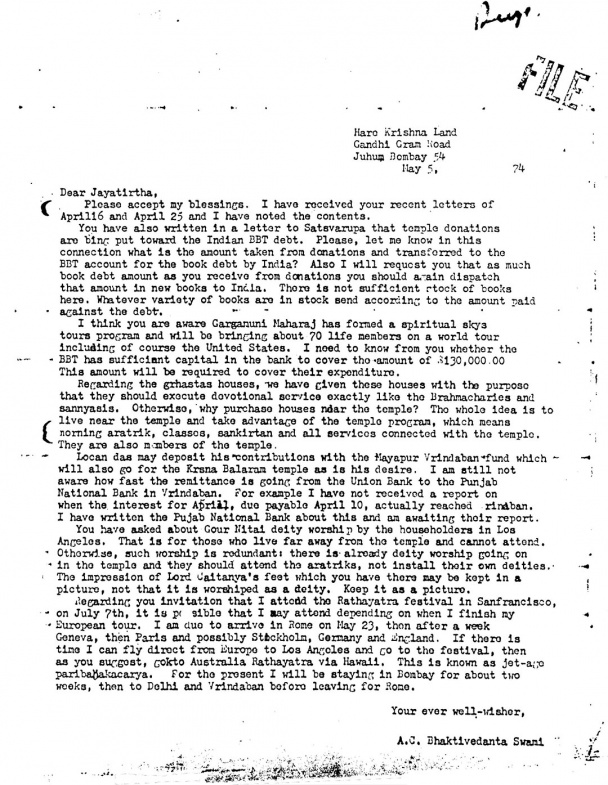 Dear Jayatirtha,
Please accept my blessings. I have received your recent letters of April 16 and April 25 and have noted the contents.
You have also written in a letter to Satsvarupa that temple donations are being put toward the Indian BBT debt. Please, let me know in this connection what is the amount taken from donations and transferred to the BBT account for the book debt by India? Also I will request you that as much book debt amount as you receive from donations you should again dispatch that amount in new books to India. There is not sufficient stock of books here. Whatever variety of books are in stock send according to the amount paid against the debt.
I think you are aware Gargamuni Maharaj has formed a spiritual sky tours program and will be bringing about 70 life members on a world tour including of course the United States. I need to know from you whether the BBT has sufficient capital in the bank to cover the amount of $130,000.00. This amount will be required to cover their expenditure.
Regarding the grhasthas houses, we have given these houses with the purpose that they should execute devotional service exactly like the Brahmacharies and sannyasis. Otherwise, why purchase houses near the temple? The whole idea is to live near the temple and take advantage of the temple program, which means morning aratrik, classes, sankirtan and all services connected with the temple. They are also members of the temple.
Locan das may deposit his contributions with the Mayapur Vrindaban fund which will also go for the Krsna Balaram temple as is his desire. I am still not aware how fast the remittance is going from the Union Bank to the Punjab National Bank in Vrindaban. For example I have not received a report on when the interest for April, due payable April 10, actually reached Vrindaban. I have written the Punjab National Bank about this and am awaiting their report.
You have asked about Gour Nitai deity worship by the householders in Los Angeles. That is for those who live far away from the temple and cannot attend. Otherwise, such worship is redundant; there is already deity worship going on in the temple and they should attend the aratriks, not install their own deities. The impression of Lord Caitanya's feet which you have there may be kept in a picture, not that it is worshiped as a deity. Keep it as a picture.
Regarding your invitation that I attend the Rathayatra festival in San Francisco, on July 7th, it is possible that I may attend depending on when I finish my European tour. I am due to arrive in Rome on May 23, then after a week Geneva, the Paris and possible Stockholm, Germany and England. If there is time I can fly directly from Europe to Los Angeles and go to the festival, then as you suggest, go to Australia Rathayatra via Hawaii. This is known as jet-age parivrajakacarya. For the present I will be staying in Bombay for about two weeks, then to Delhi and Vrindaban before leaving for Rome.

P.S. I want the monthly interest from the Union Bank to go to account 668 at the Punjab National Bank, Vrindaban, called "ISKCON Mayapur-Vrindaban Trust Fund". At present they are sending the interest to the account number 6112. "A.C. Bhaktivedanta Swami". So please go to the Union Bank and find out how this change may be brought about and and let me know.

Also I am enclosing a check for $21.00 (twenty one dollars) which I have received here. I want you to deposit this for me in the Union Bank, ISKCON MVT, and the savings deposit slip is enclosed.